The headlines are breathless: “Gene-edited CRISPR mushroom escapes US regulation: A fungus engineered with the CRISPR–Cas9 technique can be cultivated and sold without further oversight.” So Nature magazine announced a recent decision by the biotechnology products regulatory division of the U.S. Department of Agriculture. The herd followed suit.

Let us pray that it does not frighten the horses.

The Twitterverse predictably erupted with lamentations and alarums, predictions of doom, and condemnations of the “outdated” regulatory system under which this miscarriage was promulgated. The Washington Post declaimed, “A new fungus shows just how murky our understanding of the technology – and our policy surrounding it – remains.” The reporter may be confused, but neither our understanding of the technology nor the relevant policy is at all “murky.” The idea that an innovation solving a problem might not present sufficient hazard to justify a requirement for pre-market approval seems unimaginable to some. It is clearly time to revisit the raison d’etre of government regulation.

The entire point of regulation is to mitigate hazard and manage risk. The definition of risk is exposure to a hazard. If there is no hazard, if danger is lacking, trivial, impossible to imagine, there can be no risk, and government regulation cannot be justified.

So what, exactly, is the hazard presented by this CRISPR-tweaked mushroom that threatens equine equanimity? 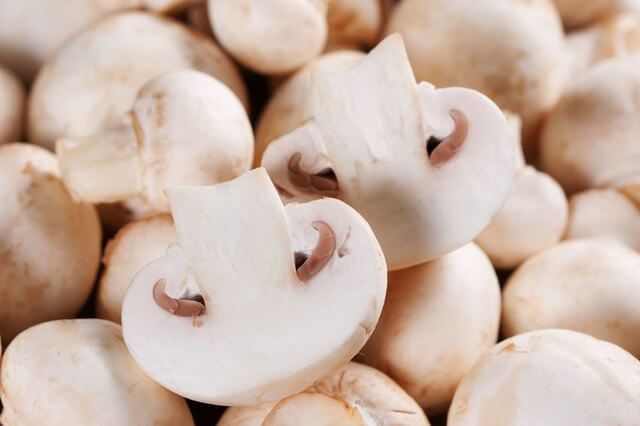 The innovators describe their “Frankenfungi” as a “transgene free, anti-browning white button mushroom (Agaricus bisporus).” They have improved it for human use by using CRISPR/Cas9 techniques to produce several “small deletions (1-14bp) in a specific polyphenol oxidase [PPO] gene.” The deletions disable the function of the enzyme polyphenol oxidase (PPO), which causes browning in some fruits when they are exposed to air, but otherwise lacks any indispensable role in plant metabolism. The main impact of the presence of this enzyme, from the human point of view, is to exacerbate food waste. There are no data to suggest its absence leads to any significant consequence beyond reducing spoilage. Though widely found in plants, it is not ubiquitous, and its metabolic functions are duplicated by a plethora of functionally similar proteins that obviously take up whatever metabolic slack may result from its removal. It seems to be a molecular analogue of male nipples but without the ornamental value.

The innovators responsible for this nifty idea, which actually delivers a solution to the problem du jour, food waste, wisely thought to consult with U.S. Department of Agriculture (USDA) before moving further towards the market. They availed themselves of a bona fide innovation in regulatory policy for which USDA deserves praise: the “Am I regulated?” service. Innovators unsure whether their idea would require extensive regulatory review can ask the Animal and Plant Health Inspection Service (APHIS) if their product would fall under the onerous and expensive regulations inexplicably aimed at plant seeds improved through some biotechnology methods, or be exempted from such due to the lack of any demonstrated potential for hazard, as are all varieties derived from “conventional” breeding (which means, essentially, techniques used before 1996…). So they sent APHIS an inquiry. APHIS considered their query and provided a rational response which stated that absent any imaginable hypothesis through which this cultivated mushroom might present a hazard, APHIS decided further regulatory scrutiny could not be justified. So let us review: Mushroom developers submitted an idea to the scrutiny of regulatory authorities who, unable to imagine any hazard, real or conjured, responded they could conceive of no additional information which, if scrutinized, would decrease a risk that looked like zero in the first place. Is this what a reasonable person would understand to fit the description of an “escape from regulation”?

There is actually nothing really new here. We have seen products like this before. Folks may remember the Arctic® Apple, a PPO null variety developed by Okanagan Specialty Fruits, a small entrepreneurial company in Canada, to eliminate browning of cut fruit and thus reduce food waste and encourage more fruit consumption by finicky toddlers. Most folks will not have encountered the Arctic® Apple yet (soon, soon…), but is there anybody who is not familiar with sultanas, the ubiquitous golden raisin? Turns out a natural mutation in grapes inactivated the PPO gene by a much clumsier and less precise method than was used to improve  the apple and the mushroom. In addition to shutting down the PPO gene/enzyme, this entailed a host of cascading effects including the production of novel protein that completely escaped any scrutiny for toxicity or allergenicity. Nevertheless, this novel product “escaped” regulation entirely and has become omnipresent in markets around the world since its introduction. In 1962.

The same kind of “loss of function” varieties are found “naturally” in some lines of wheat (itself a completely human-made product of hybridization by humans). Wheat breeders have painstakingly hybridized the trait (over 15+ years) into commercially desirable strains that are now grown, exported, and consumed widely around the world. All these innovations are forms of genetic modification every bit as unnatural as anything done with today’s methods, but entirely uncontroversial. Hmmm…

Let us look closer at some of the regulatory details. APHIS specifically found the mushroom to be outside the purview of the regulations at 7 CFR 340 under which APHIS acts to prevent or manage risks to U.S. agriculture from “plant pests” or “weeds.” The definition of a “weed” is pretty easy—it’s a plant growing where a human doesn’t want it. A plant pest is not quite so clear cut, but it is clearly defined in the Plant Protection Act (PPA) as:

…any living stage of any of the following that can directly or indirectly injure, cause damage to, or cause disease in any plant or plant product:

(B) A nonhuman animal.

(G) An infectious agent or other pathogen.

(H) Any article similar to or allied with any of the articles specified in the preceding subparagraphs.

Some criticize this “plant pest” approach because it is not aimed specifically at, for example, products of recombinant DNA technologies or more recently developed tools like zinc finger nucleases, TALENs, or CRISPR-Cas9, as was the mushroom. They ignore that the breadth and flexibility of the language in the PPA give USDA enormous power to deal with genuine hazards, they dismiss U.S. regulations as “cobbled together” without actually coming to grips with the rationale or reviewing the years of consideration and thousands of pages of analysis it’s based on, and seem therefore doomed unproductively to repeat elements of the history from which they have apparently learned nothing. They have strong opinions about things of which they actually seem to know very little. Furthermore, they forget that regardless of what USDA does with this mushroom, it remains entirely subject to FDA authorities which require all food placed on the market to be safe. That requirement is inescapable.

But numerous authoritative bodies have pointed out consistently over the past three decades that there are no unique hazards from these seed improvement technologies, and any hazards they may present are familiar from experience with older techniques and can be managed with known tools (containment and/or isolation, extirpation, etc.). The Plant Protection Act prudently focuses not on process, but on an items qualities and characteristics, the phenotype of the innovation at issue. This is a regulatory trigger that actually makes sense, bears a tangible relationship to risk, and can be defended on the basis of data and experience.

The Centers for Disease Control publish a document titled Morbidity and Mortality Weekly Report in which they identify the causes and tally the toll of sickness and death that befall those living in the United States. One will search its extensive archives in vain for data to show “plant breeding” as a factor on this landscape. Fevered headlines may attract eyeballs, but at the cost of raising unjustified fears, misleading readers, and undermining sound public policy. Such outcomes do not advance the public good.

Mary Shelley wrote “Frankenstein; or, The Modern Prometheus” in 1818. She intended it as a parable of virtue misunderstood, a warning against the ill consequences and injustice of noble scientific endeavors unjustly feared and maligned by mobs. Two centuries later it remains sadly au courant.

This article originally appeared on Innovation Files here and was reposted with permission of the author.

Val Giddings is senior fellow at The Information and Technologies Innovation Center. He previously served as vice president for Food & Agriculture of the Biotechnology Industry Organization (BIO) and at the Congressional Office of Technology Assessment and as expert consultant to the United Nations Environment Programme, the World Bank, USDA, USAID, and companies, organizations and governments around the world. Follow him on twitter @prometheusgreen.