André Heitz | October 4, 2016
This article or excerpt is included in the GLP’s daily curated selection of ideologically diverse news, opinion and analysis of biotechnology innovation.

The proposed acquisition of Monsanto by Bayer raises fears and fantasies. Would the approval lead to a dangerous concentration of control over our food supply? Are those concerns reasonable?

The landscape is much more complex than the picture set out by GMO critics, many of whom see the world in black and white, or the description by some economists and especially politicians who are holding hearings on the proposed merger.

In September 2016, after months of negotiations, Bayer’s and Monsanto’s executives announced the agreement: a total cost of $66 billion, roughly 15 to 30 times Monsanto’s annual revenues  (Monsanto’s revenues have plummeted since January 2015 due to the sharp fall in agricultural prices). For Monsanto shareholders, this represented a 44 percent premium on the share price as it stood on May 9, 2016, when Bayer made its first offer; the deal is, therefore, enticing.

The move makes business sense in a consolidating sector. Grain prices have declined sharply, bringing stock values down with them and creating bargains in the process. DuPont and Dow Chemical announced a merger “of equals” in December 2015, which if approved would result in a split into three independent companies, one of which would be in agrochemicals. After the failure of negotiations last year between Monsanto and Syngenta, the latter accepted in July 2016 a takeover offer by ChemChina.

The move is also a response to the prospect of a planet projected to have some 10 billion inhabitants by the year 2050 and an agricultural sector that will have to produce, in a conservative estimate, 50 percent more food than today on roughly the same amount of arable land and under increasing environmental constraints.

Bayer and Monsanto have opened a joint website and offered the rhetoric of a bright future for shareholders, farmers and the public.

The combined company would bring together a flagship of agricultural chemistry (with other activities in its portfolio) with a world-leader genetics that has more recently diversified into other strategic areas such as integrated farming production systems and big data. The new company plans to establish research and development platforms with an annual budget of around 2.5 billion euros. That is, roughly three times the resources allocated to French agricultural research. It is also 2.5 times the budget of all the international agricultural research centers.

The anti-globalization and environmental movements have painted the merger in the gloomiest of terms. Scientists are used to it: it’s been almost 40 years – from Pat Mooney’s Seeds of the Earth: A Private or Public Resource? (1979) – that we have been warned of the Apocalypse resulting from the alleged corporate control of our food.

Le Monde, the banner of environmentalism in France, offers us an illustration of the extravagant condemnations: “The future world number one in seeds and pesticides has the ambition to control the entire agricultural chain from the seed to the consumer’s plate.” 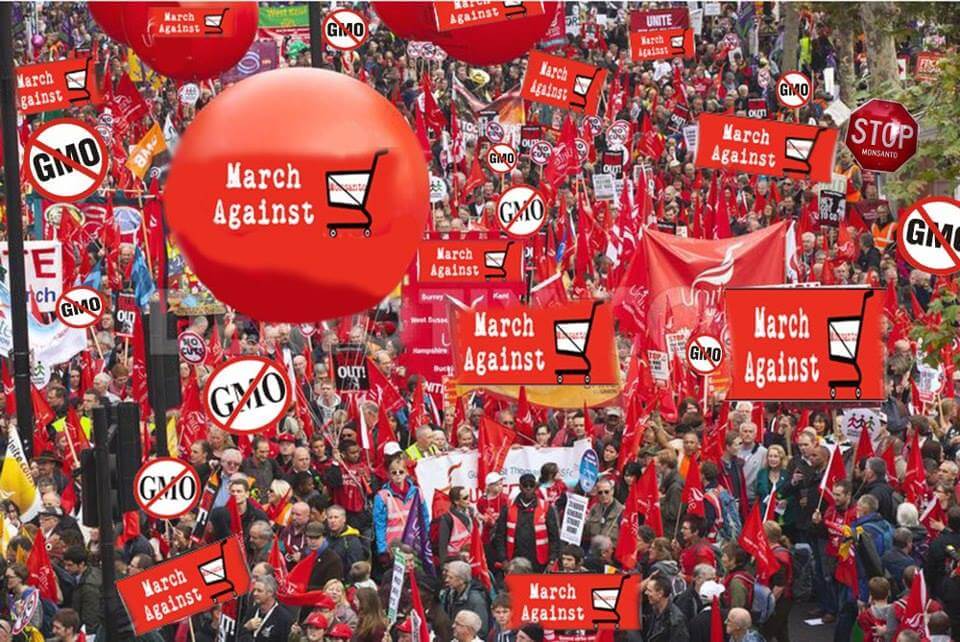 The usual array of activists has chimed in. Vandana Shiva plays the ‘Nazi card,’ calling the merger part of the “poison cartel of I.G. Farben,” which she claims can be linked to both companies:

The Farben family chemical cartel was responsible for exterminating people in concentration camps. Today the poison cartel is wearing G-Engineering clothes, and citing the mantra of ‘innovation’ ad nauseam. …

Through cross-licensing agreements, mergers and acquisitions, the biotech industry has become the I.G. Farben of today, with Monsanto in the cockpit.“

Shiva is the lady who is praised by the alternative movement as one of the great voices of ecological wisdom!

In any case, if the acquisition goes through, and the Monsanto name disappears, the alternative movement will have to find new slogans.

…and so perhaps also the world of politics

The German Greens have also voiced their opposition as expected:

This deal should not be allowed. The result is an ultra-powerful cartel which does not fight world hunger but exacerbates it […] And that’s not all. Economic power also increases the political power of Bayer and Monsanto.

Margrethe Vestager, European Commissioner for competition, said she wants farmers and consumers to have the choice between different kinds of seeds and that they “are not locked with just one producer and just one set of pesticides.”

She would have done better to check the facts beforehand. The EC database of the Community Plant Variety Office shows for maize (corn) – a very popular species among large seed companies – a list of 2,244 approved varieties since July 1995; last year, protection was granted to no less than 321 new varieties, all different and original. For wheat, the figures are 876 and 128, respectively. This is pure precautionary hysteria, political cowardice, and demagoguery.

A giant among dwarfs, or a dwarf among giants?

The acquisition of Monsanto by Bayer would allegedly create a giant in the chemical and genetic agricultural supplies sector. But in reality, the new entity remains a dwarf.

Regarding revenue Monsanto is about the same size as Whole Foods, the major North American and UK organic products distributor. Monsanto is roughly one-half of John Deere (tractors and agricultural machines), one-third the turnover size of Coca-Cola, one-fifth of Carrefour, one-sixth of Nestlé and 1/32 of Walmart. A giant in the global corporate or food sector it is not.

The haters of Monsatan – in their view Monsanto is the evilest company in the world, to the point of creating a pseudo-judicial masquerade in the Hague, the Monsanto Tribunal – claim this relative dwarf can corrupt the political leaders and decision-makers around the world! And yet, in Europe, GMO cultivation is banned almost everywhere, and the future of glyphosate is gloomy.

The deal requires clearance from regulatory and anti-trust authorities. Will the United States let Monsanto ‘fall into foreign hands’, or will politicians succumb to economic patriotism or even retaliate in the event of a failed merger of Dow and DuPont?

But let’s imagine that the Big Six became the Big Three.

According to a document from the virulently anti-GMO ETC Group, Bayer-Monsanto’s share of the agrochemical market would increase to roughly 25 percent which would put it on a par with a combined ChemChina-Syngenta. In seeds, the blended company would be 30 percent versus 23 percent for Dow-DuPont, according to activists.

But those numbers are surely wrong. They reflect only the value of seeds produced by large entities and do not take into account many factors, such as seeds the farmers generate themselves. The combined company is more likely to ‘control’ at best 10 percent of the overall seed market for a limited number of crops—hardly an anti-competitive threat.

So, should we fear a monopoly stranglehold? There are four answers.

First is the basics of business. Agricultural suppliers—these newly combined entities—would be very unwise to strangle farmers, their clients.

Second, the downstream operators – especially retailers – have a considerable amount of elbow room and do not hesitate to use it. We have already seen major retailers removing from their shelves items from “uncooperative” suppliers, and conversely, farmers emptying supermarket shelves. When farmers demonstrate, it’s mostly to oppose downstream companies, not upstream sellers.

Third, governments have tools to fight against abuses of dominant positions if problems should arise. In the case of patents, there is the threat of compulsory licenses which, if they were to be implemented, would be much simpler to enforce than the instruments of competition law.

Fourth, in this economic Kriegsspiel, we often forget the special characteristics of agriculture. Macroeconomic analysis ignores the fact that the position of a large group consists of the sum of its positions on, for example, various pesticides, each of which is for a particular crop or set of plants and has one or several targets; in the case of varieties and seeds, supply must meet agro-climatic conditions so diverse that it is almost impossible to reach a global monopoly position, or even a regional one—except if governments institute so many restrictions on cultivation that only large corporations can engage in the process.

In other words, anti-GMO activism has forced consolidation to produce companies that can afford to cover the 13 years and $150 million that it takes to bring a new genetically engineered product to market; if that situation persists, then yes, larger companies with fewer and fewer products could be the norm.

Who was Monsanto’s best ally – as well as Pioneer (DuPont)’s, Syngenta’s, etc. – in the rise of a select class of GMO suppliers? Political powers, and in the first place the Europeans with their regulations whose ulterior purpose was to prevent the cultivation of GM varieties. But while the European authorities have the power to rein in research, development, and distribution of products of inventive and innovative activity, and thus prevent the emergence of new players, it is not at all certain that the current structure is set forever. 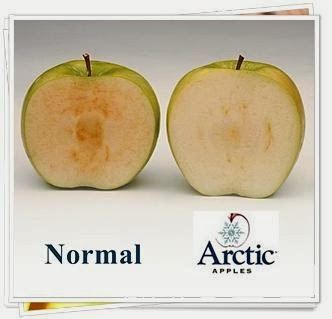 In particular, concerning GMOs, the first patents are expiring. New players can enter the market, provided that they are not choked by excessive administrative procedures, either in the areas which become patent free or in crops that have not been targeted for GM research by the larger corporations. Such is the case of Intrexon-owned Okanagan Specialty Fruits, with its Arctic apples resistant to browning. Or the JR Simplot Company’s Plant Sciences, which has developed a potato that does not turn brown, unlike “traditional” varieties, and which produces less of the carcinogen acrylamide when fried, and is blight-resistant – just remember the famines in Ireland in the 19th century.

Indian researchers have recently produced a GM cotton resistant to whitefly. In Africa, researchers in Uganda are working on a range of genetically modified plants to fight malnutrition or plant diseases which cannot be countered except through the deployment of transgenic crops.

And that’s not counting the “new plant breeding techniques” (NPBTs), including CRISPR, which does not involve the insertion of ‘foreign genes’ yet has stirred the ire of activists who would like nothing more than to see agricultural innovation stopped dead in its tracks.

In the field of plant protection and chemicals, the world order may also change rapidly. Glyphosate – stubbornly preceded by “Monsanto’s” or followed by “from Monsanto” when referred to by campaigning activists – has been out of patent for a long time, and Monsanto no longer has an extensive crop chemical product portfolio.

What matters here, finally, is that it would be a major mistake to assess the acceptability of the acquisition of Monsanto by Bayer by the current situation and its linear projection into the future.

This article is slightly adapted from a French version which appeared originally as Bayer avale Monsanto, l’altermonde reprend une aspirine

André Heitz is an agronomist and a former international civil servant in the United Nations system. He served in the Union for the Protection of New Varieties of Plants (UPOV) and the World Intellectual Property Organization (WIPO). In his last operational position, he was the director of the WIPO Coordination Office in Brussels. He blogs in French on Over-Blog.