Michelle Miller | November 21, 2016
This article or excerpt is included in the GLP’s daily curated selection of ideologically diverse news, opinion and analysis of biotechnology innovation.

As a farmer, writer, and public speaker, I work very hard to dispel the myths of modern agriculture. Over 90% of certain crop farmers here in the US are growing GMOs for good reasons which I’ve previously outlined here. So when I heard that one of the world’s most famous anti-GMO activists–Indian philosopher Vandana Shiva–was coming to my area in Iowa to speak at Drake University, I felt I need to hear what she had to say and hopefully get the opportunity in a Q&A to speak up.

And, fortunately I got my wish! She had a Q&A and I nervously approached the microphone to speak up on behalf of farmers everywhere. Shiva is known for spreading misinformation about agriculture.

If you aren’t aware of who Vandana Shiva is, or what her views are, the Genetic Literacy Project has two backgrounders, a Biotech Gallery profile here and a news report here. This is a short summary from the GLP’s profile:

Shiva responds to allegations that her initiatives and views prevent peasants from moving out of poverty and lock them into a life of “subsistence” (while she enjoys a comparatively wealthy lifestyle) with the statement, “Resource scarcity is not that bad for it renews ones commitment to human quality.” And that poverty is a culturally perceived bias against indigenous rights to subsistence by Western elites.

Shiva claims there was no hunger in India prior to the Green Revolution, which she counters was the cause of poverty, indebtedness and despair for farmers. Her claim that there was “no hunger” in India prior to the Green Revolution (typically dated in the late 1960’s-1970’s) does not jive with the facts. The Green Revolution in India started in the late 1960s and with its success the country attained food self-sufficiency within a decade. It was focused mostly on wheat production and in the Punjab region. The second wave of the Green Revolution, beginning in the 1980s, involved almost all the crops including rice and covered the whole country, raising farmer incomes and alleviating rural poverty substantially. Shiva also ignores the fact that famines in India had resulted in more than 60 million deaths over the course of the 18th, 19th and first half of the 20th centuries.

While I appreciate Vandana Shiva’s passion for the environment and crop diversity, most of her claims have been readily debunked. Her campaigns are subsidized by millions of dollars of contributions by organic food companies to spread lies about conventional agriculture to push an agenda. In my opinion, it is admirable if someone chooses to be an organic farmer–there are many ways to address  food security issues as long as we promote cooperation and coexistence–but there is something wrong with lying to people for profit, such as her debunked claims that GMOs are 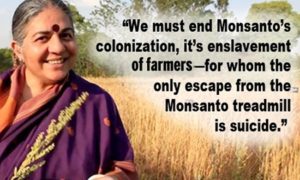 provoking Indian farmers to commit suicide. [Read GLP GMO FAQ addressing Shiva’s accusation]. She doesn’t back up her claims with reputable evidence and what she claims about conventional agriculture isn’t backed by science.

Needless to say, a huge percentage of what came out of Shiva’s mouth was myths and misrepresentations. She spent a lot of time tearing into Norman Borlaug, the scientist and ‘father of the Green Revolution–he was awarded the Nobel Peace Prize, the Presidential Medal of Freedom and the Congressional Gold Medal before his death–and is credited with saving hundreds of millions of lives, and accused farmers of being “the last caretakers of the land.” Seriously? Who does that? Shiva is no friend to modern farmers or technology. Her misinformation was appalling and needless to say I was not impressed.

It was painful to sit through her nonsense, and the whole time I was wondering if she has ever even ridden in a combine or ever been to a large scale farm a day in her life. While she railed against “industrial, chemically intensive agriculture,” I wish she knew that farmers today are using less toxic  chemicals than ever before. When complaining about soil and water quality, I wish she would connect with us and learn that farmers enroll in conservation programs and are the ultimate stewards of the land. Organic and conventional farms have a lot in common: both types of farms may or may not use chemicals, both types can do conservation methods like soil testing, crop rotation, cover crops, etc. This is not the agenda she had though. Apparently only organic farmers are concerned about sustainability, which couldn’t be further from the truth.

Feeding the world requires all types of farms. Shiva went on to say that farmers today don’t feed the world. Women in their families do. Really? Why not men? And she thinks we are going to feed 9 billion people with small scale “garden” type organic farms? Of course, she never mentioned that organic farms use chemicals too, sometimes more of them. What do we do in winter when there is snow on the ground? What about busy people, people in cities? I was floored at her ideas, she made it sound like gardens can feed the world, all the while ignoring reality that we need grocery stores and restaurants to feed the world. Quite out of touch with reality, if you ask me.

Shiva also shared the myth that GMOs kill bees, all while completely ignoring the fact that GMOs eliminate our need to spray insecticides, which helps beneficial insects. GMOs cause suicides, Monsanto is trying to poison everyone, monocultures! Patents! Seed saving! The list of myths goes on. The reality is that farmers have hundreds of seed companies to choose from, all different types of crops can have patents including organic, and today’s farmers don’t want to save seeds. My head was spinning with how disconnected she is to modern farming and how much she really doesn’t understand our industry, while she gets paid to talk about this with no formal training or educational background in agriculture. Say what, now?

But there was hope! I was happy to know that there was a Q&A afterwards and I wasn’t going to sit back and let Shiva’s false accusations go without saying something. I was NERVOUS! I probably spoke too fast and I wish I would’ve actually asked a question, but the setting was a little intimidating and my nerves got in the way a bit. I did my best to try and find any little bit of common ground and  to not come off too brash. For a link to my video, click here.

I encouraged everyone to connect with us as farmers. I took issue with her referring to pesticides as “poison,” as organic production uses pesticides too, and they are sometimes more toxic and more frequently used than the chemicals used by non-organic farmers. By her definition ALL food would be poison, but as any scientist would tell you, it’s the dose that makes the poison. I mentioned that when we spray the herbicide glyphosate (Monsanto’s Roundup) on our fields it is at a rate of 22 ounces per acre, which is less than 2 soda cans over an area of land the size of a football field. We only spray two days out of an entire year. Simply said, the food conventional farmers grow is not scary. It’s thanks to biotechnology that we are using less chemicals than ever before and no longer having to spray insecticides, which HELPS beneficial insects like bees, and does not hurt them as she misleadingly claimed. Our farm holds the award for “Iowa farmers of the year” in soil and water conservation because, as a result of modern technology including the use of genetically modified seeds, we use no till, cover crops and crop rotation. Biotechnology is doing great things for farmers and allows us to grow more food on less land while using less water, fuel, and inputs.

Shiva gave me the stink eye but didn’t say a word while I was speaking, other than “thanks.”

I really didn’t know what to expect from the crowd, but surprisingly, I was applauded! After I left I was approached by a group of people who thanked me. They said “You did a great job. I applaud your bravery. We appreciate hearing multiple sides of a story. You are welcome here,” etc. It was great. I was also approached by a security guard who wanted me to be aware that he would be following me around a bit to ensure my safety in case anyone tried to cause trouble. He even walked me to my car so that was nice. Surprisingly, not a single hater. None.

I want to share this story to encourage you all to stand up for the truth. For farmers, agronomists, scientists, etc speaking up HAS to be a part of our job description nowadays. We are the experts, we are the ones that have the most education and firsthand expertise on the topic. Don’t let misinformed activists tell our stories and don’t be afraid to step out of your comfort zone. A situation that looks intimidating could be the best opportunity to educate. If we all do our part to advocate for science and agriculture, we CAN make a difference.

Michelle Miller, Farm Babe (@thefarmbabe), raises sheep and beef cattle while helping on her boyfriend’s 2,000-acre crop farm in Northeast Iowa. She is a passionate agvocate and believes it is important to bridge the gap between farmers and consumers. In addition to running her blog, www.facebook.com/IowaFarmBabe, she does freelance writing and public speaking.