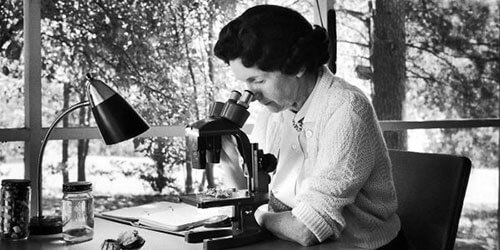 This article originally appeared at Forbes and has been republished here with the author’s permission.

Environmental activists gathered last month in Washington DC to celebrate the legacy of the late author Rachel Carson, who gained fame for her book, “Silent Spring.” They’d have done better to pick up trash at a local park.

Carson’s writings included many inflammatory and misleading claims about chemicals, claims that have long been rebuked by scientists. Yet her rhetoric spawned a radical environmental movement that promotes unwarranted bans and restrictions on pesticides that otherwise could be used to make food more affordable and fight mosquito-transmitted diseases such as malaria, the Zika virus, the West Nile virus, and more.

“Silent Spring,” which is widely credited with launching the modern environmental movement, was an emotionally charged but deeply flawed denunciation of the widespread spraying of chemical pesticides for the control of insects. It painted a dystopian picture of an environment so poisoned by chemicals that “no birds sing” and “one in four” people would die from cancers caused by exposure to chemicals.

The book is still revered by many (especially by those who haven’t actually read it), but its legacy is anything but positive.

As detailed by Roger Meiners and Andy Morriss in their scholarly yet very readable analysis, “Silent Spring at 50: Reflections on an Environmental Classic,” Carson exploited her reputation as a well-known nature writer to advocate and legitimatize “positions linked to a darker tradition in American environmental thinking.” Carson “encourages some of the most destructive strains within environmentalism: alarmism, technophobia, failure to consider the costs and benefits of alternatives, and the discounting of human well-being around the world.”

Carson’s proselytizing and advocacy raised substantial anxiety about DDT and led to bans in most of the world and to restrictions on other chemical pesticides. But the fears she raised were based on gross misrepresentations and scholarship so atrocious that, if Carson were an academic, she would be guilty of egregious academic misconduct. Her observations about DDT have been condemned by many scientists. In the words of Professor Robert H. White-Stevens, an agriculturist and biology professor at Rutgers University, “If man were to follow the teachings of Miss Carson, we would return to the Dark Ages, and the insects and diseases and vermin would once again inherit the earth.”

In 1992, San Jose State University entomologist J. Gordon Edwards, a long-time member of the Sierra Club and the Audubon Society and a fellow of the California Academy of Sciences, offered a persuasive and comprehensive rebuttal of “Silent Spring.” As he explained in “The Lies of Rachel Carson,” a stunning, point by point refutation, “it simply dawned on me that that Rachel Carson was not interested in the truth about [pesticides] and that I was being duped along with millions of other Americans.” He demolished Carson’s arguments and assertions, calling attention to critical omissions, faulty assumptions and outright fabrications.

Consider, for example, this passage from Edwards’ article:

This implication that DDT is horribly deadly is completely false. Human volunteers have ingested as much as 35 milligrams of it a day for nearly two years and suffered no adverse effects. Millions of people have lived with DDT intimately during the mosquito spray programs and nobody even got sick as a result. The National Academy of Sciences concluded in 1965 that ‘in a little more than two decades, DDT has prevented 500 million [human] deaths that would otherwise have been inevitable.’ The World Health Organization stated that DDT had ‘killed more insects and saved more people than any other substance.’

In addition, DDT was used with dramatic effect to shorten and prevent typhus epidemics during and after WWII when people were dusted with large amounts of it but suffered no ill effects, more persuasive evidence that the chemical is harmless to humans. The product was such a boon to public health that in 1948 the Nobel Prize in Physiology or Medicine was awarded to Dr. Paul Müller for his discovery of the “contact insecticidal action” of DDT.

Although the use of DDT is not risk-free, there is a vast difference between applying large amounts of it in the environment–as farmers sometimes did before it was banned in the United States–and using it carefully and sparingly to fight mosquitoes and other disease-carrying insects, as it is used in a handful of African and Asian countries even today. It is sprayed or dusted indoors in small amounts to prevent mosquitoes from nesting, so exposures are extremely low. The now well-known problems associated with the thinning of raptor’s eggshells–while always exaggerated–can be completely avoided by using DDT with care exclusively in residential areas, because the chemical remains largely near where it is sprayed. No study has ever linked DDT environmental exposure to harm to human health.

A basic principle of toxicology is that “the dose makes the poison” (in large amounts, licorice and nutmeg are toxic), and with modern regimens both environmental and human exposures would be very low. But “Silent Spring” condemned essentially all use of chemical insecticides and rejected the firmly established principle that products with known but small risks can offset far larger risks and provide a net safety benefit. Such tradeoffs are the essence of “comparative risk assessment,” the stock-in-trade of regulators worldwide.

Carson’s disingenuous proselytizing spurred public pressure to ban DDT in many countries, with disastrous consequences: a lack of effective control of mosquitoes that carry malaria and other diseases. Malaria imposes huge costs on individuals, families and governments, and it inflicts a crushing economic burden on malaria-endemic countries and impedes their economic growth. A study by the Harvard University Center for International Development estimated that a high incidence of malaria reduces economic growth by 1.3 percentage points each year. Compounded over the four decades since the first bans of DDT, that lost growth has made some of the world’s poorest countries an astonishing 40 percent poorer than had there been more effective mosquito control.

It is bad enough that the case against DDT was based on anecdote and innuendo, but Carson, her acolytes and the regulators who banned DDT failed to consider the inadequacy of alternatives. Because it persists after spraying, DDT works far better than many pesticides now in use, many of which are just as toxic to birds, mammals, fish and other aquatic organisms. And with DDT unavailable, many mosquito-control authorities are depleting their budgets by repeated spraying with expensive, short-acting and marginally effective insecticides. We’ve seen this most recently in southern Florida, where there has been massive and largely ineffectual spraying to control Aedes aegypti, the mosquitoes that transmit Zika virus (as well as the yellow fever, dengue fever and chikungunya viruses).

Another advantage of DDT is that even when mosquitoes become resistant to its killing effects, they are still repelled by it. Thus, an occasional dusting of window- and door-frames is extremely effective at keeping mosquitoes out of homes, schools, hospitals, and other buildings. When used in this way, the exploitation of DDT’s repellency also exposes people to lower amounts of insecticide than occurs with the only comparably effective alternative, bed nets soaked in various other pesticides. Moreover, limited DDT spraying does its work at a fraction of the cost.

The legacy of Rachel Carson is that tens of millions of human lives–mostly children in poor, tropical countries–have been sacrificed for the possibility of slightly improved fertility in raptors. This is one of the monumental human tragedies of the last century, recalling the observation of political scientist and risk analysis expert Aaron Wildavsky that although it is bad to be harmed, it is worse to be harmed in the name of health.