Enhancing humans: Becoming a cyborg could end up as a privilege of the wealthy

What is the greatest achievement of evolution? Here are some popular choices: the development of the genetic code in primitive microorganisms; the ability to thrive on oxygen (which previously had been toxic to most of Earth’s life forms); the emergence of eukaryotic cells; multicellular organisms; or, very recently, the development of the human brain, which more than tripped in size over the last 5 million years. But several future-minded thinkers believe that the biggest advances are yet to come.

For billions of years, all of the beneficial innovations of life on Earth came from changes in the genes, imparted to future generations by the sieve of natural selection and other evolutionary forces. In our ancestors, intelligence was a survival advantage, so the brain got bigger and soon we were using it to invent technologies, which improved life by altering the environment outside of the body.

Now, with our knowledge of biology at the cellular and molecular level growing by leaps and bounds, and with our computer and electronics technology exponentiating, great thinkers are considering the emergence of high scale artificial intelligence (AI) and what it could mean for humanity. Intelligent, sentient robots could be coming and people like Bill Gates and Elon Musk want to make sure that AI develops in a way that’s not harmful to humans. We want machines to replace us in certain functions–particularly dangerous tasks like pulling people out of fires–but with safeguards built in so that even when AI exceeds that of humans it won’t replace our species, or seek to enslave us.

As AI advances, machine technology is expected to merge with humans, as it has already begun to do. Today, it’s routine for people to have implanted drug infusion pumps, cardiac pacemakers, and other devices, and the day is coming when artificial organs–machine hearts, livers, and kidneys–will not only be available, but preferable to a donor organ. Along with that will come true, fully-functinal and cosmetically appealing bionic limbs, eyes, and ears, and brain implants and interfaces could be possible to give people a boost in memory capacity and even information. Imagine having the Internet connected directly to your brain.

I think it is likely in the next 200 years or so Homo sapiens will upgrade themselves into some idea of a divine being, either through biological manipulation or genetic engineering of by the creation of cyborgs, part organic part non-organic. It will be the greatest evolution in biology since the appearance of life. Nothing really has changed in four billion years biologically speaking. But we will be as different from today’s humans as chimps are now from us.

Regarding “nothing has really changed in four billion years biologically speaking”, on this point Harari is completely wrong. In the last four billion years, life emerged on Earth, learned how to thrive in oxygen instead of dying from it, and through biological evolution the cosmos learned to taste, smell, see, hear, and speak. In our corner of space, the cosmos started thinking about itself in the form of sentient human beings. Since human divergence with apes a few million years ago, brain size has more than tripled and independently of size the brain has become far more complex. Only a million years ago, though boasting brains 2/3 the size of ours, our ancestors still could not speak, because the spinal canal was too narrow for the needed control of breathing and other muscles. The changes enabling speech, writing, and a plethora of other physical and mental skills were anatomical. They developed as a result of Darwinian evolution, and so, “biologically speaking”, in four billion years, everything has changed.

Related article:  Marrying your cousin? There may be evolutionary benefits 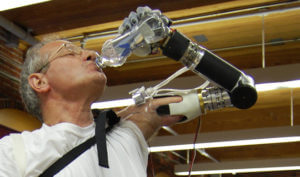 But Harari is right that we’re moving into an age of human enhancement, and he’s fairly hopeful that there will be positive consequences. In particular, he expects the cyborgazation of humans to end religion. That may be a tall order at Hebrew University, located in Jerusalem, where people still come from all over the planet to pray to a stone wall, but Harari is thinking in terms of centuries. In Western Europe, North America, and other developed countries, people are dropping organized religion. The new religion, Harari observes, is technology and a blind belief in the infinite power of innovation.

As long as humans believed they relied more and more on these gods they were controllable. But what we see in the last few centuries is humans becoming more powerful and they no longer need the crutches of the gods. Now we are saying we do not need God, just technology. The most interesting place in the world from a religious perspective is not the Middle East, it’s Silicon Valley where they are developing a techno-religion. They believe even death is just a technological problem to be solved.

The challenge is that the technology will cost money. Harari warns that the future–the bionic body parts and all the enhancements to prolong human life–could end up as a privilege of only the wealthiest segment of society.