Have patients been forgotten in the quest to build private BRCA variant databases?

Ricki Lewis | April 25, 2017
This article or excerpt is included in the GLP’s daily curated selection of ideologically diverse news, opinion and analysis of biotechnology innovation.

The news release grabbed my attention:

Myriad Genetics had been exclusively providing tests, for $3000+ a pop for full BRCA gene sequencing, for 17 years before the Supreme Court invalidated key gene patents back in 2013. Since the ruling a dozen or so competitors have been offering tests for much lower prices. Meanwhile, Myriad has amassed a far deeper database than anyone else, having been in the business so much longer. And it’s proprietary.

Public databases of variants of health-related genes have been around for years too. The best known, ClinVar, collects and curates data from the biomedical literature, expert panels, reports at meetings, testing laboratories, and individual researchers, without access to Myriad’s database. ClinVar uses several standard technical criteria to classify variants as “pathogenic,” “benign,” or “of uncertain significance.” (“Likely pathogenic” and “likely benign” were used more in the past.) 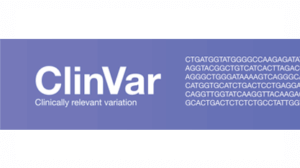 ClinVar lists 5,400 variants just for BRCA1. The criteria come from population statistics, how a particular mutation alters the encoded protein, effects on the phenotype (symptoms), and other information. Bioinformatics meets biochemistry to predict susceptibility. The BRCA1 protein acts as a hub of sorts where many other proteins that control DNA repair gather. DNA Science discussed the genes behind breast and ovarian cancers here.

As gene sequences accumulate in the databases and troops of geneticists and genetic counselors annotate them, the proportion of pathogenic and benign entries will increase as that of the unsettling “variants of uncertain significance” — VUS — will decrease. Knowing will outpace not knowing. In the meantime, a woman with a VUS for a gene that confers susceptibility to develop breast and/or ovarian cancer, concerned that her DNA sequence isn’t “normal,” might have her at-risk organs removed. And then she might learn, as the databases grow, that her variant is really benign after all, because while she was being treated for a disease that she didn’t actually have, more patients emerged who have the gene variant but not the related cancers.

The reclassification of a VUS as something more meaningful depends on access to as much information as possible.

How many unnecessary surgeries are happening? Have happened? Myriad estimates hundreds to thousands.

The news release announced a paper from Myriad just published in The Oncologist that compared 4,250 unique BRCA1 and BRCA2 gene variants in the company’s database to entries in ClinVar, and found that 26.7% of the ratings do not fully agree. (ClinVar lists multiple sources for many of the variants, and 14.5% didn’t agree on all counts and 12.3% on only some.) According to Myriad, most of the VUS listings were in ClinVar. In fact, only 0.5% of Myriad’s BRCA1 sequences and 1.1% of their BRCA2 sequences are VUS. They’re clearly ahead of the game.

The discordance isn’t really news. It echoes earlier reports both from Myriad researchers for the BRCA genes and from a  non-Myriad, multi-center group for several cancer susceptibility genes. And another recent study found that about half of women with VUS undergo bilateral mastectomy, concluding that “many surgeons managed patients with BRCA1/2 VUS the same as patients with BRCA1/2 pathogenic mutations.” That’s terrifying. It means that the problem isn’t due just to overanxious patients, but also to surgeons who might not be genetics-savvy.

The news release doesn’t go to the obvious conclusion, that privatization of the database may be fueling inappropriate surgeries, or at least not preventing them, a point that Sharon Begley made elegantly in Stat News. Many of her expert sources countered the implication that variant classifications from ClinVar are just accepted and delivered to patients without further and often intense research and validation by health care providers.

In the news release, William Gradishar, MD, from the Feinberg School of Medicine at Northwestern University and lead author on the new study from Myriad, provided the company view (slightly edited):

“The high degree of discordance seen in this study signals a cautionary note … it means that different labs are providing different results to patients for the same genetic mutation … some patients are receiving incorrect results that may have life-changing or -threatening implications… Although efforts are underway to resolve the quality problems within public databases, it is unlikely the issue will be resolved soon and users of public databases likely will continue to encounter discrepancies. At this time, labs should not use public databases in any way in clinical variant classification.”

Ron Rogers, spokesperson for Myriad, wrote in an email that the company provides database access for certain scientific collaborations, but then provided the business view:

“Myriad has invested hundreds of millions of dollars to develop our database over two decades, which is used to classify variants as part of the Company’s specific process. We encourage other commercial labs to make their own investments, which are required to offer a quality product. The problem is that some other commercial labs refuse to make the needed investments. Instead, they are trying to short cut the process by relying on inaccurate public databases, which has the potential to deliver inaccurate results and harm real people.”

If anyone remembers the race to sequence the first human genome, which pitted NHGRI and their public database against Celera Genomics and their proprietary one, the battle over BRCA is a little deja vu all over again.

Rogers added that if patients who have had bilateral mastectomies following a report of a VUS had come to Myriad, “we could have provided many of them with definitive answers and helped to prevent a significant number of these life-changing procedures.” About 85% of the BRCA testing market indeed uses Myriad’s products.

Myriad’s tests as well as their support (genetic counseling) are excellent. The company helped a friend of mine interpret and confirm BRCA1 test results from 23andMe, which her son had taken on a whim but the unexpected finding of a mutation had sent her family into a tailspin. 23andMe, the direct-to-consumer genetic information company, coaxes customers to provide their results for research (“Be part of something bigger”) and charges investigators for access to the data. Like Myriad, 23andMe also suffered a setback in 2013. FDA yanked some of their health-related carrier tests, but the agency reversed the ban on April 6, 2017. 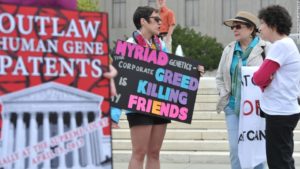 23andMe and Myriad serve different types of individuals. Many of 23andMe’s customers, like my friend’s son, aren’t distraught over cancer, just curious and acting on their own. So here’s another comparison: Is Myriad’s protecting of their data similar to my reaction to people downloading my books for free? No. I’m just losing royalties.

My mother’s lost battle with breast cancer can’t help but influence my view that impeding accurate diagnosis for profit, to protect assets, may make sense in the business world but is not the right thing to do. I have trouble commoditizing patient tests and sequestering information that might help, and the many rock stars of genetics who have joined the Free the Data movement would agree.

Because the entire discussion makes me queasy, I thought instead I’d illustrate the distinction between a harmful mutation and a VUS, by comparing the BRCA1 gene sequence to the English language.

Most genes are thousands of DNA bases long, and therefore can vary in many ways. Gene variants – mutations – can affect health or not depending upon how they disrupt the proteins that they encode.

BRCA1 (the gene) is 125,951 bases long, only 5,589 of which are represented in the protein. Mutations near its ends are more damaging than those in the middle. One of the two Ashkenazi (Jewish) “founder” mutations, 185delAG, removes an A and a G at position 185, near the beginning. Because a gene sequence is read in triplets – every 3 DNA bases encodes an amino acid – adding or deleting a number that isn’t 3 or a multiple of it devastates the protein’s function. 185delAG is, then, a gene variant of very high significance. (My analogy below is not quite on target because the words in a sentence vary in length.)

I entered 125,951 letters into a publishing calculator that translates numbers of alphabet characters into a book of a particular size, and wound up with a 6” by 9” volume of 265 pages. That view of the BRCA1 gene’s enormity corresponds to approximately the length of Margaret Atwood’s dystopian masterpiece “The Handmaid’s Tale.” I’m rereading it, inspired by the “Make Margaret Atwood Fiction Again” signs at the March on Washington January 21.

I took a sentence about as far into the book as the 185delAG mutation is in the BRCA1 gene:

Everything except the wings around my face is red: the color of blood, which defines us.

Removing two adjacent letters – the “ex” in “except” – and then moving the other letters into the word-sizes, clearly disrupts the meaning:

A VUS would do something less drastic, such as replacing a letter in a way that doesn’t obscure the overall meaning of the sentence (or gene). Substituting the “g” in “everything” with a “j,” for example, doesn’t alter the meaning. And many changes to a DNA sequence have no effect on the encoded amino acid sequence at all.

So that’s what a VUS is, a DNA sequence of a particular gene of interest that’s rather rare in a population, and that may or may not mean something. And their numbers will decline and then vanish as the databases build and their entries are annotated and validated. But until they do, I think that sharing all that we know about variants of possibly disease-causing genes, to prevent unnecessary treatments, is the only ethical path to take.

This article originally appeared on the PLOS DNA Science blog under the title Dueling BRCA Databases: What About the Patient? and has been republished with permission from the author.