Lance Armstrong destroyed his competition at the Tour De France from 1999 to 2005–winning cycling’s most famous cycling event a record seven times. During his epic run, the world looked on in disbelief. How did he do this? Today, we know the answer—he was cheating.

Armstrong was doping his blood with erythropoietin (EPO), a hormone normally produced by the liver and kidneys to control red blood cell production. Doping at the Tour de France is as old as the event.

But elite athletes in virtually every sport have tried to gain an edge–from drinking alcohol to injecting human growth hormone (HGH).

Well, according to one scientist–there’s one thing they haven’t tried yet: Doping their poop with ‘special’ bacteria to create a superior microbiome.

While it may sound outlandish that tiny single-celled critters could boost performance better than or (at least as much as) powerful and proven performance enhancing drugs like HGH and EPO, Lauren Petersen, a research scientist at the Jackson Laboratory for Genomic Medicine and a cyclist herself, claims exactly this. And it’s garnered a lot of attention in the science, sports and mainstream media.

Bicycling: Is poop doping the next big thing?

Deadspin: The Next Big Thing In Cycling Could Be Poop Doping

Do Petersen and her claim deserve this much attention? Is there any validity to poop doping? A closer inspection of the claim and the person reveal that ‘poop doping’ is as its name suggests: crap.

The crux of Peterson’s claim is that according to her research, elite athletes all share some commonalities in their gut microbiomes—the bacteria that normally inhabit the intestinal track of humans. The Scientist article, which was the first published on the issue, described how she came to this conclusion:

Petersen quickly rounded up 35 of her cyclist friends to participate in the project, aptly dubbed the Athlete Microbiome Project. She had each submit stool samples, from which she sequenced the 16S RNA to identify the species that made up each person’s gut microbiome and examined the mRNAs present to get a sense of how the individuals’ microbiomes might be functioning differently.

The results, she told Bicycling, showed that “…only half of cyclists have Prevotella, but top racers always have it. It’s not even in 10 percent of non-athletes.” It’s a type of bacteria not commonly found in the guts of Europeans or Americans; Petersen says it plays a role in muscle recovery.

The Scientist also claimed that her data showed that “athletes had more diverse microbiomes than healthy nonathletes…The cyclists also had a higher abundance and activity of Methanobrevibacter archaea, which consume by-products of bacterial fermentation of complex carbohydrates.”

The article also noted that there has been other research focused on the subject of athlete’s microbiomes. A study of professional rugby players in Ireland published in the journal Gut also concluded that athletes had similar and more diverse gut microbiomes than non-athletes—but reported nothing about Prevotella. 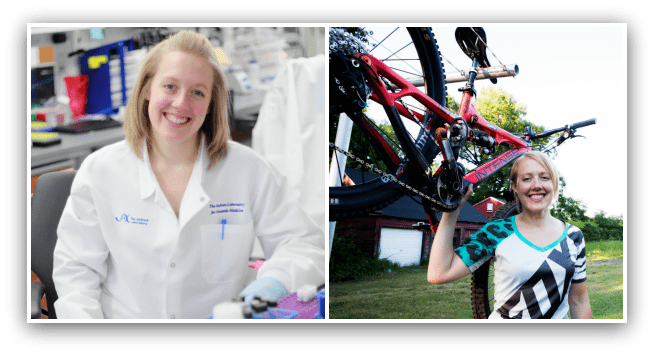 All of this makes fascinating reading. As for the science? In examining Petersen’s science, there is a lot to be desired. The most glaring weakness is the sample of people she chose to examine.

Most scientists would look at her sample size of 35 and right off tell you this is a major problem. It’s too small to rule out the possibility of errors in sampling collection or analysis. When a sample size is so minuscule, mistakes become magnified and non-existent relationships can appear.

But there’s another issue here and it has to do with who she chose to study: her friends. These people likely interacted socially, practiced together, ate similar diets and competed against each other. They also likely all lived in the same geographic region. All of these lifestyle factors could drive similarities in the microbiome. The same could factors were likely in play in the rugby study.

We just can’t tell, based on the available data, if the similarities in microbiome composition were from shared lifestyle factors and close proximity to each other or something else. And even if the results are valid–that Prevotela is unique to elite athletes–it’s a huge leap to the conclusion that it boosts or contributes to performance. Not even the rugby study’s author believed there was a cause and effect relationship established by these data, telling The Scientist, “it’s all associations. We haven’t figured out the cause.”

Many holes in Lauren Petersen’s story

Lauren Petersen, who studied pathogenic bacteria at the University of New Hampshire, is also part of the story. According to Petersen, her interest in this subject began with her inability to fully escape an affliction called Chronic Lyme Disease.

“I’d feel like crap for a month or two, and then the antibiotics would make me feel like crap, and then I’d rebound a little bit and be okay for a while,” she told The Scientist. “It was continuous peaks and valleys.” For years she was on and off powerful antibiotics.

While working on her Ph.D., she came to the conclusion that her microbiome might be the cause of her health problems. An analysis of her gut microbiome, she said, revealed she had mostly Gram-negative bacteria. She told Bicycling: “I had no microbes to help me break down food, and I had picked up bugs in the lab where I was working because my system was so weak and susceptible.”

After this discovery, she underwent a fecal transplant, an experimental and controversial technique that attempts to transfer the stool from a healthy donor into the gastrointestinal tract of someone afflicted with colitis generally caused by a nasty bug called Clostridium difficile (more commonly known as C-Diff.) She said the procedure worked and in an instant, she was healed. The donor was an elite athlete which she said led her down the path to the study described above.

From a science standpoint, there’s a lot to unpack here.

First, there is no such thing as Chronic Lyme Disease. No respectable scientists or clinician recognizes this condition. It is a condition used by pseudoscientists to sell quack treatments—many of which are dangerous.

“Clinicians, public health practitioners, and patients should be aware that treatments for Chronic Lyme Disease lack proof of effectiveness and can result in serious complications,” said Natalie Marzec, MD at the University of Colorado in Aurora.

Second, there is no such thing as a ‘healthy microbiome’ as she believes. Most data suggest that diversity in species type is linked to better health, but most experts agree the search for a healthy microbiome is fruitless.

One thing we do know: The human’s gut microbiome is supposed to include by Gram-negative bacteria (so named for the shape of their cell wall). Gram-negative bacteria such as Escherichia coli are critical in our gut for breaking down food and producing important metabolites like vitamin K. All bacteria are about location and context—in the right place gram negatives are vital for digestion and health. Plus, her precious Prevotella is a Gram-negative that is known to cause human health ills.

It’s also important to point out, Petersen hasn’t published any of her ideas or data. A Pub Med search revealed just four publications. None on the gut microbiome. None on athletes, elite or otherwise. None in three years. Publications matter. The watchful eye of the scientific community, via peer review, is vital for filtering out bad ideas. It doesn’t matter that she’s submitted this data for publication.

None of this matters to Petersen. Her data is conclusive to her, she told Bicycling:

What we’re learning is going to change a lot for cyclists as well as the rest of the population. If you get tested and you’re missing something, maybe in three years you’ll be able to get it through a pill instead of a fecal transplant. We’ve got data that no one has ever seen before, and we’re learning a lot. And I think I can say with confidence that bacterial doping . . . is coming soon.

Unless Petersen has a crystal ball, as a scientist she should know better than to speculate so outrageously without published, peer reviewed data.

But the media should know better too. Not one of those articles pointed out her scientific misrepresentations, such as the Chronic Lyme Disease diagnosis. In the age of fact checking and fake news, the media need to remember to apply these high standards to more than just the president.

This story should never have been covered, particularly by a major publication such as the Washington Post and several other outlets, including the Denver Post and Chicago Tribune, that reran the story. The message this story pushes on its readers is irresponsible: Don’t worry about eating right or staying active. Don’t worry about genetic or metabolic tests, doctor’s appointments or medications. Get your gut bacteria right and you’ll be better than fine–you can be be an elite athlete!

It’s a bold and outlandish claim without a published study to back it up. It’s little more than an anecdote. It’s certainly not science. It’s crap. Literally.