Ricki Lewis | October 2, 2017
This article or excerpt is included in the GLP’s daily curated selection of ideologically diverse news, opinion and analysis of biotechnology innovation.

Certain things have a natural order. Breakfast before lunch. Infancy before adolescence. Autumn before winter.

So I was surprised to read a recent t article in Science Translational Medicine about experiments at Duke University treating cancer in human cells and in mice with an engineered poliovirus, when the television news show 60 Minutes had reported on four patients receiving the treatment for brain tumors back in 2015. Doesn’t preclinical work – cells and animal models – come first?

I decided to investigate.

The idea to redirect an immune response against a pathogen to fight cancer goes back to the late nineteenth century, when Manhattan physician William Coley became intrigued by a man’s neck tumor that melted away after he contracted a nasty Streptococcus skin infection. After he found a few more cases, Dr. Coley began to experiment by rubbing bacteria-oozing goop into skin breaks in a few cancer patients. Every so often, tumors shrank. The approach, ignored for many decades, became known as “Coley’s toxins.”

The immune system attacks other pathogens including viruses, as well as cancer cells and transplanted cells, with two lines of defense—an immediate “innate” response that’s general, and a more specific, slower “adaptive” response.

First, a pathogen encounters “sentinel” (aka “antigen-presenting”) cells, the macrophages and dendritic cells. They’re festooned with proteins, called Toll-like receptors, which bind like Velcro to molecules on broad classes of pathogens. The binding sends out cascades of biochemical signals that launch the innate immune response: cells pour out anti-viral biochemicals (complement, collectins, and interferons) and trigger the adaptive response, causing T cells to secrete more interferons and activate B cells, which produce antibodies. (Bear with me, this is important.)

Nervous tissue consists of nerve cells (neurons) as well as the much more abundant glia. Immunotherapy against brain cancer targets the glia, specifically the star-shaped astrocytes. Once thought to merely fill spaces and support neurons, a little like the view of housewives in the 1950s, glia are actually a vital part of the signaling that keeps the nervous system going.

Neurons normally don’t divide and so their DNA doesn’t have the opportunity to mutate into cancer. But glia do proliferate. And cancerous glia – gliomas – divide explosively.

Matthias Gromeier, MD, had the idea to use poliovirus to combat recurrent glioma in the mid 1990s, while at Stony Brook. He described what’s now called PVSRIPO in a paper in 2000. It stands for Polio Virus Sabin-Rhinovirus Poliovirus.

PVSRIPO, a retooled Sabin live poliovirus vaccine, can’t enter neurons and has a bit of human (cold-causing) rhinovirus. In those early experiments, it vanquished induced brain tumors in mice and entered glioma cells growing in culture from patients undergoing surgery. 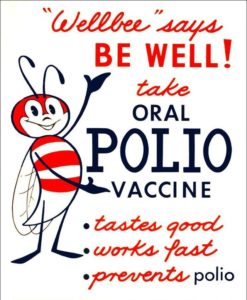 Wild poliovirus infects motor neurons in the brainstem and spinal cord of primates only, causing “flaccid paralysis” in 1-2 percent of people. (See Vaccine Memories: From Polio to Autism). The virus also infects glia, by latching onto a protein, CD155, on their surfaces. Glioma cells are especially dense with CD155. Normally, when CD155 isn’t serving as a poliovirus receptor, it links lining (epithelial) cells into sheets. Perhaps poliovirus originated as a borrowed bit of a human genome that encodes a protein that fits, like a puzzle piece, into CD155.

The modified poliovirus doesn’t cause polio, but is a vaccine. It unleashes an army of white blood cells that attack or attract the immune defense to the cancer – neutrophils, dendritic cells, and T cells.

The worst of the worst, glioblastoma multiforme originates in astrocytes. Eric Holland, MD, PhD, at the Fred Hutchinson Cancer Research Center, called it “the terminator” in an editorial accompanying Dr. Gromeier’s 2000 report.

“Multiforme” refers to the myriad ways that this tumor takes over a human brain. It produces areas of decay or bleeding, while microscopically unfurling tiny tentacles everywhere, perhaps recapitulating the fast growth of an embryo’s brain. Surgery can “debulk” the tumor, and radiation and the oral chemo drug temozolomide can help, but almost always some tentacles persist. Tumor cells’ genomes are riddled with mutations. Changed, extra, and missing DNA bases sabotage the signaling that regulates the cell division cycle.

In 2000, Dr. Gromeier and colleagues hypothesized that their viral invention could coax an immune response against glioma cells. They thought it would do so by bursting, or lysing, the cells. And so was born the “oncolytic poliovirus for human tumors” that finally received a patent on August 3, 2017. I’ll call it OncPo because I can’t remember PVSRIPO. It would turn out to do much more than the investigators imagined in 2000.

The journey from compelling idea to animal/cell experiments to clinical trial typically takes a decade or longer, and OncPo’s saga is no exception.

The phase 1 clinical trial that Scott Pelley reported on for 60 Minutes in 2015 and updated a year later was filed at ClinicalTrials.gov in late 2011, and the first patient treated on May 11, 2012. The trial was to enroll 61 patients, and the TV show followed four of them. All had grade IV malignant glioma (very bad), and received the viruses through catheters snaked into their tumors under MRI guidance.

The team formed Istari Oncology to sponsor the trial. Now in phase 2, it has added the chemo drug lomustine, which helped earlier patients. A separate clinical trial will test safety and preliminary efficacy in kids, in whom gliomas are rare.

Results were so promising that in May 2016, FDA assigned OncPo “breakthrough therapy” status, which presumably speeds evaluation. A “natural history” study reported in that month’s Journal of Clinical Oncology provided the data backing the designation. It found that median survival for 15 treated patients was 12.6 months compared to 10.5 months for 124 untreated “historical controls.” By 24 months, 23.3% of the treated patients were alive compared to 13.7% of the controls. Higher doses, the investigators suggested, should improve efficacy even more.

60 Minutes updated their story with the breakthrough status. But let’s rewind the tape.

The TV show followed the clinical trial at Duke for 10 months. The first episode that catalyzed nearly everyone I know to immediately alert me sent my hype detector into overdrive:

“In just a moment, polio will be dripped into the brain of 58-year-old Nancy Justice. Her glioblastoma tumor was discovered in 2012. Surgery, chemotherapy and radiation bought her two and a half years. But the tumor came roaring back. Now, the virus in this syringe, which mankind has fought to eradicate from the earth, is the last chance she has in the world.”

Duke’s Chief of Neurosurgery Dr. John Sampson, used 3D MRIs to guide the delivery of the viruses into Nancy’s brain as she smiled and chatted away.

Pelley credited Dr. Gromeier, calling the idea his “obsession,” and then with a winning entry into the annals of science oversimplification asked the good doctor, “When you went to your colleagues and said, ‘I’ve got it. We’ll use the polio virus to kill cancer,’ what did they say?”

“We thought the polio virus might help her. We had no idea what it would do in the long haul. It was a crapshoot. It’s roll the dice and hope that you’re gonna get an answer that is coming up sevens and not coming up snake eyes.”

Try putting that into a submission to the FDA.

Pelley went on to call OncPo “a Frankenstein virus” that “releases toxins that poison the cell.” I’d hardly call the body’s own unleashed interferon a toxin, so perhaps Pelley had heard of Coley’s toxins after all. He then went on to confuse FDA approval of testing the virus with approval of the treatment – a sure recipe for fueling false hope.

Still, despite the hyperbole, OncPo is a success in the world of new cancer treatments, which can mean just a few months of disease-free survival. But the experimental protocol is far too sensitive and complex to be premature primetime fodder, IMHO. Indeed, after those first few patients did well on a low dose, it was upped. But the higher dose caused extreme inflammation in one patient’s brain, paralyzing and then killing her.

All told, out of 21 patients treated in the phase 1 trial, 8 had died by May 2016 – but survival had increased by 6 months. That’s certainly something.

One success is Stephanie Lipscomb, a young nursing student when treated in 2012. According to Facebook she appears to be alive and well, a nurse now and a mother. News reports of course called her “cancer-free,” but that’s a term, as a geneticist who has had cancer, that I never use, because nevertheless, micrometastases persist. Nancy Justice, the first patient profiled who smiled as OncPo dripped into her brain, died April 6, 2016, from a recurrence. The cancer can return from the few glioma cells that don’t bear the poliovirus receptor.

Revelations in the recent paper

Four patients do not a breakthrough make. Meanwhile, Dr. Gromeier, with co-senior author Smita Nair, PhD, an immunologist at Duke, and others, continued to pursue precisely how OncPo highlights glioma cells to the immune system.

The new experiments track the effect on human cancer cell types growing in culture. OncPo bursts the cells, as expected, but they leave behind a clue: double-stranded RNA molecules. The RNAs come from an intermediate stage of the virus that binds to the Toll-like receptors, and that indicates an unexpected activation of the innate immune response, which unleashes inflammation.

Remember the bit of rhinovirus stitched into OncPo? It may get the ball rolling, activating dendritic cells, which release interferon and activate the T cells that zero in on the antigens that dot the tumor cell surfaces, as neutrophils rush to the scene. That’s how it happens. The new study also engineered mice that make human CD155, and those mice had an innate immune response to infection with OncPo too.

The overall result: the immune system “sees” the cancer cells.

What the new slew of experiments reveals is that poliovirus doesn’t just burst cancer cells, it also elicits a broader immune response. And that may suggest new ways to treat glioblastoma and other cancers.

“Knowing the steps to generate an immune response will enable us to rationally decide whether and what other therapies make sense in combination with poliovirus to improve patient survival,” summed up Dr. Gromeier. Added Dr. Nair, “Not only is poliovirus killing tumor cells, it is also infecting the antigen-presenting cells, which allows them to function in such a way that they can now raise a T-cell response that can recognize and infiltrate a tumor.”

But a powerful broader lesson emerges: a linear scientific method that leads to a conclusion (or treatment) isn’t the way research works. As I’ve written in dozens of textbook editions, science is a cycle of inquiry. Questioning and learning never cease, even for something as accepted as climate change or how vaccines work. And it’s why continued preclinical experiments are informing the next round of clinical trials to evaluate the promising, if century-old, idea to detour an immune response to infection to fight cancer.

This story originally appeared on the PLOS website under the headline Poliovirus To Treat Brain Cancer: A Curious Chronology and has been republished here with permission.