Can’t get motivated? You may be able to blame your genes

Much has been written about apathy. Throughout history, there were many (often derogatory) phrases about apathy -‘Idle hands are the devil’s playground.’ In trying to think of why societies would have framed apathy in this way, it makes rational sense that natural selection would tend to favor those individuals who thrived in a collective, had a high level of energy, and verve in engaging in prosocial activities such as: Hunting, gathering, building, teaching, cleaning, cooking, etc. Those who were perceived as not pulling their weight would tend to rob the community of a clear sense of fairness in terms of duties and roles.

What makes humanity so interesting is that everyone has their own background, skills, perspectives, and personalities — and even given this absolutely enormous complexity, we are able to self-arrange into social groups, communities, societies, and nations. Of course, the flip-side of the human condition is that we tend to notice behaviors, to judge people, and to not always give others the benefit of the doubt that we would like.

With respect to apathy, when we see someone acting in an apathetic way, we may get frustrated and wonder why he or she doesn’t ‘care’ more or isn’t willing to work harder. And alternatively, that individual probably looks outward and wonders why certain people put added stress onto behaviors and decision-making. Even extending so far as to be involved in the presidential campaigning, apathy in the voting booth has been blamed on genetics. For this assumption, speculators looked at voting behaviors of twins and found that genes accounted for about half of voting activity.

Apathy typically is thought of as a lack of initiative, and repressed interest or enthusiasm — commonly-cited hallmarks. Several synonyms and a definition are here. Scientists at the University of Oxford and University College London, UK, conducted research on 37 individuals, among whom 16 were considered as behaviorally-apathetic based on the Lille Apathy Rating Scale (LARS-e), as well as the Depression, Anxiety, Stress Scales and the Snaith-Hamilton Pleasure Scale. As the study participants engaged in the research tasks, they were observed with functional magnetic resonance imaging (fMRI) on the orbital and ventral frontal regions of the brain. 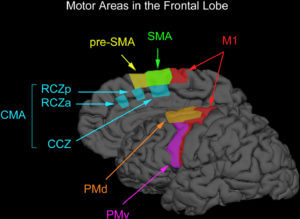 The fMRI results showed that the more apathetic participants showed increased activity in the supplementary motor area (SMA) and cingulate motor zones (see green and cyan sections in the image to the left). Every cell and structure in our body is designed by our individual genetic codes, and functions as specified by how our genes — individually and in synchronicity — code for activity. These brain regions identified in this particular research are involved in the anticipation of action. There was also a relationship seen between reduced connectivity between the SMA and the anterior cingulate cortex and heightened apathy levels. The premise is that apathetic individuals with this reduced structural connectivity would need greater physiological input to overcome what I call ‘apathetic inertia’ to then initiate an action. The researchers in the study called this ‘effort sensitivity,’ and it was correlated with behavioral apathy.

Some of this research is potentially directly applicable to neurological damage associated with stroke, and also neurodegenerative conditions including Parkinson’s disease and Alzheimer’s, which can present with apathy as a symptom. Interestingly, if we look at a motor disorder such as Parkinson’s disease (which fundamentally involves the dopaminergic system), apathy is a major non-motor symptom of the disease. Destruction in the dopamine-producing cells of the brain leads to movement disorders, including requiring more effort to initiate movement. But dopamine is also associated with motivation and pursuit of goals. The study’s authors noted:

Paradoxically, increased recruitment of neural resources at the response preparation level was also observed in more apathetic people… [in brain regions] known to be involved in anticipation of effort production and action preparation.”

This was done in neurologically-healthy people, and the authors concluded, “Thus, differences in motivation to act in healthy people might be due to differences in the brain’s premotor control network.” Interestingly, a somewhat similar finding came from Shimane University in Japan, where researchers concluded that a single nucleotide polymorphism of a dopamine-producing gene accounted for apathy.

Though this is an incredibly interesting preliminary result, caution is needed to not over-attribute the actions or motivations of people to one factor. There may in fact be an association in the identified brain regions, but the decision and motivation to act has behind it an infinity of motives, and is circumstance-dependent — so the overwhelming effect in differences of motivation observed in people is probably mostly sociological in nature, with a small differentiating factor contributed by biology.