Can exposure to air pollution before birth raise the risk for heart disease and even shorten life? Clues in chromosome tips suggest yes, according to a report published online in JAMA Pediatrics.

The findings are relevant not only for common sources of pollution, but also for natural disaster conditions, such as the recent wildfires in California. And they provide another reason to maintain the Clean Air Act.

Telomeres are the thousands of tiny repeats of the DNA sequence TTAGGG that cap our chromosomes. They whittle away, 50 to 200 bases at a time, whenever a cell divides, winding down to a point at which the cell never divides again. Some types of cells that replenish tissue, like skin cells and blood cells, might divide up to 50 or 60 times, but some others divide rarely, or not at all.

The rate of telomere shortening has been dubbed a “clock” that ticks down a cell’s remaining divisions, although a cell can stay alive a long time without dividing. Neurons never do. It’s been known for years that the clock is sensitive to all sorts of stimuli and stress that can rev up the division rate – smoking, excess abdominal girth, alcohol consumption, elevated blood sugar, and exposure to lead, pesticides, and nitrosamines.

A more recent study found a significant association between exposure to violent crime and domestic violence and telomere shortening among black kids living in or near New Orleans. Accelerated shortening corresponded to experiencing more such events.

Whatever the trigger, stress damages cells, through release of “reactive oxygen species” (ROS). These are compounds that are unstable because they include oxygen atoms that have unpaired electrons. ROS ricochet off DNA, RNA, and proteins, destroying delicate cell parts. 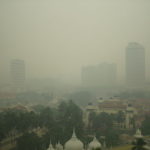 Air pollution is a known telomere-stunter, but until now the connection has only been scrutinized in adults. One study tracked accelerated telomere shortening over a year of exposure to black carbon (soot from fossil fuels) among male war veterans in Boston, and another found it with long-term exposure to traffic pollution in Milan.

The danger from fossil fuel spew is the “fine particulates,” which are under 2.5 microns in diameter and about half the size of a bacterium. They’re too tiny to be sneezed or coughed out. Instead, they lodge in the airways or lungs and may even make it into the bloodstream if they’re under 0.1 microns, like components of secondhand cigarette smoke. The wildfires in California released fine particulates of 0.4 to 0.7 micrometers.

The fact that telomeres are half guanine (GGG) makes them especially vulnerable to ROS, making chromosome tips like damaged shoelace tips.

Prenatal peeks at response to stress

In the recently reported experiment, Tim Nawrot, PhD, of the Centre for Environmental Sciences at Hasselt University in Belgium and colleagues measured chromosome tips in white blood cells from umbilical cord blood and for placental blood for 641 mother-newborn pairs. The cord blood reflected weeks 12 to 25 of pregnancy and the placental blood cells weeks 15 through 27. The researchers derived exposure to pollution based on the addresses of the women and known sources of fine particulates.

Results were striking. Telomere shrinkage was significantly accelerated during the second trimester of pregnancy – by 8.8 percent for cord blood and by 13.2 percent for the slightly later placental blood. After that the process seems to level out.

A specific time in gestation when vulnerability peaks for a type of environmental exposure is how prenatal development works––certain times are “critical periods” for certain responses. The drug thalidomide, for example, stunts fetal limbs if the pregnant woman takes it between 20 and 36 days from conception.

Sensitivity to air pollution during the second trimester also makes sense – that’s when the placenta thins as the circulation systems between pregnant woman and fetus bloom and knit closer together.

A window into future health?

Why might accelerated telomere shrinkage before birth matter? Possibly because cells divide most frequently during fetal development, as the rudimentary structures laid down in the embryo grow. Studies on other animals, like zebra finches, indicate that telomere length early in life can predict life span, although such a lab-based study with highly controlled environmental conditions can only approximate a lifetime of human exposures.

The bottom line: Exposure to ROS in pollution may set the stage for increased risk of cardiovascular disease. Those born with shorter telomeres “may be at a higher risk for cardiovascular disease and a shorter life span,” wrote Pam Factor-Litvak, PhD, , Ezra Susser, MD, DrPH, from Columbia University, and Abraham Aviv, MD from New Jersey Medical School in an editorial accompanying the new report. They also point out that extra-long telomeres increase cancer risk, so that perhaps the normal range of lengths is an evolutionary trade-off. That is, optimally telomeres would be long enough to protect against ROS causing cardiovascular disease, yet not so long that cells spiral into the uncontrolled cell division of cancer.

Practically speaking, the new link between prenatal air pollution exposure and hastened telomere shortening smack in the middle of gestation may be a warning to protect pregnant women from exposure to fine particulates.

The second trimester critical period for sensitivity to fine particulates in air pollution gives pregnant women a heads-up. Right after the pregnancy is confirmed, women can alter transportation to avoid construction sites and spewing chimneys and minimize exposure to traffic emissions. They can avoid, boot out, or yell at smokers. They might even wear the N95 or N100 cloth facial masks advised for people exposed to the wildfire smoke in California.

The link between pregnant women’s exposure to air pollution and damaging the health of the next generation is a compelling, science-based reason to maintain clean air regulations – with emphasis on “reason.”