Male pregnancy may be closer than you think

If you could have one science fiction idea come to fruition in the next five to 10 years, would male pregnancy be on the list? The 1994 film Junior starring Arnold Schwartezenegger certainly imagined the possibility. It might not be as appealing as warp drive, long-duration suspended animation, or uploading a human mind into an immortal android body, but based on current trends male pregnancy is likely to happen far sooner than any of those. So get ready; the terms “mother” and “father” may take on new usage in the years to come.

How can a man give birth?

In Junior, Schwartznegger’s character is a scientist who made himself the subject of a medical experiment aimed at achieving pregnancy by way of hormone therapy. Since as a man he lacked a uterus, an embryo was implanted onto the wall of the peritoneal cavity, the area inside the abdomen that contains internal organs. Because of the hormone therapy, the embryo developed the way an embryo would in any unintentional extrauterine (outside the uterus) pregnancy in a female. Whenever that happens in a woman, the pregnancy must be terminated, because it is extremely dangerous. In the film, it was intentional and therefore allowed to continue until the fetus was delivered surgically. But it was dangerous nevertheless, and would be dangerous in real life were anyone to implant an embryo into a man or women’s peritoneal cavity. 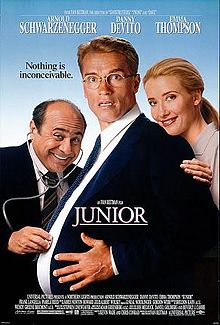 In real-life, however, that’s not exactly how it could be done. Instead, the man would be given a uterus of his own. Or her own, since the first uterine transplants to enable “male” pregnancy will most likely be performed on transgender people. Currently, gender-change therapy (culminating in gender reassignment surgery) can provide a man with a body that looks and feels female, with lactating breasts, even a “neoclitorus” reconstructed from penile tissue and enabling orgasm.

Transgender women cannot yet have babies, but transplanting a functional womb is not impossible, explained Karine Chung M.D., who directs fertility preservation program at the Keck School of Medicine at the University of Southern California. “It’s doable, it just hasn’t been done…My guess is five, 10 years away, maybe sooner.”

The logical progression before one transplants a uterus into a man, or a former man, is to transplant one into a woman. That step has been achieved at the Cleveland Clinic in women who were infertile — either because they were born without a uterus, or because their uteri had been resected, due to disease or malformation. In such cases, the transplant is challenging, because on top of the surgery any organ transplant requires medical therapy to prevent a patient’s immune system from rejecting the organ.

Even so, unlike with a male patient, a female patient has the needed blood supply for a uterus present. A female recipient who had her natural uterus resected still has the uterine artery and veins that can be connected to the donated organ to give it a blood supply. Often even a female born without a uterus has these needed vessels, plus there are other anatomic factors. The uterus needs to be supported with pelvic ligaments, plus attachments to the vagina that are not present in transgender women. For all of these reasons, a naturally-born female is a more biologically compatible recipient for a donated womb than someone who was born male, even if no-longer male externally. Logically, therefore, uterine transplantation should be performed first on women and that’s exactlywhere medical science is right now.

That said, there’s no technological or medical reason why a man could not receive a donated uterus. While there are no uterine vessels or pelvic ligaments to connect, such structures could be created. Vessels taken from elsewhere within a man could be utilized to form connections with the internal iliac artery and vein to give the organ a blood supply. Various connective tissue structures can be utilized to create the pelvic ligaments that support the uterus in women.

Who would want the procedure?

As for who will be the first candidates after the infertile women who already are benefiting from this experimental procedure, we could imagine a man opting to do it in the name of science, similar to Schwartezenegger’s character. On the other hand, it seems logical that transgender women will constitute a bigger market.

“I’d bet just about every transgender person who is female will want to do it, if it were covered by insurance,” said Christine McGinn M.D., a plastic surgeon on New Hope, Pennsylvania who is consulting on a film about the early days of sex reassignment surgery. “Human drive to be a mother for a woman is a very serious thing,” she said. “Transgender women are no different.”

Whether insurance companies will actually pay is a big IF, however. Plus, on the horizon is another sci-fi sounding development that also can become technologically feasible: the artificial womb. Known as ectogenesis, the idea is to let an embryo develop in a machine, totally outside the body, all the way to term. Physically, at least, plenty of people, potential mothers and fathers alike may find it more comfortable and may prefer it. Ectogenesis may not provide the experience of carrying the fetus within you, but for early technology adopters, at least, the artificial womb may give womb transplantation a run for the money.