Viewpoint: UC-San Francisco is the ‘academic home of the anti-GMO movement’

Alex Berezow | September 20, 2018
This article or excerpt is included in the GLP’s daily curated selection of ideologically diverse news, opinion and analysis of biotechnology innovation.

Being anti-GMO is the biotech equivalent of being anti-vaccine.

The scientific literature overwhelmingly and definitively has concluded that GMOs are safe. Vaccines do not cause autism, and GMOs do not cause cancer (or allergies or autoimmune disorders or environmental problems or Indian farmer suicides). Insisting otherwise is now intellectually indefensible.

Yet, the University of California-San Francisco (UCSF) remains a stubborn holdout against reality. UCSF is nothing short of the academic home of the anti-GMO movement. In fact, the university is so dedicated to this position, that it openly collaborates with fringe activists and conspiracy theorists.

U.S. Right to Know (USRTK) is an anti-GMO organization funded almost exclusively by the organic food industry. To its credit, USRTK doesn’t hide it. They openly boast that their financial support comes from [people] like Dr. Bronner, a bona fide snake oil salesman (who peddles everything from fluoride-free toothpaste to aesthetically questionable tie-dye shirts), and the Organic Consumers Association (OCA).

Who is the OCA? Well, it’s a group of conspiracy theorists.

As we wrote previously, the OCA “publishes anti-vaccine propaganda, promotes alternative medicine, lies about nuclear power, and peddles all sorts of conspiracy theories, including 9/11 trutherism, chemtrails, and FEMA’s secret plan to implement martial law.” They also contend that pesticides cause school shootings.

People who believe these sorts of things are usually found yelling on a street corner or in a straitjacket, but they can also be found giving a talk at UCSF. Gary Ruskin, who operates USRTK — and colludes with the Kremlin propaganda outlet RT — gave a talk at UCSF, in which he accused biotech scientists of being liars who knowingly poison the public. 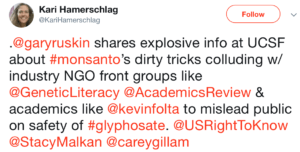 To rub a little extra salt in the wound, UC-Berkeley bussed in some journalism students from a class taught by Elena Conis. Who is Elena Conis? She’s an anti-vaccine sympathizer.

Stop and think about all this for a second. A publicly funded university is using taxpayer dollars to smear other scientists and to promote the beliefs of anti-GMOers and anti-vaxxers. That might be legal, but it’s wrong. It’s unethical. And it really should stop.

UCSF is not accountable to anybody

But it won’t stop. UCSF is not accountable to anybody. The university also collaborates with USRTK to run an archive of cherry-picked e-mails and documents that allegedly “expose” industry secrets. Earlier this year, I contacted the university about this, specifically questioning their anti-biotech rhetoric. They responded but refused to answer any of my questions.

Because there are no consequences for their actions, UCSF continues to behave with utter impunity — usually anonymously, it should be noted. Recently, UCSF applauded comedian John Oliver for smearing us.

Once again, stop and think about that. A publicly funded university is using taxpayer money to smear scientists using “news” that it got from a late-night comedian. So, for a second time, I contacted UCSF with a list of pointed questions. This time, nobody responded. Here is the e-mail I sent in its entirety:

I’m Alex Berezow, a science writer and PhD microbiologist. I am also a contributor to USA Today and several other international news outlets.

I noticed that an official UCSF Twitter feed attacked my employer’s credibility based on a comedy sketch by a late-night comedian. This is the URL:

(Note: I have taken a screenshot, in case the person who operates the feed deletes it.)

As a publicly funded institution, you have a responsibility to be accountable for your public statements. I expect a response by end of business on Wednesday, August 29 to the following questions:

1) Does UCSF PRHE’s Twitter feed represent the official position of UCSF, its medical school, PRHE, or its OB/GYN department?

2) PRHE tweeted that industry perpetuates fake science. Is that the official position of UCSF?

3) PRHE tweeted a comedy video by John Oliver that attacked ACSH as an “astroturf” organization. Is that a position endorsed by UCSF?

4) I have noticed that the UCSF PRHE Twitter feed disproportionately promotes the work of Dr. Tracey Woodruff. In fact, she has been promoted by the feed four times in the last three weeks:

Does Dr. Woodruff operate the UCSF PRHE Twitter account? Is she using official UCSF resources to promote herself and attack other scientists?

4) Does UCSF condone its employees using official university channels and resources to undermine the reputation of other scientists?

It may be tempting to write off UCSF as an anomaly, but it is not. UCSF is simply the most egregious offender among institutions of higher learning. A few months ago, a professor in Europe was fired for being pro-GMO. All across academia, scientific inquiry is being assaulted by postmodernists, or even actively suppressed. If a scientist upsets the wrong person, his research can literally vanish. Scientists who bravely refuse to be silenced suffer character assassination.

And your tax dollars pay for it.

Dr. Alex Berezow joined the American Council on Science and Health as Senior Fellow of Biomedical Science in May 2016. Follow him on Twitter @alexberezow

This article originally appeared at the American Council on Science and Health as UCSF: An Academic Home For Conspiracy Theorists, Anti-Vaxxers and has been republished here with permission.