Viewpoint: GMO crops are key to sustainable farming—why are some scientists afraid to talk about them?

This article or excerpt is included in the GLP’s daily curated selection of ideologically diverse news, opinion and analysis of biotechnology innovation.
Molecular genetic engineering has spawned a strange new allergy. No, not the kind of allergy that causes hives or wheezing; rather, an aversion to mentioning the role of genetic engineering in agriculture. In analyses, reports, and supposedly scholarly articles on sustainable agriculture, individuals and institutions that know better often ignore or downplay the importance of the newer technologies, such as recombinant DNA (“gene-splicing”) and gene editing.

An example of this was just published in the journal Science – a review by Professor Jules Pretty, titled, “Intensification for redesigned and sustainable agriculture systems.”  Less a review than a narrowly-focused, biased opinion piece, it seemed more appropriate to a New Age, anti-technology publication than to Science.

Mr. Pretty, a professor of “environment and society” at the University of Essex, introduced his subject thusly:

Sustainable intensification. . .comprises agricultural processes or systems in which production is maintained or increased while progressing toward substantial enhancement of environmental outcomes. It incorporates these principles without the cultivation of more land and loss of unfarmed habitats and with increases in system performance that incur no net environmental cost.

There’s nothing wrong with the sustainable intensification (SI) concept or its goals, but with the exception of a nod in passing to the Green Revolution’s “new crop varieties” in the first sentence, the article manages to discuss the subject without a single mention of terms like “new genetic varieties,” “genetic engineering,” “GMO,” or “genetic improvement.”  In a “review” of “sustainable intensification” in agriculture as Pretty defines it, that is incomprehensible. 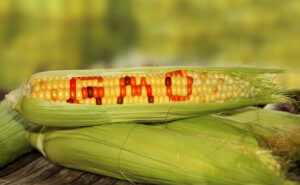 Pretty offers a good deal of abstruse verbiage, such as, “SI seeks to develop synergies between agricultural and landscape-wide system components.”  And: “Three nonlinear stages in transition toward sustainability have been proposed to occur: efficiency, substitution, and redesign. Although both efficiency and substitution are important, they are not sufficient for maximizing coproduction of favorable agricultural and beneficial environmental outcomes without redesign.”

We are puzzled at how one can discuss “efficiency, substitution, and redesign” in agricultural practices without any mention of the critical contributions of new, improved genetic varieties over the past two decades.  It’s like addressing those same qualities in home design without mentioning terms like roof or foundation.  Specifically, the introduction of crop plants modified with molecular techniques of genetic engineering – sometimes referred to as “GMOs” — has made prodigious contributions to farm income and environmental benefits by means of changes in tillage practices, and pesticide and herbicide use.

Pretty’s observation that SI “is now a priority for the Sustainable Development Goals of the United Nations” is noteworthy, because UN agencies such as, incomprehensibly, its Food and Agriculture Organization (FAO), are notorious for their unwillingness to acknowledge the already-prodigious scientific, economic, and humanitarian contributions and future potential of genetic engineering in their reports and analyses. 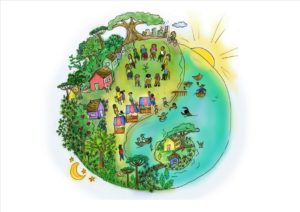 Instead of state-of-the art science, the FAO peddles “agroecology,” which it defines as “a scientific discipline, a set of practices and a social movement,” focusing on “how different components of the agroecosystem interact…[and create] sustainable farming systems that optimize and stabilize yields.” However, given that agroecology rejects many modern technological and biological agricultural advances, it is unlikely to produce yields that will keep up with population growth and changing consumer diets associated with higher incomes and urbanization. Most scientists dismiss it as a combination of wishful thinking and ignorance and consider it a threat to developing countries’ food security.

By contrast, a report from the World Resources Institute released on December 5 was both more scientific and realistic:

Increased efficiency of natural resource use. . . is the single most important step toward meeting both food production and environmental goals. This means increasing crop yields at higher than historical rates, and dramatically increasing output of milk and meat per hectare of pasture.

How do we do that?  They concluded:

Conventional breeding, the selection of best-performing crops based on genetic traits, accounted for around half of historical crop yield gains. New advances in molecular biology offer great promise for additional yield gains by making it cheaper and faster to map genetic codes of plants, test for desired DNA traits, purify crop strains, and turn genes on and off.

In addition, for decades the National Academies of Sciences, Engineering, and Medicine have documented the economic and environmental benefits of genetic engineering, most recently in a voluminous report released in 2016.  It concluded that the introduction of genetically engineered varieties that incorporate a natural pesticide (one or more proteins from the bacterium Bacillus thuringiensis) reduced overall pesticide use and pest populations (and therefore benefited even non-genetically engineered crops, the so-called “halo effect”), and increased insect diversity.  It also found that the cultivation of herbicide-resistant crops resulted in an increase in yield without any decrease in plant diversity.

When it comes to the importance of genetic engineering in sustainable agriculture, the highly politicized UN is clearly beyond help, either ignoring it or trying to impose excessive, unscientific regulation.  But Pretty’s unpretty review is surprising. Its shallowness does no credit to him or to Science.

Colin A. Carter is Professor, Agricultural and Resource Economics, at the University of California, Davis