This article or excerpt is included in the GLP’s daily curated selection of ideologically diverse news, opinion and analysis of biotechnology innovation.
There’s a problem facing college biology educators on how to teach evolution in a setting where many students hold creationist views. These evolution deniers are not a fringe element on college campuses, even among students in science, technology, engineering, and math (STEM) fields. There are substantial numbers of college STEM students who begin college biology already with minds set against evolution. Instead of writing those students off as lost causes, educators are trying different approaches to reach them.

Arizona State University, for instance, has used an innovative approach to reaching students who begin college as creationists, an approach that was highlighted at an earlier meeting of the American Association for the Advancement of Science (AAAS). And at the City University of New York’s John Jay College, for example, evolution has taught using a strategy that not only works, but is founded on educational studies conducted within the science department.

Less than 50 percent of Americans accept evolutionary theory — when all age groups are included in polling. This is despite evolution being the basis of biology and being accepted universally within the US science community.  A smidgen of hope lies in the fact that the proportion of young people accepting evolution has been on the rise.

Recognizing that there are sizable numbers of creationist-minded students on college campuses, the teams in Arizona and New York have cited studies showing that such students typically hold major misconceptions concerning the nature of science, as well as the specifics of Darwin’s theory of natural selection and the major points of evolution that have developed since Darwin’s time. Examples of a misconception include not realizing that the term ‘theory’ conveys a very high level of certainty in science. More generally, students often don’t have a grasp of the scientific method, and therefore fall prey to fallacies that creationists promote.

What all methods have in common

“We should be teaching students how to think scientifically rather than learning facts as if they fell from the sky,” said Nathan Lents, professor of molecular biology at John Jay, alluding to biology instructors who teach evolution geared toward the small number of students bound for life science graduate programs. This excludes the vast majority of those taking undergraduate biology courses as a requirement for professional training in health sciences. In the latter case, it’s possible for a student who rejects evolution to learn the facts for the sake of exams, and then ‘forget’ them. After all, one can function as a perfectly competent physician, dentist, or allied heath professional without giving a thought to evolution. If the goal is actually to reach such students and educate them, however, few would disagree with Lents’ facts-from-the-sky remark.

That is a mandatory starting point for any serious evolution instruction, as is the notion that students who begin college as creationists are not a lost cause. Once the goal is to educate ALL students, both STEM majors and others, who take introductory college biology (as well as upper division courses) in evolution, there is room for discussion about one strategy versus the other.

A few years ago, evolutionary biologist and author Richard Dawkins spoke one-on-one with students at London’s Park High School, where students were known to have an anti-evolution mindset connected with religious upbringings. Dawkins was able to make a point of the fact that the various religions in which the students were raised — Christianity, Hinduism, and Islam — disagreed amongst themselves on traditional creations stories, but that all included leaders who were both religious and yet accepted evolution.

At Arizona State, on the other hand, instructors generally don’t have this luxury, since just about all evolution-denying students on the Tempe, AZ campus come from one religion — Christianity. Professor Sara Brownell and doctoral student Elizabeth Barnes study how to teach evolution effectively to college biology students. Their instructional strategies include discussing religious scientists who accept evolution, including Francis Collins, director of the US National Institutes of Health.

There also are examples of religious leaders who are not scientists, but accept evolution. Among them is the Archbishop of Canterbury, whom Dawkins has mentioned as an example in the UK.

“[Our] work is potentially impactful for upwards of 50 percent of college students in biology classes who identify as religious and could face challenges reconciling their religious identities with evolution,” Brownell said via email, citing a study about reducing the perception of conflict between religion and evolution.

Not everyone agrees with the reasoning that allows people to continue believing in their religions alongside acceptance of evolution. The Arizona researchers have no problem with it. “[The strategy also] includes instructors discussing that religion and evolution are not necessarily at odds,” Brownell wrote. Elsewhere, though, there are instructors who deal with the situation without ever discussing religion.

At John Jay in New York, for instance, Nathan Lents sees no need to mention scientists who accept evolution and religion together. “It’s just because I don’t frame what I’m doing as an effort in trying to convince them of something,” Lents said. “I just teach the material, teach the classes, and I don’t really talk about the fact that I am interested in, and working on, their beliefs about evolution. I’m always afraid that if I declare my intentions, they’ll put up the intellectual walls and that will be it.”

But in terms of the actual teaching process, Lents has a great deal to say, much of it based on methods that he has tested and discussed with colleagues in peer-reviewed papers:

What we have found is that we do much better in helping students understand when we allow them to see and work with the data themselves and allow them to draw their own conclusion. I’ve done this with DNA sequences, protein sequences, chromosomal structures, and cranial anatomy. When I just show students the data and ask them to examine them from all sides and come up with a working theory, they feel empowered to think for themselves. They starting doing science instead of just learning about science. And it works! A lot of previously resistant students are more open to ideas about evolution when they see how those ideas are actually developed, rather than just being told the answers.

This approach is based on the fact that acceptance of evolution tracks closely with understanding of it. According to Lents:

That was the beauty of Darwin’s big revelation about natural selection – like almost all big scientific breakthroughs, the elegance is in the simplicity. Just like Einsteins’ theory of special relativity, an incredibly complicated topic, can be boiled down to E=mc2, natural selection can be boiled down to the idea that those who leave more successful offspring in a highly competitive world will see their genetic traits increase in abundance over time. The theory is quite simple, but the implications are complex, of course./

But what about the students who are hardened in their resistance to scientific ideas about the origin and nature of life and the Earth? To identify such students, Lents and his colleagues at John Jay have established survey questions related to the age of the universe. 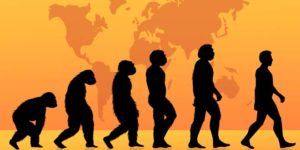 “If someone believes the entire cosmos is just a few thousand years old, that’s some pretty hard-core science denial and unlikely to change easily,” he said. But those students represent an extreme end of the belief spectrum, which actually can be useful for comparison studies. “We even used these as control questions for measuring change on the other questions.”

Perhaps unexpectedly, studies conducted by the John Jay team have revealed a specific intervention strategy that works well in weakening erroneous beliefs: teaching about the evolution of gender and sexuality.

“[We begin gender/sexuality evolution] without explicitly addressing evolutionary theory or origin of life,” Lents said. It works based on findings that he published in a paper in the Journal of Phylogenetics and Evolutionary Biology in 2013. “My guess is that the topic is interesting enough to young people and without the explicit evolutionary focus, they let their guard down a bit and some of the science actually gets through.”

Whatever the underlying reason, once that guard is down, a student is no longer a lost cause, which has given Lents hope that he might eventually develop a method for providing students a deeper understanding of evolution.

“First, [one can] get [the students] loosened up by teaching about the diversity of gender and sexuality in nature and the evolutionary goals and origins,” he said. “Then, follow that up with more exploration of evolutionary theory itself.”

A version of this article originally ran on the GLP in August 2017.

Musician Nicki Minaj hesitates to get a COVID vaccine because it ‘caused a friend of a friend to become impotent’. Let’s review the evidence