Alison Van Eenennaam | February 19, 2020
This article or excerpt is included in the GLP’s daily curated selection of ideologically diverse news, opinion and analysis of biotechnology innovation.

Finally, during the course of the January 2020 two-day event featuring Dr. Vandana Shiva at UC Santa Cruz, there was a nonstop attack on the weed killer glyphosate (and by association its manufacturer Monsanto, now owned by Bayer). The thousands of lawsuits filed against the company were of course mentioned, along with the 2015 IARC hazard classification of glyphosate as a probable carcinogen.

Perhaps predictably, there was no mention of the US Environmental Protection Agency (EPA) RISK determination which reaffirmed glyphosate as safe to use and non-carcinogenic; the 2018 pesticide applicator study, which found no apparent association between glyphosate and any solid tumors or lymphoid malignancies overall; or the response of potentially affected farmers to looming glyphosate bans in other countries, such as France and Germany.

Dr. Shiva alluded to a 2014  Sri Lankan paper that suggested glyphosate was partially responsible for chronic kidney disease of undetermined causes (CKDu). CKDu disease has emerged as a major illness among workers in hot climates.  The authors of this study posited that glyphosate “may destroy the renal tissues of farmers by forming complexes with a localized geo-environmental factor (hardness) and nephrotoxic metals.” Dr. Shiva highlighted this research, in part because the authors were awarded the 2019 AAAS Scientific Freedom and Responsibility award for proposing that there was “a possible connection between glyphosate and chronic kidney disease.” [Editor’s note: The AAAS later corrected their comments about the link between glyphosate and kidney disease.] 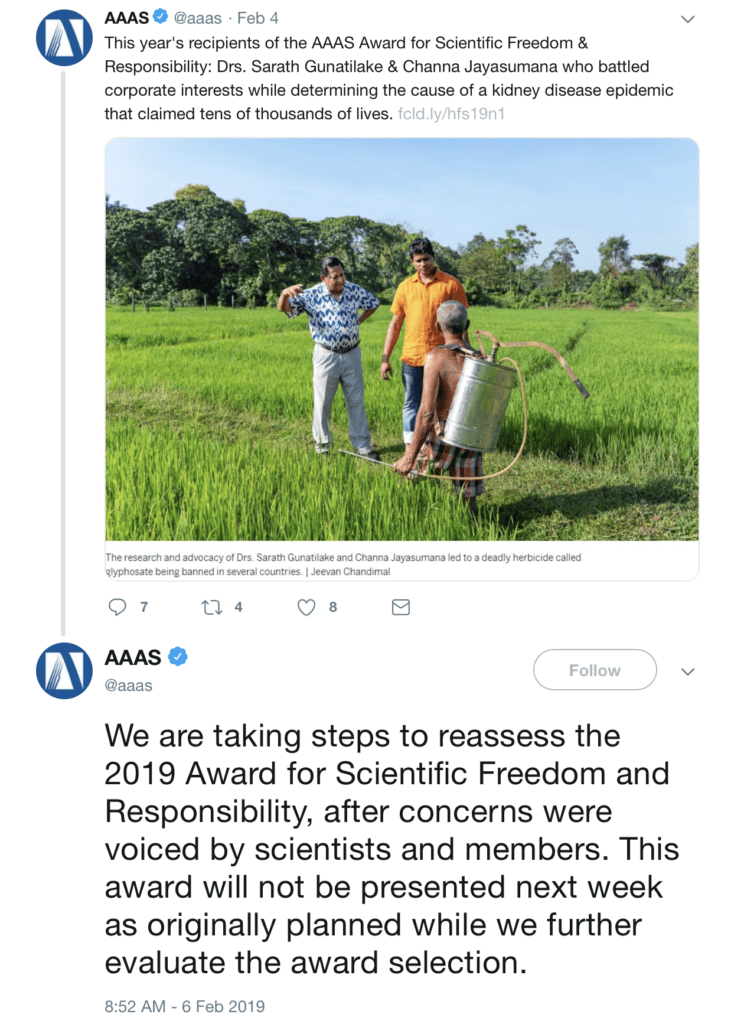 A more recent systematic 2018 review and meta-analysis of data collected to actually test that hypothesis “found little evidence that pesticides were the main cause of CKDu in Central America.” This research was (again unsurprisingly) not mentioned. However, this Sri Lankan example provides an interesting case study of what eliminating glyphosate meant for that country.

Owing to social pressure created by the 2014 paper, the Sri Lankan government banned glyphosate in 2015. The consequences of that decision on smallholder farmers, income disparity, female farm workers, soil erosion, and public health are outlined below. They provide a cautionary tale of what happens when unsupported hunches, rather than objective evidence, drive agricultural policy, as detailed in this 2018 report by researchers at the University of Ruhuna in Sri Lanka. Ironically, the glyphosate ban exacerbated many of the problems Shiva and her supporters said the ban would help prevent. According to the Sri Lankan researchers:

The ban has imposed significant economic costs on growers of all operation sizes – but smallholders have been most negatively affected. Over 94% of smallholder corn farmers reported a reduction in family income, while over 86% farmer in corn have reported that family income has reduced and cost of production has increased. Over 40% of tea farmers reported a reduction in family income, while increased weed prevalence has reduced yields for over 40% of corn farmers. There has been a decline of 11% in tea production during year 2016 compared with year 2015.

Food production in agricultural areas has reduced and the income of the farmers with limited resources has also reduced. Therefore, food security of the rural farmers has been challenged. Also, the disparity of the income between resource-rich and resource-poor farmers has widened. Rich farmers have the capacity to face the consequences of the banning glyphosate since they have tractors while the poor farmers have to face the increased rate of hiring charges of tractors and increased prices of available illicit herbicides. Migration of rural youth from the rural areas to the urban centers due to increased costs of cultivation has created labour scarcity in agricultural areas which leads to negligence of productive lands.

Increased use of tractors in sloping lands of Monaragala and Anuradhapura districts in maize and field crop cultivation in Maha season, had led to severe soil erosion. About 80% of the farmers verified that the erosion has drastically increased with the use of tractors in the absence of suitable herbicide. Further, mechanization because of absence of glyphosate has also affected farming under drip irrigation as mechanical weeding damages the irrigation pipes and system.

The study also showed that Kalanduru, a difficult weed to control in the absence of glyphosate, has become a threat in Chili fields. Due to enhanced weed pressure, in crops that need intensive care such as chili, farmers cultivate only manageable portion of their land abandoning the rest creating a suitable ecosystem for of pigs and snakes to survive and reproduce, leading to challenging public health scenarios.” 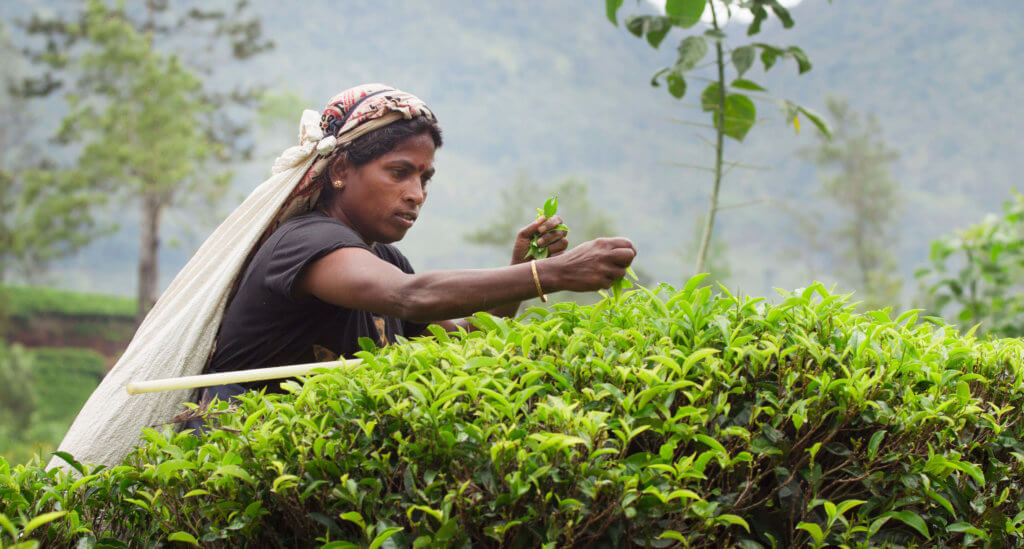 The Sri Lankan government ultimately reversed the ban against glyphosate on July 11, 2018. According to an article in The Sunday Times, “In the absence of an effective alternative weedicide, however, the tea industry in particular was severely hit, with plantations becoming plagued by weeds, and resulting in a drastic drop in production.” A senior research officer at the Sri Lankan Office of the Registrar of Pesticides, Lasanatha Ratnaweera, said the ban was clearly a political decision. He pointed out that his department had nothing to do with the decision.

Decisions on modern technologies in agriculture should be based on the scientific research findings published by the scientists in the relevant field. Agriculture chemicals have played a critical role in crop production and this study has shown the impact of glyphosate ban on crop production in Sri Lanka. Following glyphosate ban, the cost of production of maize and tea has increased, the yields are impacted, the farm income has reduced, and illicit chemicals are proliferating in the market.

— Dr. L. M. Abeywickrama, Faculty of Agriculture at the University of Ruhuna in Sri Lanka

Back at the “Poison-Free, Fossil-Free Food & Farming” workshop at UC Santa Cruz, the audience was subjected to even more glyphosate misinformation. One of the Sunday afternoon breakout sessions was titled “glyphosate, the main ingredient in Roundup, its widespread use in the world, and the dangers it creates for the health of people, plants and soil.” Dr. Shiva had left the event by this time, but this was still a workshop hosted by a university. As a participant, I expected to see evidence-based information. It felt more like I was a participant in Gwyneth Paltrow’s GOOP lab.

During the event, it was suggested that glyphosate was associated with a cancer called non-Hodgkin’s lymphoma (NHL), although again no mention was made of the 2018 pesticide applicator study that involved more than 50,000 applicators and found no association between “glyphosate and any solid tumors or lymphoid malignancies overall, including NHL and its subtypes.” I would have expected this research to be discussed or at least referred to at a university workshop. 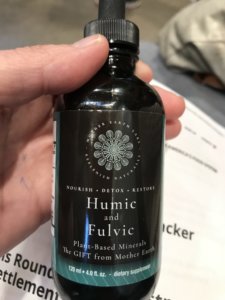 I was also told I would likely have high levels of glyphosate in my urine, and that I should take a test offered by anti-GMO activist John Fagan, at a discount rate. I was also offered a product that would “cleanse” (aka detox) my body of glyphosate, and warned that California beer and wine are high in glyphosate. I am pretty sure they are packed full of a proven carcinogen too—alcohol. Else I want my beer money back!

But then the list of ailments resulting from glyphosate exposure continued, based on a list of articles and internet links provided by anti-GMO scientist Don Huber that inexplicably contained no references more recent than 2013. These questionable resources suggested that glyphosate was also associated with honey bee mortality, birth defects, kidney disease, infertility, low testosterone, small penises and testicles, chronic botulism, fungal toxins, livestock deaths, and babies born without brains and one eye.

Wait–what?  The last one really hit me–because of the associated images that came along with it (below), fully supported by an article in Natural News, an alternative health website known to promote junk science and conspiracy theories. There was also the bizarre suggestion that Monsanto had increased the allowable level of glyphosate in Washington State so as to coverup that these birth defects were caused by glyphosate, rather than a folic acid deficiency as suggested by the Washington State Department of Health.

This information and these images were presented at a University of California-sponsored workshop, at an institute of higher learning my own son attends! Irrespective of the fact that I am myself the mother of a stillborn baby, I find the exploitation of such tragic images to mislead and frighten parents and would-be parents into believing pseudo-science garbage to be repugnant. The fact that this scaremongering was presented as science at a university event makes it an educational disgrace. There were UC Santa Cruz personnel at this event, helping to project these images, enabling this propaganda to be distributed, unchallenged.

I owe my graduate education, over 20 years of fulfilling professional employment, and even meeting my husband to the University of California, but on this day I was embarrassed to be a UC alumna, a faculty member, and a UC parent. We owe it to the citizens of California to do better. If public universities become the distributors and amplifiers of misinformation, I seriously wonder what institutions the public will have left to trust.

I will finish this BLOG series with a quote from Sri Lankan researchers Buddhi Marambe, Senior Professor in the Department of Crop Science, Faculty of Agriculture at the University of Peradeniya, Sri Lanka, and Swarna Herath. They detailed the effects of the ill-advised ban on glyphosate in their country in a November 2019 Weed Science paper, which offers a glimpse of what can happen when ideology over-rules scientific principles:

“The ban on glyphosate has been imposed without scientific evidence. The agriculture sector and the Sri Lankan economy [have] taken the brunt of this disastrous and abrupt policy decision. Climate change has further exacerbated the impact of ban imposed on glyphosate. By nature, weeds thrive and compete vigorously with crops when resources are limited and negatively impact on the final harvests. With the ban imposed on importation of glyphosate to the country, it has opened avenues for the entry of illegal products with no quality control. Hence, the agricultural practitioners have become the victims again.

The societal forces based on political and spiritual ideologies have unfortunately continued to succeed in Sri Lanka, over-ruling even the most basic scientific principles. Hence, policy makers must follow science and make evidence-based decisions considering the totality rather than focusing political gains out of the situation. Scientists, too, need to support the policy makers by being open and providing conclusive and scientifically valid data to facilitate decision making.”