Coffee of the future? Lab-made ‘molecular’ version might feed the world’s caffeine habit while sparing the environment

This article or excerpt is included in the GLP’s daily curated selection of ideologically diverse news, opinion and analysis of biotechnology innovation.
The coronavirus pandemic has led to many shifts in how we eat, but our collective coffee habit remains strong. As coffee shops and restaurants have shut down to reduce the spread of the disease, Americans have consumed 7.6% more coffee at home in the first quarter of 2020 and are drinking more instant coffee.

Indeed, coffee is the most commonly consumed beverage in the world following water and tea. Brazil has been the leading coffee producer since 1840, and an estimated 8 million Brazilians work in the industry across some 360,000 estates, many of which are small family farms. The top four global consumers are Scandinavian, led by Finns at number one (12.2 kg per person annually). Canadians are at number 10 (6.5 kg), Brazil at number 14 (5.8 kg), and the US at number 25 (4.2 kg). China lags far behind, though coffee production is on the rise and consumption has increased 16% annually during the past decade, in part due to the explosion of coffee shops.

Yet, like many things in our diet, our beloved beverage comes with a hidden cost, including the working conditions of the people who grow it and the environmental impacts of production. That’s because today’s coffee is grown on the land, by farmers.

Is lab-grown coffee a better choice?

In most settings, forests are cleared to plant coffee, often as a single crop (i.e., monoculture) that negatively impacts biodiversity by decimating the homes of native flora and fauna. And, like all crops, coffee is susceptible to a number of different pests; notably, pathogens Hemileia vastatrix and H. coffeicola have infected almost all of the world’s plantations, causing an epidemic of coffee leaf disease.

While there are many ways to manage so-called coffee rust, most growers employ copper fungicides, which preserve yields but lead to copper build-up in the environment that compromises soil health and puts organisms—including farmers—at risk. Moreover, coffee producers are often undercompensated and exploited, earning little for the cherished crop. A 2016 report from Coffeelands, a project of Catholic Relief Services, revealed slave labor in 15 coffee estates in Brazil. All of these factors have contributed to a consumer movement that demands more sustainably and ethically grown coffee that protects the environment and treats farmers fairly.

And there are plenty of options.

Organic refers simply to the production methods, including forbidding the use of synthetic chemicals, but that’s just the beginning. Rainforest Alliance Certified™ coffee is committed to environmental sustainability; Fair Trade International supports cooperatives of small farmers with a livable wage; and Bird Friendly® beans promote biodiversity and soil health through organic, shade-grown coffee. In contrast to sun-grown coffee grown in massive monoculture plantations, shade-grown coffee builds ecosystems that provide numerous benefits. Specifically, it creates a habitat for birds and other species, natural pests and pollinators that, in concert, reduce the need for external crop management such as pesticides. The “multi-layered canopy” of diverse trees and shrubs of varying sizes also slows the speed of falling rain, thus reducing run-off and soil erosion; some species also contribute nitrogen to the soil, reducing the use of fertilizers.

Some companies also have their own programs, like Starbucks’ C.A.F.E. (Coffee and Farmer Equity), that encourage both environmental and ethical practices—though most beans aren’t organic. What if you could skip all of that research to select the greenest coffee—and circumvent a host of social, environmental, and economic problems in the industry in so doing?

Is lab-grown coffee the solution?

Enter Atomo coffee, the latest addition to your table through agriculture from the lab instead of the land. The company “reverse engineered the coffee bean to create a better cup of coffee” and has raised $25,331 on its Kickstarter campaign, more than doubling its initial ask.

The critical issue, however, is what is meant by “better.” 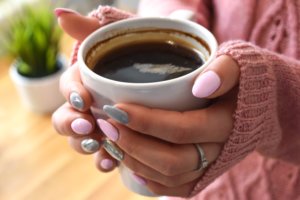 How molecular coffee stands up to beans will ultimately require a life cycle analysis, which accounts for all environmental costs related to production, processing, packaging, transportation, consumption, and disposal. Likely, a lab-grown libation will be better on a number of accounts. Notably, Atomo aims to “upscale” a brew from things that might otherwise contribute to waste, like watermelon seeds or sunflower seed husks. And its aim isn’t to put coffee farmers out of business but, rather, to curb deforestation and mitigate other negative impacts inherent in traditional coffee production.

Related article:  Viewpoint: GMO crops should become a bigger part of the food system if we want a sustainable society

These are good things.

Atomo coffee’s exact chemical composition is in development. The ultimate goal is to replicate the desired properties of a brew made from beans that can be enjoyed black, because it’s “healthier.” Indeed it is. While developing a taste for unadorned coffee is possible, making the switch from “regular” to black requires time and effort to adjust the palate. And it may seem impossible to those with heightened sensitivity to bitter tastes, which can be genetic. Atomo’s developers believe it is an aversion to coffee’s bitterness that drives the addition of fat and sweeteners to coffee, and it is for this reason Atomo’s beverage will remove some of these components.

The catch is that some of coffee’s bitter-tasting chemicals contribute to its health prowess, like chlorogenic acids that feed “good” bacteria in the gut and contribute to a nourishing microbiome. Coffee is also a leading source of dietary antioxidants and includes more than one thousand known phytonutrients, potent plant chemicals with both sensory and nutritional effects.

In part due to these properties, as well as its caffeine, research has shown consistent associations with reduced risks of cardiovascular diseases and type 2 diabetes and improved liver functioning in a number of diseases. A 2019 meta-analysis of 40 studies with 3,852,651 subjects saw a decreased risk of death from all causes among those drinking 2 to 4 cups of coffee daily compared to non-drinkers. Some studies also suggest protection against depression and neuro-degenerative conditions like Parkinson’s and Alzheimer’s as well as dementia.

Also: No, coffee doesn’t cause cancer. And it contributes to hydration, too. Don’t buy into single-study sensationalism and junk science when it comes to dietary advice. 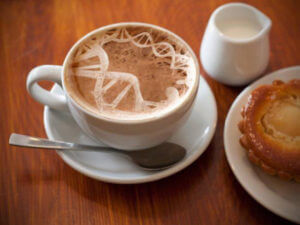 Coffee’s story is like so many others in nutrition, a science that evolves like any other. We don’t always know exactly which chemical(s) and in what combinations are responsible for an individual food’s health impact—and we often see different results when considering the whole food rather than its singular components. Considering  coffee and caffeine—one of its claims to fame—is illustrative. Caffeine is a the most widely consumed psychoactive drug in the world, a stimulant that raises blood pressure in some. Yet coffee contains thousands of bioactive chemicals with antioxidant, anti-inflammatory, and other actions that, in concert, are generally beneficial for health—with little deleterious effect on blood pressure in habitual consumers. Coffee consumption has also been related to a reduced risk chronic diseases and increased longevity in scores of studies over the decades, creating considerable scientific consensus on its salubrious effects.

In other words, the whole (food) is greater than the sum of its parts, and simply putting together the known components may not necessarily evoke the same health effects; indeed, some relevant chemicals may have yet to be discovered. Thus, it seems unlikely that a molecular brew could fully capture the exact combinations to evoke the same health effects—at least, not at this point in our state of knowledge about all things coffee.

That’s not necessarily a problem, however. Plenty of food substitutes—plant-based meat versus beef, dairy versus non-dairy milks—don’t purport to have identical nutritional composition and often possess their own salubrious properties. Moreover, simply moving consumers from sugar- and cream-laden coffee to black is a huge win for health.

Whether consumers will go for lab-grown coffee remains to be seen, though taste tests at the University of Washington, Atomo’s academic home and testing ground, are promising. Moreover, a 2015 Nielsen survey of 30,000 people in 60+ countries found that 72% of Gen Z (aged 15-20) are willing to pay more for a sustainable product, up from 55% in 2014, alongside 73% of millennials. And current brands are having trouble keeping up, creating room for innovation and disruption that meet increased demands.

Few coffee producers and distributors do all things for all causes. Today’s eco-conscious consumers are provided plenty of choices to do the right thing for the planet and plantation workers alike.

Atomo’s molecular brew will one day offer another option.

P.K. Newby, ScD, MPH, MS (“The Nutrition Doctor”) is a scientist and author with twenty-five years’ experience researching diet-related diseases and teaching why what we eat matters, from farm to fork. Visit her website and find her on Facebook.