Some medical conditions can’t be ethically investigated in humans, so researchers are finding interesting ways to grow people parts in the bodies of other types of animals. Jian Feng and colleagues at the University at Buffalo recently engineered prenatal mice that have human cells in key parts of their anatomy. Their report appears in Science Advances.

The humanized mice may one day incubate human cells needed for treatments of chronic diseases like kidney failure and diabetes, and provide new and improved models of how the human body succumbs to various conditions, from cancer to degenerative conditions to COVID-19. 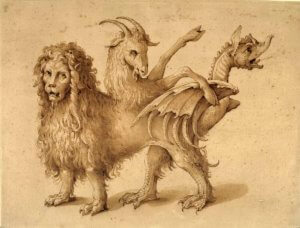 A brief history of mosaic mammals

The new work is a twist on the classic chimera of Greek mythology, a “hybrid monster” that lived in Lycia in Asia Minor. It had a lion-like body and head with a goat’s head emerging from its back and a winding tail tipped with a viper.

In Woody Allen’s take on the chimera in his 1973 film Sleeper, protagonist Miles Monroe, catapulted into an uncertain future, fears a creature with the “body of a crab and the head of a social worker.”

Biotechnology has also seen its share of mixed-part creatures.

The famed photo of a human ear protruding from a mouse’s back was largely misunderstood because of its grotesqueness – but it was created to demonstrate the ability to grow spare parts from one species in the body of another.

To fashion the mouse, in 1997 in Boston, the pioneering Vacanti brothers placed bits of a synthetic, biodegradable polymer seeded with cartilage cells from cows and shaped to resemble a child’s ear into pockets beneath the skin of ten mice. The strain of mice lacked immunity, so they didn’t reject the grafts.

Three months later, when the researchers removed the implants, they discovered much larger ears. The implants had added cells to the scaffolding.

A less spectacular example of a chimera comes not from strange research but from rather routine clinical medicine – heart valves from pigs. This is a xenograft, which is a transplant between species.

Heart valves are tiny, and that may be why they’re tolerated. Humans bearing large organs from other types of animals don’t tend to fare as well. In 1984, a baboon heart placed into the body of newborn Baby Fae  kept her alive for a month. The intervention was considered a success for someone missing half her heart.

Another variation on the chimera theme arose in 1997. Nineteen-year-old Robert Pennington, suffering from acute liver failure, stayed alive for 6.5 hours as the disembodied liver of Sweetie Pie, a 15-week-old, 118-pound pig, processed his blood until a donor human organ became available.

Sweetie Pie was a genetically modified pig: her cells displayed a human protein that kept organ rejection at bay. Thanks to this bit of engineered humanity, plus immunosuppressant drugs, Pennington’s body tolerated the porcine assistance for the few crucial hours, as a “bridge-to-transplant.”

More recently, researchers seeking to engineer chimeras have mixed parts at the early blastocyst stage of the embryo. A blastocyst is a ball of cells, with a smear of cells to one side that develops into the embryo. Marker molecules, such as the jellyfish gene that encodes green fluorescent protein (GFP), are included so that the introduced structures glow green, the badge of otherness persisting as the engineered animal develops.

One type of experiment cleverly uses recipient animals bearing mutations that prevent a certain organ from developing, which donor cells from another species can replace. In 1997, researchers at Stanford University coaxed mouse pancreases to grow in rats this way. Insulin from the mouse cells was then used to treat mice with diabetes.

At about the same time in 2017, Juan Carlos Izpisua Belmonte, from the Salk Institute of Biological Studies and his team, conducted experiments similar to the rat/mouse ones. They incorporated human stem cells into pig blastocysts missing certain parts, either due to a natural mutation or by editing out genes. In Cell they described the pig/human chimeric embryos, which they allowed to develop for four weeks. “This is long enough for us to try to understand how the human and pig cells mix together early on without raising ethical concerns about mature chimeric animals,” said Belmonte.

Fortunately, the human cells ended up, scantily, in pig muscles – the fear was that they’d take up residence in the pig’s brain, evoking an image of the Pigman episode of Seinfeld. “The government’s been experimenting with pig-men since the ’50s!” warned a terrified Kramer after claiming to have spied one such creature hidden on the top floor of a hospital.

Related article:  Defining life: If it's created in a lab, is it really alive?

Or worse, human cells might have meandered into the germline, becoming eggs or sperm of a pig.

“We wanted to know whether human cells can contribute at all to address the ‘yes or no’ question. Now that we know the answer is yes, our next challenge is to improve efficiency and guide the human cells into forming a particular organ in pigs. The ultimate goal is to grow functional and transplantable tissue or organs, but we are far away from that. This is an important first step,” Belmonte said in 2017. Here’s an update.

Pigs are important in transplantation research when the goal is to fashion organs like ours, because at the organ level, size matters. A pig heart isn’t much different in size from a human one. But in the work from the University at Buffalo,, millions of mature human cells were nurtured in mice until day 17 of the 20 days of prenatal development.

The researchers used existing human iPS cells and human embryonic stem (ES) cells – laboratory standards, so no embryos newly sacrificed. If the human cells could thrive in mouse bodies, then the rodents could incubate human cells useful in research – which tend to poop out when cultured outside of an organism. The mice might also model various diseases, depending upon where the human cells wind up.

But before researchers can fashion and nurture anything as complex as an organ, they must first track the developmental potential of the human stem cells sent into embryos of another species. Where would the introduced cells settle within the classic three layers – outer, middle, and inner – of an animal embryo?

Cells of the ectoderm, mesoderm, and endoderm layers are destined to become specific parts of the animal. For example, ectoderm develops into skin, endoderm into the digestive tract, and mesoderm spawns most of the rest of a mammal’s body.

The researchers injected 10 to 12 human stem cells into each mouse embryo on day 3, when they’re hollow balls of cells, the volleyball-like blastocysts. The mouse embryos incorporated the human cells, which then divided until millions were present as birth neared.

The manipulation entailed exquisite tweaking of the developmental timetables to align a 20-day gestation with a nine-month one, using biochemical broths on the embryos in culture.

The human cells, marked by the green glow of GFP, ended up as lots of red blood cells congregating in the livers of the mouse embryos, and also in the eyes and heart. Feng and colleagues counted up to four percent of the cells in the mouse embryos as human, but that’s an underestimate because red blood cells don’t have nuclei and DNA is the basis of counting.

Although the work is at the basic research stage, Feng foresees applications. “Further development of our technology could enable the generation of large quantities of specific types of mature human cells to allow us to create more effective mouse models to study diseases that gravely affect humans, such as malaria or COVID-19.”

A mouse model of COVID-19 would include components of the human immune system and perhaps of the parts of the human respiratory system most vulnerable to SARS-CoV-2, the virus behind COVID-19 – which barely affects mice, Feng added. He also suggested that mice producing mature human red blood cells could be used to investigate the stages of malaria.

“We have a lot of questions to answer before the technology can be useful, but this is the first time that anyone has generated so many mature human cells in a mouse embryo,” summed up Feng.