This article or excerpt is included in the GLP’s daily curated selection of ideologically diverse news, opinion and analysis of biotechnology innovation.
Insect-resistant Bt cotton has been the subject of controversial debates for many years. Bt cotton is one of the few genetically modified (GM) crop technologies already used by smallholder farmers in developing countries. In India, the largest cotton producer worldwide, Bt cotton was commercially approved in 2002 and has been grown by millions of smallholder farmers since then. Around 95% of all cotton growers in India have switched to Bt technology.

Several studies showed that Bt adoption has significantly improved cotton yields and farmers’ livelihoods in India. However, there are also a few studies claiming that Bt cotton has small or even negative social effects. Unfortunately, not all studies are credible in terms of the data and methods used. This is also true for a new paper by Andrew Paul Gutierrez and colleagues [1] published recently in the journal Environmental Sciences Europe. 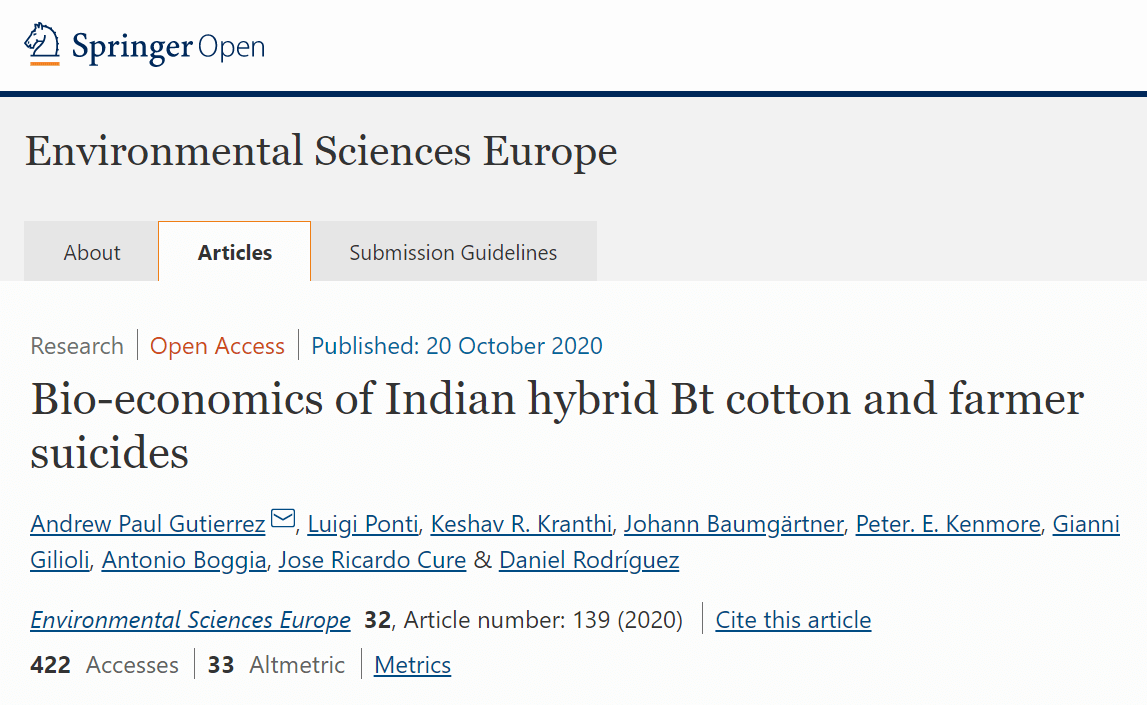 In their paper, Gutierrez et al. [1] use weather-driven physiologically-based bioeconomic models of the cotton production system to simulate plant growth and pest development. These models were originally developed for conditions in California and, in this new paper, were calibrated with data from different states in India. Model simulations were run for two scenarios: one in which Bt cotton hybrid seeds are used, and the other in which non-Bt cotton short-season varieties are used. Model calibration builds on various assumptions and regression estimates with state-level data. Based on their analysis, Gutierrez et al. conclude that Bt hybrids in India lead to “stagnant yields, high input costs, increased insecticide use, and low farmer incomes that increase economic distress that is a proximate cause of cotton farmer suicides.” The authors further conclude that non-Bt short-season varieties “could double rainfed cotton yield, reduce costs, decrease insecticide use, and help ameliorate suicides.”

However, these conclusions by Gutierrez et al. are not at all supported by their data and analysis. In fact, the authors’ main claims on Bt yields, input costs, and farmer suicides are not derived from their bioeconomic modeling but from false assumptions, poorly specified regressions, and misinterpreted data. I explain some of the main issues with this paper below.

Gutierrez et al. do not analyze yield effects of Bt cotton, they simply assume that Bt has zero yield advantages over non-Bt varieties. In their regression to explain yield, they fail to include Bt as an explanatory variable. Nonetheless, in connection with this regression they write (p. 9) “The % of area planted to Bt cotton is not significant…”, citing another paper by Kranthi and Stone [2]. But Kranthi and Stone [2] did not use any regression models in their paper; they only provided a graphical analysis, based on which causal inference on yield effects is not permissible [3]. Various other studies with better data and methods showed convincingly that Bt cotton has led to large net yield gains in India [3-5]. Hence, the main assumption by Gutierrez et al. is wrong, and so are all their other results, which crucially depend on this assumption.

Gutierrez et al. do not have detailed data on farmers’ input costs. Instead, they make dubious assumptions. For instance, they assume that the cost of Bt seeds is 53$ per ha higher than the cost of non-Bt seeds. In reality, the seed cost difference is in a magnitude of only 13$ per ha [4]. Gutierrez et al. do not only overstate the cost of Bt seeds, they also understate the cost of non-Bt seeds by assuming non-Bt farmers would use farm-saved cotton seeds. Use of farm-saved cotton seeds hardly exists in India, with or without Bt.

Gutierrez et al. do not really analyze the effects of Bt cotton on farmer suicides. What they do in one of their regressions is to show that the number of suicides in a state is negatively associated with average cotton yields and positively associated with seed and insecticide costs. But – given that their assumptions on Bt yield and input costs are wrong – their interpretation of a hypothetical positive relationship between Bt cotton and suicides is wrong as well. Previous studies showed that Bt adoption has not led to an increase in farmer suicides [6, 7]. Based on the strong negative association between suicides and yield shown by Gutierrez et al., and the large positive Bt yield effects shown in other studies [3-5], one might rather hypothesize that Bt cotton adoption has reduced farmer suicides in India.

It is obvious that the journal peer-review process for this Gutierrez et al. paper was not sufficiently rigorous to reveal such serious issues. That certain mistakes or problems with a paper are not detected during the review process can happen in individual cases. However, over the last few years, Environmental Sciences Europe has published several papers with methodological flaws that claimed negative health, environmental, or social effects of GM crops. I do not know whether this is due to systematic problems with this journal’s peer-review process or possibly some hidden agenda. In any case, publishing such misleading papers does not serve the purpose of advancing objective science.

Matin Qaim is a Professor of Agricultural Economics at the University of Goettingen in Germany. Follow him on Twitter @MatinQaim