After an arduous process that took more than 25 years from time of conception to commercialization, the GMO salmon was finally marketed to consumers at the end of May when AquaBounty received a purchase order for five metric tons from Samuels and Son Seafood. Commenting on the sale, AquaBounty’s CEO, Sylvia Wulf, said, “We have received positive interest from a variety of customers representing seafood distributors, food service operators and retailers and are thrilled that the first harvest is already fully committed.”

The GMO salmon was developed by inserting genes from a Chinook salmon and an ocean pout into an Atlantic salmon in order to enable it to grow twice as fast as an Atlantic salmon. The amount of feed required to produce the same fish biomass is 25% less for the GM fish than a conventional Atlantic salmon.

The long journey to commercialization reflects the costly labyrinth time consuming bureaucratic process that is involved in approving GE animals of which the GMO Salmon was the first to be approved.

It also reflects the degree and ferocity of the GE opponents who spread falsehoods about the supposed health and environmental dangers of the GM salmon and delayed its commercialization by throwing up legal objections that substantially prolonged the approval process.

The introduction of the GM salmon should not be cause for controversy but instead should be welcomed as genetic engineering has the potential to make the fishing industry more sustainable at a time when worldwide fishing stocks have plunged in response to overfishing and pollution of the seas and are further threatened by global warming. Judging by present trends of worldwide fishing, ocean fish stocks could be depleted by 2050.

A study published in Science examining the impact of rising ocean temperatures on 124 marine species found the amount of fish that could be caught each year without jeopardizing future harvests fell by 4.1% between 1930 and 2010 as a result of climate change. Malin Pinsky of Rutgers University, a co-author of the study, said, “We were stunned to find that fisheries around the world have already responded to ocean warming…These aren’t hypothetical changes sometime in the future.” 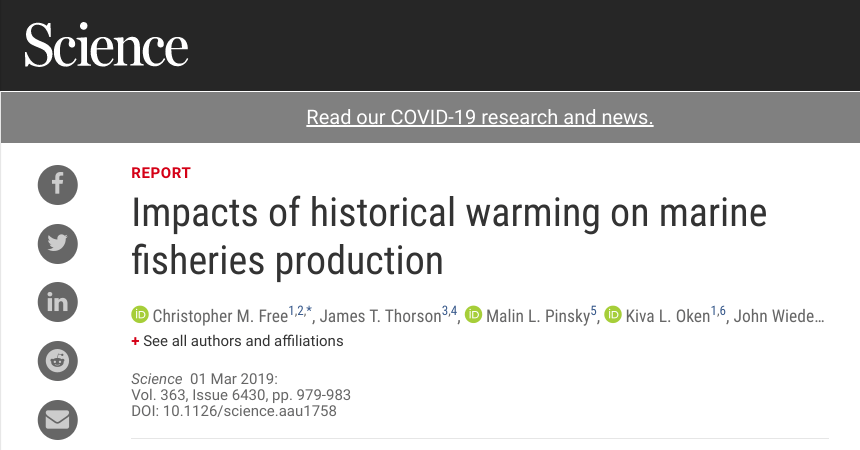 A paper in Nature Reviews Genetics published in 2020 noted, “In the future, technologies such as genome editing could be used to introduce desirable traits, such as disease resistance, into farmed species, and surrogate breeding could be employed to support production of preferred species.”

Building a better fish, with genetics

The prolonged approval process and the vigorous opposition of anti-GMO advocates has not deterred AquaBounty from developing other genetically engineered fish varieties. The company has been working on a genetically engineered tilapia using gene–editing technologies. The fish produces a 70 percent improvement in fillet yield, a 16% increase in growth rate and a 14% improvement in feed conversion ratio. Because it does not contain any transgenic DNA, the fish has been given non-GMO status in Argentina, making it exempt from GMO regulations, and has been approved for sale.

Mark Mirando of the National Institute of Food and Agriculture of the US Department of Agriculture, which is helping to fund the Rhode Island research, said, “The purpose of understanding muscle growth would be, first, to produce that muscle in a more efficient and more sustainable manner, that is to produce more meat for consumption with less input of resources, less energy, less feed, less labor input.”

Toward a healthier aquatic environment

Scientists are investigating whether genetic engineering can be used to revive and save coral reefs that have been bleached white by climate change.  This is especially important for the health of the seas and fishing stocks as coral reefs support around a quarter of all marine life.

Line Bay, a coral geneticist at the Australian Institute of Marine Science, said, genetically engineered corals could make them better to withstand heat and make them resistance to bleaching.  She however conceded the idea could face resistance, like all proposals to release modified organisms in the environment.  But that does not mean it should be shelved.  “The worst thing that we could do is ignore genetic engineering because it’s frightening for some people, and then get 10 or 15 years down the road and realize it’s the only option.”

Researchers at the Norwegian Institute Nofima are investigating whether gene-editing technology can be utilized to build resistance to sea lice in Atlantic salmon.  According to senior researcher Nick Robinson of Nofima, “If we can reveal the differences in the genetic code that cause lice to be attracted to Atlantic salmon…then it may be possible for us to use that information to make Atlantic salmon resistant to sea lice, and have better health.”  Sea lice cost the Norwegian salmon industry $550 million per year.

Nuseed, a subsidiary of Nuseed Ltd. of Australia, received approval in August 2018 from the USDA to start cultivating its GE omega-3 canola. The crop is produced by taking genes from microalgae and inserting them into canola seeds, thereby enabling the plant to make docosahexaenoic acid (DHA), which supports eye health, brain function and may prevent a variety of diseases, including heart disease. This fatty acid is found in the meat of cold-water fish, and Nuseed estimates that one hectare of its canola could provide the omega-3 equivalent of 10,000 kg of wild caught fish. The oil from these genetically modified plants can be used for food and animal feed.

The Rothamsted Research Institute in the UK has partnered with Yield10 Biosences of the US to develop CRISPR-edited Camelina plants that produce oils that closely mimic Omega 3 fish oil.

According to Professor Jonathan Napier of Rothamsted, “incredible progress” has been made in the last two decades in using genetic engineering to produce the Omega 3 fatty acids EPA and DHA from plants. “These successes have really opened people’s eyes to the potential of a sustainable vegan plant derived source of omega 3 fish oils.”

Genetic engineering may be used to make plant based fish substitutes in the same manner that Impossible Burger uses GE to produce one of its key ingredients, heme, which makes the burger “bleed” and taste like real meat.

Genetic engineering of fish can take the pressure off of wild stocks, reduce the carbon emissions of fishing and provide a source of nourishment to a growing world population which is expected to climb from 7.9 billion at present to 9.7 billion in 2050.  It is therefore essential the regulatory process be streamlined so that new GE fish varieties can come to the market more quickly than it took the GM salmon to be approved.  It is also essential that the opponents of genetic engineering cease their vilification and demonization of a technology that can do so much to help feed the world’s growing population by making the fishing industry more sustainable and reduce its carbon footprint.

Related article:  The Three Stooges illustrate why coronavirus-fighting 'antibody cocktails' could help contain the virus well before a vaccine