Greenpeace was formed between 1969-1972 in Canada initially as a nuclear war protest movement and made famous by their anti-whaling industry campaigns. Greenpeace International moved to the Netherlands following the 1998 revocation by Canada Revenue[1] of their charitable status.[2]

(Similarly, in 2018 New Zealand’s government again ruled that Greenpeace was “too political” to merit charitable status in that country[3] and Germany issued similar findings in 2007.[4]) In 2012, Australia’s federal treasurer similarly questioned the organizations legitimacy as a non-profit, charitable, tax-exempt organization.[5]

Today the organization is reported to be a US$300-plus million network of 28 Greenpeace country and regional NGOs operating in 45 countries under the umbrella of Greenpeace International based in Amsterdam. (Note, some reports claim Greenpeace’s combined international campaign expenditures exceed 1 billion Euros.[6])

Greenpeace is a confederation of multiple individual country and regional organizations with varying charters and public reporting requirements based on their locations.

Other Regional Greenpeace NGOs (NOTE: Greenpeace organizations exist in every European and Asian country, and in many countries around the world)

Greenpeace Southeast Asia was the main agent blocking the introduction of GMO virus-resistant papaya into Thailand. The saga is detailed by Sarah Davidson in a journal article ‘Forbidden Fruit: Transgenic Papaya in Thailand’.[7]

Greenpeace Southeast Asia in February 2011 destroyed a trial site of Bt talong (eggplant) at the University of Los Banos in the Philippines[8], although according to ISAAA the plants which were destroyed were the non-transgenic controls.[9]

Greenpeace campaign foci include climate change, GMOs, whaling, “toxic” chemicals, forests and other eco-social issues around the globe. In December 2014, some of its activists faced criminal charges in Peru for desecrating a sacred Incan site with political messages during the UN climate talks in Lima.

This old-line eco-stalwart has a consumers’ shopping guide to avoiding GMOs. It supports a national movement to require labels and other disclosures wherever GMOs are present in the food supply. It engages an international behemoth of a grassroots mailing list wherever and whenever regulatory decisions loom regarding testing or market approval of food crops containing novel genes. In past years Greenpeace has housed a dedicated anti-biotechnology campaign staff in the U.S., at their International Headquarters and via various other country entities. They are currently most active on anti-GMO campaigns in South Asia.

Most observers are familiar with Greenpeace’s tactical toolbox. But what has gone largely unreported is the organization’s trend toward softening the intensity of its anti-GMO rhetoric, especially regarding third-world applications. Most notable is a series of pronouncements from Kumi Naidoo since he became Greenpeace International’s executive director in 2009. Naidoo, a South African, has said that “in view of developments like Golden Rice, Greenpeace must reconsider its position with regard to GMOs. We must make sure not to dismiss new and important developments.”

While it remains to be seen how this relatively new position will serve Greenpeace’s larger, global “sustainable agriculture” campaign, the first crack in the dike provides both a rhetorical weapon for opponents of Greenpeace in North America and a scenario that can make Greenpeace seem far more reasonable abroad. It’s impossible to predict how Greenpeace’s sudden interest in GMO technology will be translated for First World activists, but odds are very little will change as long as anti-science messaging continues to be good for fundraising.

Greenpeace has campaigned consistently against Golden Rice. The website declares: “GE ‘Golden’ rice does not address the underlying causes of VAD, which are mainly poverty and lack of access to a healthy and varied diet. This GE rice is a technological fix that may generate new problems.”[10] Greenpeace scored a major success against Golden Rice in China when it led a press scandal accusing researchers of using Chinese children as ‘guinea pigs’ in a vitamin A trial.[11]

India banned foreign funding of local campaigns after its intelligence agency warned that Greenpeace’s activism was a threat to the local economy. Greenpeace has ties to Vandana Shiva and her organization Navdanya. Shiva has been a consultant to Greenpeace Australia. Shiva has blamed the high cost of GM cotton seeds for the suicides of indebted Indian farmers. Her campaign along with other groups included Greenpeace’s plans to protest genetically modified soy and corn with “crop circles.”

Greenpeace claims to receive no corporate, political or government funding; however, one of their large sources of income is reportedly a percentage of the Dutch Lottery, they have received direct financial support from the EU, benefit from various Green Party political sources in Europe, and received donations from corporate philanthropic arms and sales percentage allocations from “socially responsible” businesses, like Ben & Jerry’s, whose competitors’ products Greenpeace campaigns attack. Greenpeace Brazil also derived income from the sales of their own line of organic products.

In addition to the above noted sources, Greenpeace derives its income from large foundations and individual donors. Their 2008 International office budget was reported to be in excess of 200 million Euros.

While claiming no political influence, Greenpeace has lost their charitable tax exempt status in numerous countries (including Germany, Canada and Australia) for engaging in non-charitable political activities. Their 2006 German budget alone was reported at 40 milion Euros.[6] 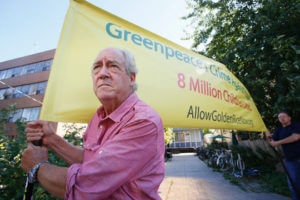 Moore states, “Greenpeace has evolved into an organization of extremism and politically motivated agendas” who run campaigns based on “fear to implement their political agendas.”[15] Moore told Wired Magazine that the term sustainable development is “oxymoronic” to Greenpeace, which along with many in the environmental movement he claims have “dangerous” to society with their “anti-science agenda.”[16]

Greenpeace has come in for strong criticism for its stance on Golden Rice by Patrick Moore, a former Greenpeace founding member and executive director, who fronted an ‘Allow Golden Rice’ campaign targeting Greenpeace offices with banners and media stunts in Europe.[17] There was extensive and positive press coverage of the criticisms against Greenpeace who Moore claims is committing crimes against humanity.[18]

A 2011 Royal Canadian Mounted Police (RCMP) report cited Greenpeace as part of a “a growing radicalized environmentalist faction within Canadian society” adding, “Criminal activity by Greenpeace activists typically consists of trespassing, mischief, and vandalism, and often requires a law enforcement response.” Referring the Greenpeace activities, the RCMP report stated, “Tactics employed by activist groups are intended to intimidate and have the potential to escalate to violence.”[19]

Indonesian lawmakers have accused Greenpeace of illegal activities with the support of foreign donors. “There are reasons to believe that many international NGOs like Greenpeace have been running illegal economic investigations in Indonesia besides their formal missions,” said Desmond Junaidi Mahesa of the Greater Indonesia Movement Party, referring to the organizations’ funding, which mostly comes from foreign donors.[21]

In October 2013 the UK environment secretary Owen Paterson made international headlines when he said that opposition to Golden Rice was “wicked”.[22]

A French journalist under the pen name Olivier Vermont wrote in his book La Face cachée de Greenpeace (“The Hidden Face of Greenpeace”) that he had joined Greenpeace France and had worked there as a secretary. According to Vermont he found misconduct, and continued to find it, from Amsterdam to the International office. Vermont said he found classified documents according to which half of the organization’s €180 million revenue was used for the organization’s salaries and structure. He also accused Greenpeace of having unofficial agreements with polluting companies where the companies paid Greenpeace to keep them from attacking the company’s image.[23] Animal protection magazine Animal People reported in March 1997 that Greenpeace France and Greenpeace International had sued Olivier Vermont and his publisher Albin Michel for issuing “defamatory statements, untruths, distortions of the facts and absurd allegations”.

Writing in Cosmos (magazine), journalist Wilson da Silva reacted to Greenpeace’s destruction of a genetically modified wheat crop in Ginninderra as another sign that the organization has “lost its way” and had degenerated into a “sad, dogmatic, reactionary phalanx of anti-science zealots who care not for evidence, but for publicity”.[24]