The dust has yet to settle more than a week after Michael Pollan’s backhanded attack on Amy Harmon’s New York Times story on the GMOs, “A Race to Save the Orange by Altering Its DNA” — with Tom Philpott, writer for Mother Jones, now coming to Pollan’s defense.

Harmon’s analysis on the efforts by growers and scientists to save Florida oranges from a deadly bacterium received an enormously positive reaction from journalists and scientists; however, the story elicited an odd quote from Pollan, a well-known food writer and skeptic of biotechnology:

This tweet has evoked almost as much social media response as Harmon’s article itself.

“It’s an engrossing, meticulously reported piece on a really complex subject. It should also interest anyone who drinks orange juice. What I marvel at is that Harmon crafted a pitch-perfect narrative that avoids all the land mines of an emotionally and ideologically charged issue.”

Other prominent journalists and scientists—including Bora Zivkovic, an editor at Scientific American; Carl Zimmer, a science writer and New York Times columnist; and Michael Eisen, a University of California-Berkeley biologist—also came to Harmon’s defense, questioning the basis for Pollan’s accusation: 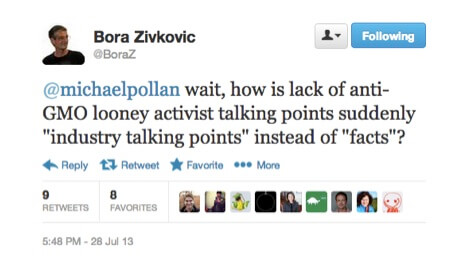 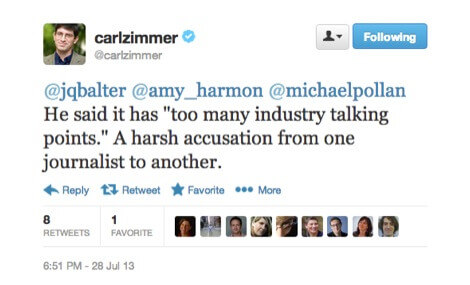 Maggie Koerth-Baker, science editor at Boing Boing and a monthly columnist for the New York Times Magazine, praised Harmon for her careful examination of the risks and rewards of GM foods, as her story took the reader beyond the most volatile points of the GM debate. As Koerth-Baker observed, Monsanto, which Pollan pointedly referenced, is not even involved in the research on oranges.

Primarily scientists and journalists had weighed in. But late last week, the Center for Consumer Freedom (CCF), a conservative advocacy group, took the opportunity to gang up on Pollan on behalf of right wing organizations everywhere.

“He is taking fire from all sides after instigating an all-out Twitter war by putting his anti-corporate agenda ahead of scientific innovation over attempts to save the Florida citrus crop,” the CCF wrote.

While the CCF does not provide any backing for the notion that Pollan has an anti-corporate agenda, Pollan’s remark does not do much to contradict this accusation.

“The ‘2 many industry talking pts’ bit earned him an outpouring of bile from GMO industry defenders,” Philpott  wrote. “But after digging a bit into the citrus-greening problem, I think Pollan’s pithy construction essentially nailed it. Harmon’s story does contain some unchallenged industry talking points….”

What’s his evidence? He cites numerous examples of what he claims appear to be industry talking points. He accuses her of that blindly passing along the established fact that every major independent international science oversight group has endorsed the safety of GMO crops and foods, and instead quotes a well known anti-GMO activist with the Union of Concerned Scientists who dismisses the worldwide mainstream consensus as wrongheaded. He repeats a classic anti-GMO meme, quoting UCS’s dogged anti-GMO activist Doug Gurian-Sherman: “No long-term safety tests in animals are required by any regulatory agency,” which is total cannard–there have been at least 126, by one independent account.

Philpott, who generally holds a skeptical stance on GMO technology, also challenges Harmon’s assertion that GM technologies are considered by scientists as the most viable solution to the bacterium, saying that she did not consider conventional breeding as a possibility. Then he turns around and contradicts himself. “[A]t this point it appears that transgenics may be our best hope of true immunity,” he quotes a scientist who has been doggedly looking for convention solutions. Indeed, the headlines his piece: “In Which I Actually Endorse One Use of GMOs”. So how exactly did Harmon echo an industry talking point?

This is not the first time Pollan has injected himself, bizarrely, into the GM debate. In June Pollan tweeted to his legion of more than 300,000 followers about a study on the purported harmful effects of feeding GM corn to pigs; however, within days after the study was released, the mainstream science community dismembered it. This left Pollan in an embarrassing position of appearing to promote widely discredited research purely because it questioned the safety of GMO foods— raising questions as to whether he is an advocate or just a passionate journalist with poor judgment.