Last week, Mike Adams, the founder and editor of NaturalNews.com–a favorite site of Dr. Oz and anti-GMO campaigners, from Vandana Shiva to Center for Food Safetey’s Andrew Kimbrell to the Food Babe to Jeffrey Smith, but also dubbed by scientists and journalists as the number one anti-science site in cyberspace–launched an all out offensive against crop biotechnology.

Adams posted a screed on his website (this pre-censored post, since sanitized by Adams, has been preserved on the wayback machine archives) attacking supporters of genetic engineering as modern day Nazis, suggesting that anti-GMO activists should consider murdering scientists and journalists for their crimes against humanity. Adams then alerted readers to another site, Monsanto Collaborators, which was more or less a handy online list of these so-called ‘Nazi perpetrators”–aka scientists, journalists and news organizations that believe biotechnology can play a constructive role in farming–for crazies who might want to follow Adams’ marching orders and begin assassinations. I was prominently mentioned by Adams, no doubt because of the scathing Adams profile and fact sheet summary GLP posted in April.

Adams alerted readers to this new “collaborators” site, claiming he had nothing at all to do with it, but urging everyone to read it nonetheless. Not surprisingly, anti-GMO philosopher Vandana Shiva, linked to the Adams story on one of her sites (Shiva took down the incendiary Adams post on July 28, but an archived version of it has been preserved here.)

Needless to say, the last week and Adams’ anti-GMO offensive have not unfolded as Adams had anticipated. Keith Kloor, a science writer with a blog on Discover, has written a series of articles on the Adams fiasco, documenting the train wreck as it unfolded: here, here, and here.

But more interesting is the fact that it’s now clear that Adams was behind the Monsanto Collaborators site. Analyses by the GLP, geneticist Karl Haro von Mogel and most extensively by the website This Week in Pseudo Science have demonstrated that the NaturalNews.com coding signatures–akin to a DNA match–are all over the Monsanto Collaborators site, which was actually registered hours before Adams’ first attack column was published. In sum: Adams has been busted. He published both sites. He’s also launched two other slander and pseudo sites designed to promote himself and his products while trying to hammer critics.

Adams tried to cleanse his original NaturalNews.com post calling for the killing of scientists and journalists and is now blocking access to the Monsanto Collaborators site, which he claims was actually set up by Monsanto and its supporters to discredit him and other anti-GMO activists, but the truth is out and the damage has been done.

The U.S. Federal Bureau of Investigation, besieged by complaints from targets and the science and journalism communities, immediately launched an investigation of Adams and the site, with Adams facing possible felony charges of inciting violence (if he lived in a Europe or a Commonwealth country like the U.K., he would probably already have been served).

As the list of cyber stories on this still developing story, posted below, illustrates, the condemnation of Adams by mainstream journalists and scientists, including Paul Raeburn at Knight Science Journalism Tracker, has been overwhelming. Consensus: Adams is (in the words of scientist and blogger David Gorski) an uber-quack.

The issue here, of course, is not Adams. He is well known for his wildly popular fringe and inflammatory views, as his anti-science web site garners millions of hits every month. The real scandal is that what Adams writes about GMOs, including hyping the long discredited myth that GMOs are causing farmer suicides in India—is standard gruel for even so-called ‘mainstream’ and “responsible” anti-GMO activists.

In other words, Mike Adams is not an outlier in the anti-GMO movement…he is as mainstream as the Institute for Responsible Technology, Center for Food Safety, and sadly, even some environmental publications, on this issue, like Mother Jones. Their positions are grounded in ideology rather than science. That’s the scandal.

Below are the links, including to archived posts that Adams tried to but failed to purge, of the growing Adams dust-up.

Adams’ follow up post on NaturalNews saying he’s not responsible for Collaborators page before he sanitized it: http://web.archive.org/web/20140725133815/http://www.naturalnews.com/046147_Monsanto_Collaborators_false_flag_operation_GMO_skeptics.html

Attack articles on Adams-created propagandists, site, in which Jon Entine listed along with Magic Johnson and others: http://propagandists.org/

Adams sets up two other propaganda sites to promote himself and attack critics: http://newsvoice.se/2014/07/28/mike-adams-starts-naturalwiki-and-truthwiki/ 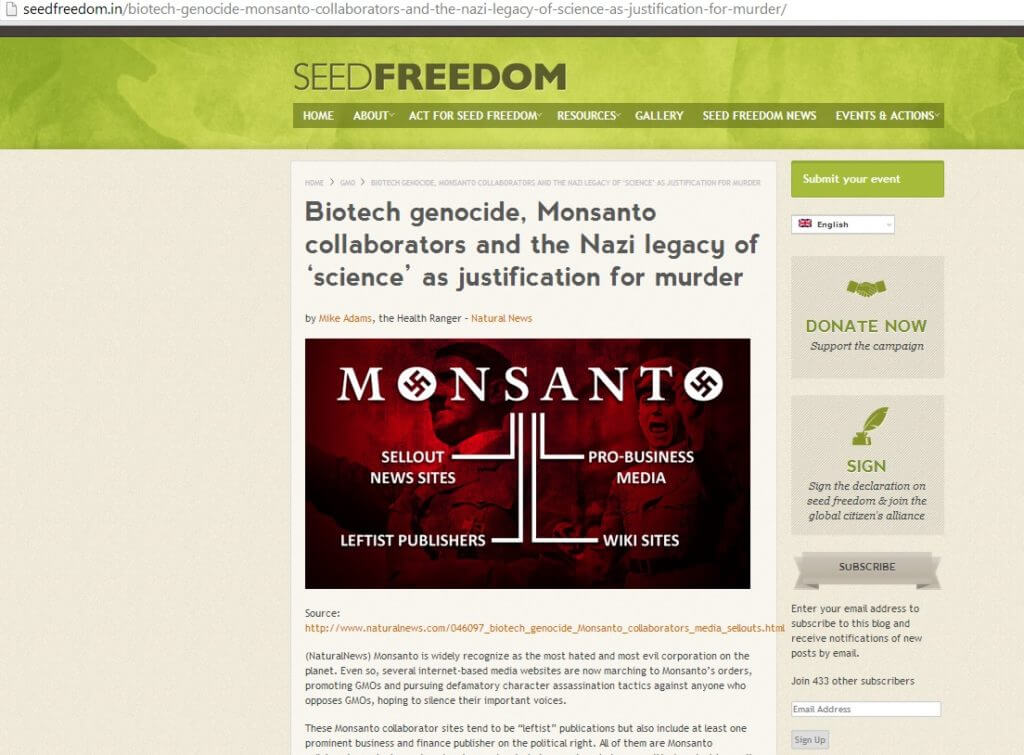 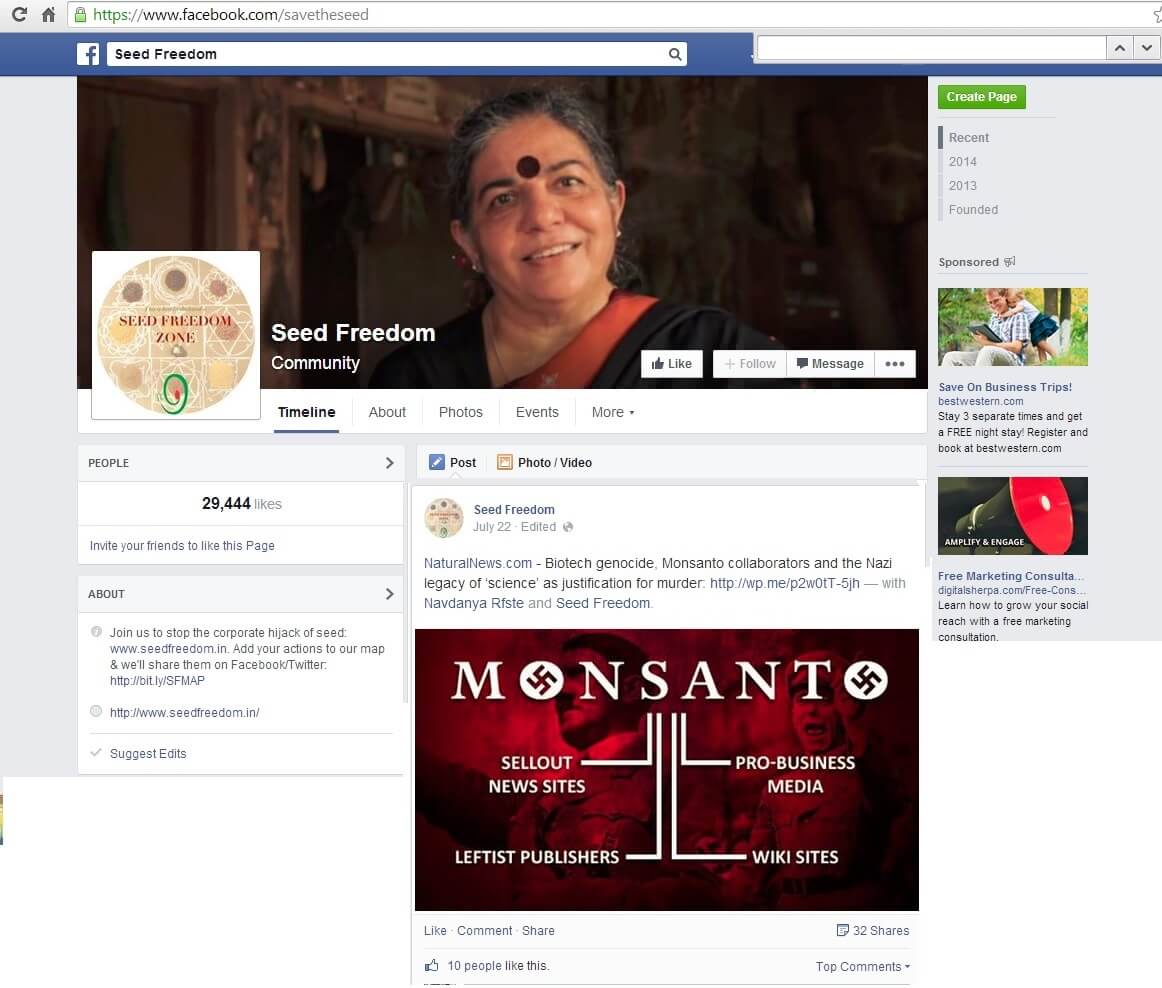 Kevin Folta Illumination blog “Do Not Stop Adams and Intimidation – Exploit It”: http://kfolta.blogspot.com/2014/07/do-not-stop-adams-and-intimidation.html

Forward Progressive after Adams was busted for claiming he had no connection to ‘kill GMO suporters” site: http://www.forwardprogressives.com/natural-news-owner-may-created-fake-holocaust-website-smear-critics/