Our GPS brain: What is the ‘doorway effect’ and how do we orient ourselves

The 2014 Nobel Prize in Physiology or Medicine was just awarded to three neuroscientists for refining some past research and developing some pioneering new results to understand how our brains keep track of where we are spatially. John O’Keefe, a professor of cognitive neuroscience at University College London, May-Britt Moser, and her husband, Edvard Moser, of the Norwegian 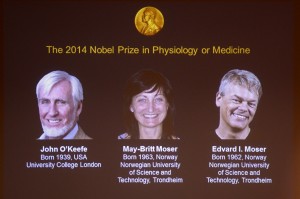 University of Science and Technology in Trondheim will share the Nobel Prize.

Have you ever wondered how you (vis-à-vis your brain) know where you are in the course of a day (e.g., how you know you’re in your office and not a colleague’s)? Your brain houses an extremely precise orchestra of neural firing patterns – one room versus another or one city versus another is the configuration of neuron activation across Pyramidal Place cells and more-recently discovered ‘Grid cells.’

John O’Keefe had one of the first insights and research work to support the idea of these ‘place’ cells about 43 years ago. Certain ‘place’ cells in the hippocampus of rats were activated continuously 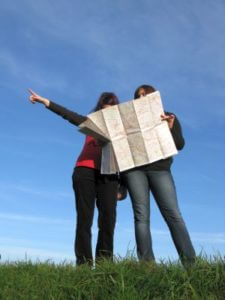 when the rats were in certain sections of a maze, and had different activation elsewhere. In 2005, the Moser team elucidated a different type of neuron involved in spatial placement, called ‘grid’ cells. These were so-named because of their appropriation to a spatial-navigational nature in our cognitive function.

These other placement cells are in the entorhinal cortex (adjacent to the hippocampus) and function differently: They seem (according to the new rat-brain data) to not rely on landscapes and physical-memory layouts, but instead are based on position and relative movement. This perhaps could use yet another layer of neural feedback – the proprioceptive system to determine how much effort is being expended (walking, running, climbing, etc.) and then the brain would develop what the Mosers call a ‘GPS system’ in the brain where the relative position is then inferred based on the movement from the previous location.

This new finding – the ‘grid cells’ – seems to then work in-tandem with the ‘place cells’ to superimpose knowledge (or memory) of the location and environment with what the ‘grid cells’ are suggesting for position. This would then create a map within the brain so it can presume its sense of location. It seems that the activity of place cells actually even may correspond with ‘future’ position (in rats) – in other words that the place cells are suggesting the next destination(s) and then there is navigational activity to get there.

Have you ever wondered why when you’ve had a train of thought and can’t remember where it logically goes next, you might pace back to previous room or space you were in while you were having the thought? This can help jog the recollection of the thought processes, and is so well-recognized that it even has a name in the literature: The doorway effect. I as well as others have done research on the properties of the doorway effect, and it appears to be quite a profound neuroscientific phenomenon: It seems that there is a very robust effect between different firing patterns of Pyramidal Place Cells and the development and recovery of memories.

The elaborate patterns of brain activity that allows you to know where you are is also tied, seemingly inextricably, to certain memories you create. In effect, this is what occurs during what we call the ‘encoding specificity principle’ – that memories created in a particular setting are much more retrievable than those done more generally – that testing will show better results if the testing context is similar to the conditions in-place during the learning. Of course, the diametric process which happens is an effect identified by researchers at the University of Notre Dame – that ‘walking through a doorway induces forgetting.’ One way or another – whether or not walking back to the previous room improves memory retrieval or if crossing through a doorway causes the purge of memories isn’t reliably known, but either way the effect suggests a connection with the place and grid cell networks and their influence on the forming – and volatility – of memories.

Memory – and its effects on location, and further work

Because the hippocampus – the locus of the ‘place cells’ – and the entorhinal cortex (the seat of the ‘grid cells’) are so close together, it seems that their proximity assists in the sharing of information across the two brain structures. This discovery, according to the Nobel committee, “of the brain’s GPS system really represented a paradigm shift in how specialized cells in the brain work together to create complicated thinking abilities.”

Edvard and May-Britt Moser have also commented that there may also be profound implications for Alzheimer’s research. As Alzheimer’s disease is found to occur with amyloid plaques forming in the brain disrupting normal function, one of the first areas affected is near this entorhinal cortex – and interestingly one of the first abilities to be lost is that of a sense of orientation and location – Alzheimer’s patients typically will have trouble with finding things or navigating to places. It could very well be that the obfuscation of the place and grid systems in the brain is at the heart of this disease’s early symptoms.