Scientific consensus on GMO safety stronger than for global warming

A Pew Research Center study on science literacy, undertaken in cooperation with the American Association for the Advancement of Science (AAAS), and released on January 29, contains a blockbuster: In sharp contrast to public skepticism about GMOs, 88% of scientists believe genetically modified foods are safe.

That overwhelming consensus exceeds the percentage of scientists, 87%, who believe global warming is the result of human activity. However, the public appears far more suspicious of scientific claims about GMO safety than they do about the consensus on climate change.

Some 57 percent of Americans say GM foods are unsafe and a startling 67% do not trust scientists, believing they don’t understand the science behind GMOs. Scientists blame poor reporting by mainstream scientists for the trust and literacy gaps.

The survey also contrasts sharply with a statement published earlier this week in a marginal pay-for-play European journal by a group of anti-GMO scientists and activists, including Michael Hansen of the Center for Food Safety, and philosopher Vandana Shiva, claiming, “no scientific consensus on GMO safety.”

A huge literacy gap between scientists and the public on biotechnology is one of the many disturbing nuggets that emerged from the Pew Research Center survey, which was conducted in cooperation with the AAAS, the world’s largest independent general scientific society. The full study, released on January 29, is available here.

This survey, the first of several reports to be released in coming months, compares the views of scientists and the general public on the role of science in the United States and globally.

The eye opening take-away: The American population in general borders on scientific illiteracy. The gap between what scientists believe, grounded on empirical evidence, often sharply differs from what the general public thinks is true. The differences are sharpest over biomedical research, including GMOs. 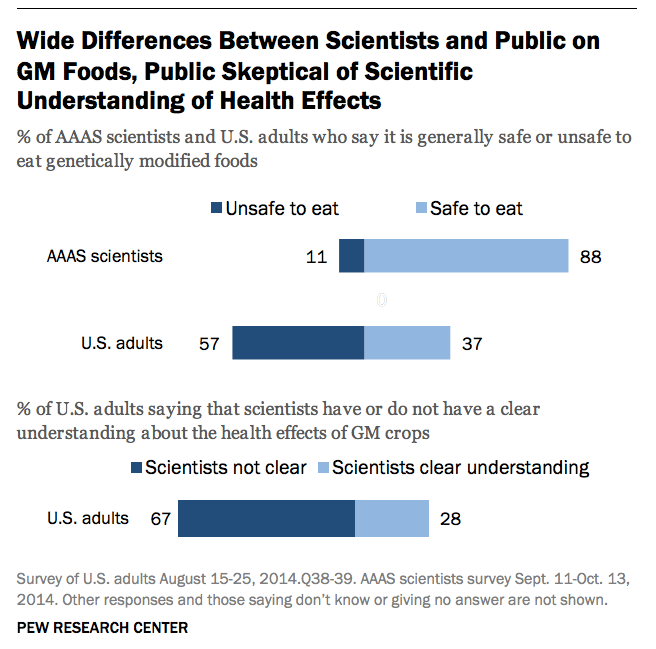 The scientist/public gap is less pronounced over climate, energy and space issues. 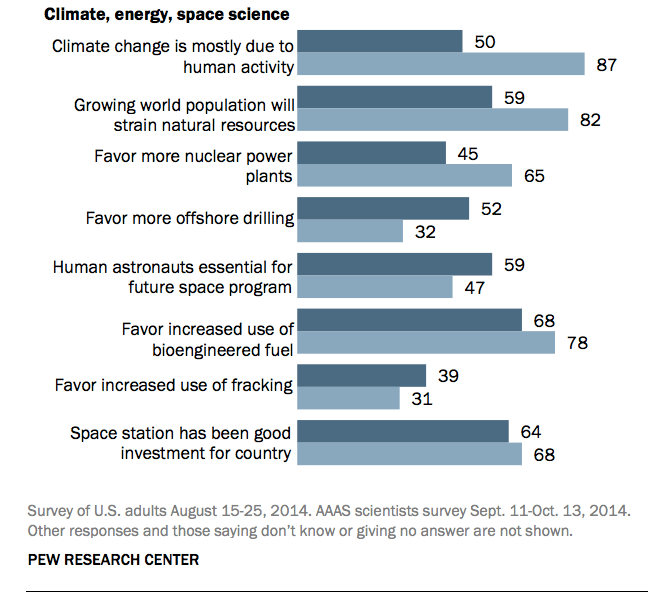 The survey represents a sample of 2,002 adult citizens and 3,748 scientists who are all members of the AAAS.

“As scientists size up the culture and their place in it,” Pew said in a statement. “Scientists are notably less upbeat than they were five years ago and express serious concerns about public knowledge of science and the way scientific findings are covered by journalists.”

The scientists believe that media hype is one possible reason for large gaps in opinion between their views and that of the public, particularly in the debate over GMOs. Seventy-nine percent of scientists said that the media doesn’t distinguish between “well-founded” and “not well-founded” scientific research. Additionally, 52 percent agreed that the media oversimplifies the science.

Three years ago, the AAAS released an unequivocal statement on the safety of GM foods and why a consensus of its members oppose mandatory labelling:

There are several current efforts to require labeling of foods containing products derived from genetically modified crop plants, commonly known as GM crops or GMOs. These efforts are not driven by evidence that GM foods are actually dangerous. Indeed, the science is quite clear: crop improvement by the modern molecular techniques of biotechnology is safe. Rather, these initiatives are driven by a variety of factors, ranging from the persistent perception that such foods are somehow “unnatural” and potentially dangerous to the desire to gain competitive advantage by legislating attachment of a label meant to alarm. Another misconception used as a rationale for labeling is that GM crops are untested.

The AAAS also has addressed claims by anti-GMO advocacy groups, frequently echoed in the media and on activist websites, that GM foods are less tested or nutritionally deficient when compared to organic or other conventional foods.

… contrary to popular misconceptions, GM crops are the most extensively tested crops ever added to our food supply. There are occasional claims that feeding GM foods to animals causes aberrations ranging from digestive disorders, to sterility, tumors and premature death. Although such claims are often sensationalized and receive a great deal of media attention, none have stood up to rigorous scientific scrutiny. Indeed, a recent review of a dozen well-designed long-term animal feeding studies comparing GM and non-GM potatoes, soy, rice, corn and triticale found that the GM and their non-GM counterparts are nutritionally equivalent.

Looking further at the demographics of respondents, the survey finds that those with a college degree are split on GMO safety: 49% say it’s generally safe while 47% say it’s generally unsafe. Women are more wary than men: only 28% of women think eating GM foods are safe compared to 47% of men. Race also divides the issue with blacks (24% say its safe) and Hispanics (32%) being more cautious than whites (41%).

Related article:  To label or not to label? The California GMO labeling initiative gears up for the big vote 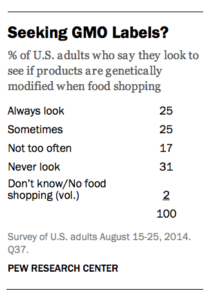 When it comes to GM labeling, exactly half of respondents said they “always” or “sometimes” check for a non-GMO label when they are shopping. Of course, those who check labels correlate higher with those who think genetically modified foods are unsafe to eat

So why are citizens so out of step with scientists on GMO safety?

“One possible reason for the gap: when it comes to GM crops, two-thirds of the public say scientists do not have a clear understanding about the health effects,” surmised the researchers.

Pew also asked scientists another question: How good is the general state of science is today? Scientists were more negative this year than they were in 2009. Only 52% say that it is a good time for 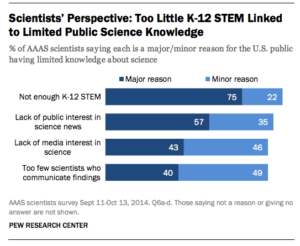 And due to the public perception of GMOs at least, scientists’ more sober assessment might make sense.

Who’s to blame? Scientists (75%) say lack of STEM education in grades K-12 is the biggest culprit. The release of the next report is expected in mid-February.

How can scientists and the government bridge the disturbing literacy gap between the mainstream scientific community and a skeptical public? asks Alan Leshner, CEO of the AAAS, in an editorial accompanying the survey release?

Speaking up for the importance of science to society is our only hope, and scientists must not shy away from engaging with the public, even on the most polarizing science-based topics. Scientists need to speak clearly with journalists who provide a great vehicle for translating the nature and implications of their work. Scientists should also meet with members of the public and discuss what makes each side uncomfortable. In these situations, scientists must respond forthrightly to public concerns. In other words, there needs to be a conversation, not a lecture. The public’s perceptions of scientists’ expertise and trustworthiness are very important but they are not enough. Acceptance of scientific facts is not based solely on comprehension levels. It can be compromised anytime information confronts people’s personal, religious, or political views, and whenever scientific facts provoke fear or make people feel that they have no control over a situation. The only recourse is to have genuine, respectful dialogues with people.