In the battle surrounding GMO labeling, 2014 was a huge year. A measure was narrowly defeated in Oregon — and one resoundingly in Colorado — that would have required food makers to disclose if GMOs were included in the products they offer. But while all of the money and media attention has been turned toward whether or not the inclusion of GMOs should be highlighted, a different group that focuses on the exclusion of GMOs saw a rapid increase in sales of products it certified.

This could provide an interesting middle ground where those who want such GMO labeling information can still get it, but without any government mandates.

Started in 2005 by The Natural Grocery Company in Berkeley, California and The Big Carrot Natural Food Market in Toronto, the Non-GMO Project is a non-profit that functions as the only third-party verification in North America for products that are grown conventionally (non-organically), but without the inclusion of genetically modified organisms (officially, less than 1% of the ingredients can be GMO). 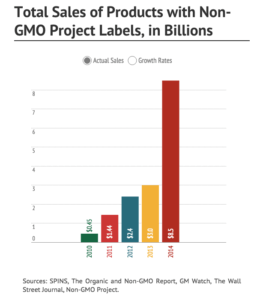 The Non-GMO label itself has only been available since 2010, as the organization spent the first five years doing the necessary research and groundwork to become the gold standard in non-GMO labeling. As you can see, since then, the sales of products with the Non-GMO label have absolutely exploded.

While the growth of participation in the program was impressive before 2014, it absolutely exploded last year. David Carter, general manager at Food Chain ID — a company that helps the Non-GMO Project certify ingredients, said, “The demand is now very, very high and it has been for probably over a year in particular.”

Read full, original article: GMO Labeling: These Numbers Will Astound You
The GLP Needs Your Help
It is easier than ever for advocacy groups to spread disinformation on pressing science issues, such as the ongoing coronavirus pandemic. No, vaccines are not harmful. Yes, the use of biotechnology, GMOs or gene editing to develop antigens for treatments including vaccines are part of the solution. To inform the public about what’s really going on, we present the facts and challenge those who don't. We can’t do this work without your help. Please support us – a donation of as little as $10 a month helps support our vital myth-busting efforts.
DONATE
Share via