The gene editing revolution, headlined by the invention of CRISPR-Cas9 three years ago, has the potential to put to rest one of the favorite demonization tools of the anti-GMO camp: the use of the term “Frankenfood”. It was coined to encapsulate one of their central complaints: transgenics led to the creation of new crops or animals by moving so-called “foreign genes” from one species to another. You know, pictures of tomatoes with fish bodies and children threatened by marauding vegetables. 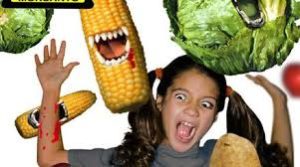 “Plants and organisms unable to physically reproduce can become unnaturally intertwined,” reads a typical scare NGO posting headlined “Frankenfood=Genetically Modified Food”. “A novel gene may be cobbled together from a plant virus, a soil bacterium and a petunia plant, for example—creating a kind of botanical Frankenstein.”

Gene editing and other new generation genetic engineering tools allow scientists to slice, snip and splice an organism’s DNA without adding any genetic material from different species. The Arctic Apple used a technique called gene silencing to turn down the expression of an enzyme that causes browning. Simplot’s Innate potato, which has fewer black spots and almost eliminates potentially hazardous acrylamide, was created by editing in genes from a wild potato species that silenced the expression of undesirable traits.

But even as a major technological shift is transforming agricultural and biomedical engineering, vestigial Frankenstein imagery still lingers, making guest appearances at protest marches and littering websites. That will likely persist as most GMO products marketed today–herbicide tolerant and insect resistant corn, soybean and cotton—are the result of transgenics. And GMO critics continue to make a case that we have risked ecological disaster by inserting “foreign genes” into crops—a violation of the order of Nature, they claim.

Among scientists, even the use of the term “foreign genes” is controversial. There was a time—just a few decades ago—when scientists believed genes were fixed and evolution was linear. Standard theory of natural selection did not account for the possibility of complex organisms suddenly acquiring genes from other species.

But that model began collapsing in the 1970s, when transposons, colloquially known as ‘jumping genes’ were discovered. It was found that as much as 85 percent of the corn genome and half of the human one is composed of genes that moved from one location to another. The jump was usually “within species’ but not all the time. Scientists called this “horizontal” gene transfer, to distinguish it from the “vertical” gene transfer which grounds the theory of evolution. At first scientists thought such events were rare and certainly not applicable to humans. Now?

“It seems our own genome is a patchwork of raw genetic material coming from different places with different histories,” Cedric Feschotte, a University of Utah geneticist, told Ferris Jabr in an article for Aeon.

Horizontal gene transfer “is far more pervasive and more radical in its consequences than we could have guessed just a decade ago,” agreed W. Ford Doolittle, a biochemist at Dalhousie University in Nova Scotia.

The how concept of ‘foreign genes’ seems more and more absurd with each passing year. Earlier this year, Cambridge (UK) scientists, Alistair Crisp and Chiara Boschetti, writing in Genome Biology, identified 145 genes in humans that have crossed the (quite permeable) species “barrier.” Our ABO blood group system appears to have been inherited from bacteria, for example. The scientists concluded that horizontal gene transfer is a hallmark of both vertebrate and invertebrate genomes.

The total number of imported genes represents only a tiny fraction of our 20,000 or so genes, a transfer of one every 4 million years or so, so it’s not an every millennial occurrence. The research is still new and many more such examples of likely to be identified, but it’s clear that humans are a mash-up of DNA from bacteria fungi, algae and many other cousins, distant and recent.

Some added nuanced was put on these findings earlier this month with the publication of a study that indicates that the amino acid sequences of humans and yeast overlap by an astounding 32 percent. The scientists injected human genes into yeast cells and found out they functioned just fine in hundreds of cases.

“It’s quite amazing,” said evolutionary biologist Matthew Hahn of Indiana University, Bloomington, who wasn’t connected to the study. “It means that the same genes can carry out the same functions after 1 billion years of divergence.”

“It beautifully illustrates the common heritage of living things,” said systems biologist Edward Marcotte of the University of Texas, Austin.

This common heritage—shared among eukaryotic organisms, including humans, and prokaryotes, like fungi, helps explain how genetically engineered transgenic crops or animals can safely express foreign genes: the genetic code is similar across all life forms. This means that a specific DNA sequence will code for the same protein in all organisms. This likely means that comparable genes in different organisms have closely related functions.

Due to this similarity in protein sequences, scientists can cut DNA at common protein points and add other genes—the essence of transgenic agriculture. This not a ‘crime against nature’. Nature, it appears, doesn’t have much respect for so-called species barriers.

The knowledge of horizontal gene transfers was barely understood when GMOs were introduced and the Frankenfood myths were hatched. Knowing what we know now about the promiscuousness of genes in the real world, it’s hard to get worked up about a natural bacterial protein engineered into soybeans that repels insects or an herbicide resistant gene in corn—at least if science matters.