This is the latest in a series of GLP reports on The Real Facts About the Birds and the Bees.

It doesn’t take a peer-reviewed study to tell you that if you blot out the sun, plants won’t grow and solar panels are going to stop functioning. Or if a mammoth asteroid unexpectedly hit the earth tomorrow, it would cause enormous destruction. Or if… you get the point.

Doomsday scenarios are great as sci-fi pulp or to bolster ideological campaigns, but such musings offer no practical or public policy value, to science or to the general public. Outside of the realm of cartoon fantasy, the sun is not going to rise tomorrow and an asteroid is not going to smash into the earth.

So it is with a paper published earlier this month in The Lancet—“Effects of decreases of animal pollinators on human nutrition and global health: a modelling analysis”. It’s conclusion: “Declines in animal pollinators could cause significant global health burdens from both non-communicable diseases and micronutrient deficiencies.” Or translated into English: if all pollinators, including all birds and bees, were blotted out tomorrow, it would be a bad thing for agricultural productivity. Duh! You didn’t need to assemble a team of Harvard School of Public Health and Tufts University environment and public health professors to tell you that.

Of course, the point of this paper wasn’t to explore an actual imminent catastrophic threat. It doesn’t analyze the current state of bee health, as it states wrongly that bees face an imminent threat to their existence and are in decline because the facts don’t support that. So, what was the point, if any, of what amounts to an exercise in modeling scare mongering?

According to the researchers, the extinction of all animal pollinators would cut global fruit supplies by 22.9 percent, vegetables by 16.3 percent and nuts and seeds by 22.1 percent. The analysis claims the resulting drop in nutrition would kill 1.42 million people.

The paper introduces its case with bold-faced deception, implying that managed and wild bee populations are in sharp “decline” and their demise is a realistic possibility.

In the past decade, worldwide decreases in the number, range, and species diversity of both wild and managed animal pollinators have been well documented. Since 2006, managed honey bee colonies in the USA have seen sustained and significant annual winter colony losses at around 30 percent, while Europe has seen smaller but substantial losses (15 percent).

First, 2006 was a political choice to make to begin the analysis. Why? That was the year of the much reported incident of Colony Collapse Disorder (CCD), a phenomenon mostly confined to California, which led to a sharp one-year decline in bees and beehives. CCD has occurred periodically over the years with documented reports going back to the 1800s and there are no links to pesticides—the apparent target of this current study.

The authors mention “winter colony losses” to support their premise that countries around the world are experiencing “decreases in the number” of bees, when the opposite is true. When honeybees die during a harsh winter, beekeepers can split the hive and grow more honeybees. So the level of overwinter losses is a separate question from the overall population of honeybees. 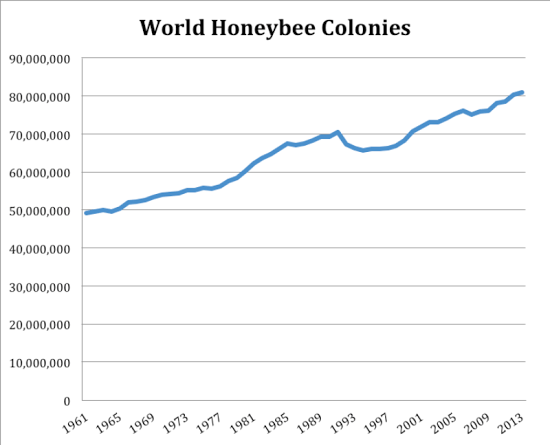 As for wild bees, a study published in the journal Nature Communications in June found wild bees are thriving: “the species that are the dominant crop pollinators are the most widespread and abundant species in agricultural landscapes in general.”

For more background, read this analysis by GLP’s Jon Entine. Once you get past the editorial elisions on the first page, the Lancet study throws in a giant caveat about its claimed findings.

We made no assumptions about human adaptation to pollinator-related food or nutrient losses (eg, use of alternative modes of pollination, dietary or crop variety substitution, nutrient supplementation, increased imports of affected foods) because of the high uncertainty and country-specific variability associated with each possible intervention.

In other words, the scare headlines about millions dying wouldn’t actually come true because farmers would grow different crops, and food manufacturers would adjust their recipes to match availability. Human beings are very good at adapting to difficult circumstances.

Let’s assume for the sake of argument, though, that the Lancet study gets everything right and all pollinators disappear overnight. How bad is a 22 percent reduction in crop production? Many of the same activists who (falsely) claim that pollinators are in decline also demand that we shift from conventional agriculture to supposedly “bee friendlier” organic farming.

Except that switching to organic farming could result in a huge reduction in output—an average 34 percent according to a report in Nature, and it wouldn’t necessarily be any friendlier to bees. When it comes to bashing modern fertilizers, pesticides and other techniques, activists never raise any concerns about the impact on production.

The study also claims there would be sizable increases in illnesses and deaths as a result of Vitamin A deficiency. But conventional agriculture has a solution: Vitamin-A fortified Golden Rice. You don’t need bees to pollinate rice—the wind gets the job done, so it would go a long way to taking care of the problem even in a doomsday bee-less world. All the same, this solution isn’t palatable to first-world activists who oppose Golden Rice because it is genetically engineered.