The seed market in Europe contains nearly 7,200 seed companies, totaling more than 50,000 employees and accounts for 20 percent of the total production of oil from crops such as sunflower seeds, maize, and rape seeds. France, Netherlands and Germany are three of the top four seed exporters in the world and will play a key role in sustaining Europe’s seed market growth. 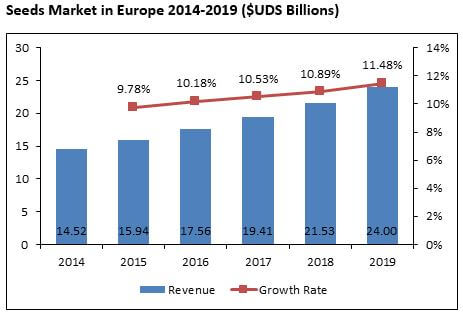 Technavio analysts expect the seeds market in Europe to grow during the period 2014-2019 reaching a value of $24 billion, nearly $10 billion more than its current $14.52 billion value. Increased demand for good quality high-performing genetically engineered and hybrid seeds by farmers and rising demand for biofuels in Europe are two of the key drivers for the forecast period.

The GLP aggregated and excerpted this blog/article to reflect the diversity of news, opinion and analysis. Read full, original post: Europe is the King of Seed Exports: Market to Increase Almost $10 Billion by 2019