Last week the world learned the details of the Islamic State’s systemic rape and slavery of women. The stories the women shared with New York Times reporters were shocking and rightly so. Our collective outrage also showed how war has changed so much. Rape, torture and slavery are considered beyond taboo; they are criminalized even in war. This archaic behavior is not supposed to happen in our modern world.

But that’s a pretty recent development. Systemic rape used to go hand in hand with war as women and resources lands were assimilated into the victors’ communities. Those men had more children, more land and more power. Some researchers have argued that this is proof of the ‘deep roots theory of war:’ human males fight each other for reproductive advantage proving that war is an evolutionary advantageous behavior.

But this theory has been hard to prove. In fact, studies of human groups and other primates have added to the evidence both for and against the controversial idea that humans were made for war, evolutionarily speaking. A new study indicates that societies don’t actually benefit from head-to-head action, but other forms of violence pay off. 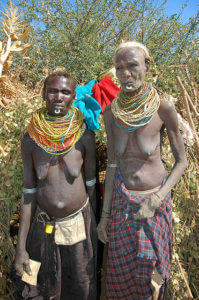 Harvard evolutionary biologists Luke Glowaki and Richard Wrangham studied the Nyangatom people of East Africa. The group are polygamous shepherds who raise small livestock and can have multiple wives. At times, the Nyangatom go to war with other groups. But there is a another pervasive and nearly constant form of violence in the group. Young riders make raids on nearby camps with the goal of stealing cattle. Glowaki and Wrangham asked if either or both of these types of violence was beneficial to the men who engaged. They measured by counting the the number of wives and kids they had.

This study is one of many that has heightened the debate over how much war has had an impact on a warrior’s evolutionary success. At least in this society, sneaking around after dark and stealing cows may have been more consequential. Robert Sapolosky at the Wall Street Journal explains:

By contrast, lots of “battle raiding”—open-field, daytime combat with hundreds of participants—did not serve as a predictor of elevated reproductive success, probably because such fighting carried a nontrivial chance of winding up dead. In other words, in this society, being a warrior on steroids did not predict reproductive success; being a low-down sneaky varmint of a cattle rustler did.

But researchers only discovered this by looking at the elders in the community. Stealthy animal raiding did lead to better outcomes—but decades later. In Nyangatom culture, most of the stolen livestock goes to fathers and other paternal relatives rather than being kept by the young men themselves. The male heads of families made marriage decisions for their younger relatives. So, while it this kind of violence makes a difference, the payoff is quite delayed. The researchers speculated the cattle-rustling effect would be stronger in a group where the raiders got to keep the livestock they stole and incentives were strengthened.

Other studies also point to the idea that inter-group warfare might not be beneficial but intra-group violence is. Chimpanzee tribes, for example don’t often go to war with other tribes. Instead the most common types of violence involve a group of males ganging up on one individual male. This often happens when conditions are crowded or there were increased numbers of males in the tribe. And the researchers found that chimps’ participation in violence happened outside of the spheres of human influence, meaning violence was not a behavior the chimpanzees learned from us.

Related article:  How the quest to bake a better banana bread helps us understand GMOs

But other evidence suggests that humans likely didn’t participate in war as we know it until relatively recently. A 2013 survey of killings in 21 groups (foragers rather than shepherds) found that group warfare was rare compared to homicide. John Horgan categorized the evidence at Scientific American:

Some other points of interest: 96 percent of the killers were male. No surprise there. But some readers may be surprised that only two out of 148 killings stemmed from a fight over “resources,” such as a hunting ground, water hole or fruit tree. Nine episodes of lethal aggression involved husbands killing wives; three involved “execution” of an individual in a group by other members of the group; seven involved execution of “outsiders,” such as colonizers or missionaries. Most of the killings stemmed from what Fry and Soderberg categorize as “miscellaneous personal disputes,” involving jealousy, theft, insults and so on. The most common specific cause of deadly violence—involving either single or multiple perpetrators–was revenge for a previous attack. So it maybe that a proclivity for violence and an innate sense of revenge that perpetuates war, rather than war itself.

Another factor to consider is that while our common ancestors lived in groups like these thousands of years ago, almost no one does anymore. In fact, finding these undisturbed cultures is hard to do. Having more cows doesn’t carry the same appeal it once did. Its unlikely stealing your neighbor’s TV for your uncle will fetch you a better bride. Some scientists worry that if we accept violence was a beneficial tool for our ancestors, it somehow overturns the societal progress that has moved us beyond rape and pillage culture to something still imperfect, but largely more peaceful.

This is the biggest struggle with the ‘deep roots’ theory of human violence. Just because something garnered an advantage thousands of years ago doesn’t make it okay today. Harvard psychologist Steven Pinker, who has written a book on human violence, said in the Boston Globe:

…romantics worry that if violence is a Darwinian adaptation, that must mean that it is good, or that it’s futile to work for peace, because humans have an innate thirst for blood that has to be periodically slaked. Needless to say, I think all this is profoundly wrongheaded.

Violence may be an inherent part of human nature, but war might just be a bad idea.