Should GMO drugs be perceived differently than GMO food?

Should GMO drugs be perceived differently than transgenic food? Some anti-GMO activists say, ‘no,’ that anything derived from genetic modification should be rejected.

It’s abundantly clear that there is widespread support of transgenic healthcare therapies but far less so for genetic engineering in agriculture. As I’ve noted previously, public perception is divided on issues when emotion crowds the discussion. In cases where there is little patience for science to help the public decide, there tends to be almost no ambivalence in choosing a side. We have the so-called ‘bimodal distribution of public opinion’ where there are two sides, and not many in the middle. We see this not only in headlines but in pictures. 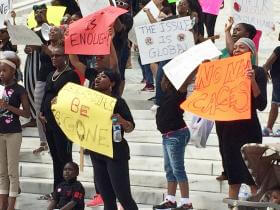 One example supporting this hypothesis can be found in the news explosion around the Ebola treatment, ZMapp, and its place in public perception compared with transgenic food. There was a global outcry to rush treatments (ZMapp in particular) to the market. Even the World Health Organization (WHO) gave support to fast-track it without the usual safety or efficacy tests having been completed, for example, as reflected in this headline: 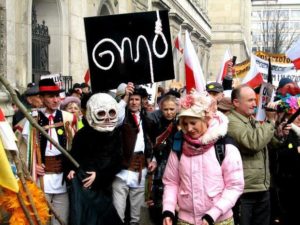 ey are determined to slow or even stop genetically-modified food from being further refined and developed. The venom against genetic modification is so strong that some supposedly mainstream anti-GMO activists–the Organic Consumers Association–even campaigned against the GMO Ebola drug on the grounds that the outbreak should have been addressed with “natural” treatments. Why this disconnect from science?

It seems the critical attribute is how far on the emotional see-saw one wants to be on the side of drug therapies versus food sources. In fact, to help clarify the situation for any reader, it should be noted that this is a bivariate problem (meaning there are opinions on both factors–GM foods and GM health therapies, and they don’t necessarily match–even from the same person), and so I have developed the matrix below to cover the possibilities in opinions: 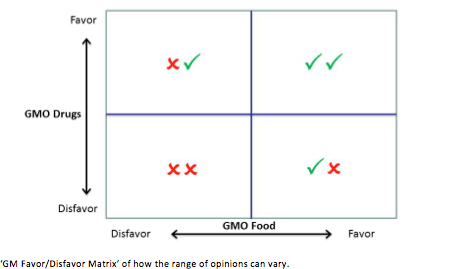 On the x-axis is, moving from left to right, disfavor or favor of genetically-modified crops and food supplies; On the y-axis, moving from bottom to top, disfavor or favor of genetically-modified organisms (plants, bacterial, mammalian cells, etc.) for use in drug therapies for diseases. The bottom left quadrant represents disfavor of GM crops and GM drug therapies, and the top right represents favor of GM crops and GM drug therapies. In this two-way table, both polar decisions (no/no and yes/yes), and everything in-between (yes/no, no/yes) can be looked at to ask the following question:

What separates the decision to favor or disfavor?

Principally, there must be some distinction in the opinion-holders’ minds about why they are making the choices that they are. In consumer research, we call this anchoring, because it establishes the baseline stance from which all decisions about the topic use as a point of reference. For example, if it’s ok to be in the ‘top-left’ quadrant (favor GM therapies, disfavor GM food), why? It must be about how we decide.

We make decisions all the time about where to eat, what to eat, whether or not to take vitamins, how much to sleep, how often to drive, and what to do about our healthcare. Each of these is a decision founded in our individual assessments of risk and risk-based decision-making. For example, in his book Do You Believe in Magic, Paul Offit, M.D. references the research underpinning echinacea; $130 million is spent on this herb in the United States every year for consumers hoping to bolster their health with it. But it is all a game of perception – After all was said and done studying echinacea, John Taylor and his team at the University of Washington in Seattle studied over 400 children with colds and gave half the group echinacea and half the group placebo. There was no difference in any measures of health or cold duration; The only difference was that the children in the echinacea group were more likely to develop a rash.

Another phenomenon to mention here is the ‘hot-hand fallacy,’ another place where human decision-making is (very) fallible: A majority of the population believes in winning ‘streaks’ and the ‘hot-hand’ when it comes to games of chance and sporting events (for example, that a casino table is ‘hot’ for a short time, or that a particular favorite player is more likely to score if he or she has just scored). However, the research tells a different tale – one of the population’s inability to accurately appraise random chance without finding patterns which don’t really exist (which Michael Shermer has called ‘patternicity’).

So not only do we often make decisions not based in grounded science or logic, but we’ll often choose one alternative over another for emotional reasons. The salient point here, though, is that a majority of the public favors transgenic technology to be used for therapies such as ZMapp to stem the Ebola crisis, and it seems that this includes a portion of overlap from those who otherwise reject the idea of GM foods. It seems then that this is an example of a risk-based decision, where the therapy for the emergent disease (acute treatment for Ebola) seems to present much greater benefit-to-risk than crops and foods which are modified to better meet certain demands (where maybe the benefit-to-risk profile seems less clear). 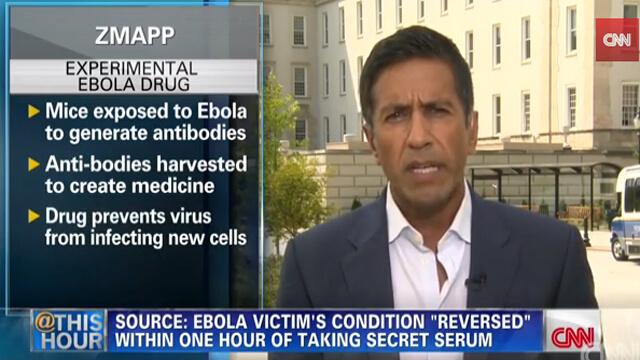 Let’s be clear: This is no ‘secret serum’—it’s an experimental therapy and its effects are similar to other antibodies already on the market.

If we look at some of the principal technologies used for transgenic plants for antibody therapies, we would see that they are the same technologies used in agriculture to modify food-based crops or animal products.

There are two major methods of inserting DNA into plants to have them produce disease treatment therapies. The first is by ballistic introduction of DNA into the plant: Metal particles are coated with the requisite DNA for transgenesis, then the plants are bombarded by these particles. The particles are halted mid-stream and the DNA is carried by its inertia into the plant cells, where it is incorporated by the plant cells and then replicated.

The other method is by taking advantage of highly-effective pathways Nature herself has already perfected for incorporating genetic material into plants: By specific viral targeting. In this way, viruses are used which are natural pathogens of the target plant, and insert copies of the requisite genome into the plant either directly, or often by infecting an intermediary microbe which then uses its DNA-splicing expertise to insert the genetic material into the plant. This occurs naturally in countless situations, including the tobacco mosaic virus (which is commonly used for the DNA splicing), agrobacterium—which is well-known for transferring DNA between itself and plants (causing crown gall disease), and so forth. 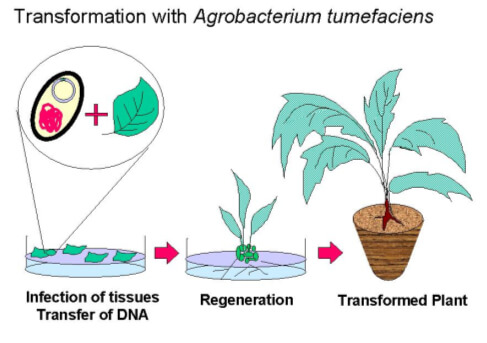 In fact, much of what we know about gene transfer and certain modes of viral function are due to studying the palette which Nature has provided us. Tobacco plants are commonly used for these research therapies because their biology is well-known, they’re well-characterized, and they grow quickly.

Since I’ve addressed the ZMapp therapy and public perception to some degree, I’ll mention also how that therapy is refined for use: Three ‘humanized’ mouse antibodies are used (in the Ebola treatment specifically); Because mice are mammals, they can produce antibodies similar to what we humans produce. However, because it’s still a ‘non-human’ immune system producing them, there can be some rare adverse reactions to these, especially if used long-term for chronic therapy. In these cases, they ‘humanize’ the antibody by modifying the structure to even more closely match what we would make. This makes it more suitable for longer-term administration. These antibodies are targeted specifically to match only the target disease (in this case, the Ebola virus); they are so specific, that each antibody fits its target like a key to a specific lock. Antibody therapies such as this have had a tremendous track record of success treating very difficult diseases and those unresponsive to other therapies.

So far, the only drug treatment generated by genetically-modified plants (as opposed to bacteria or mammalian cells) which has been approved for use by the FDA is Elelyso (using a novel vector with carrot cells), used to treat Gaucher’s disease – a rare disorder where lipids accumulate in cells and body organs, leading to failure and systemic disease. 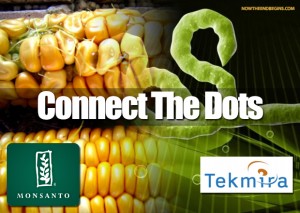 Despite the claims by extremists on the anti-GMO fringe, there is little difference in the technologies or principles between GM foods and GM drugs. Handled wisely, genetic engineering can yield powerful advances for society. It seems that the measure of agreeableness of a paradigm is related to how well it suits current or emergent needs. And we can always check ourselves to see where we fit on the opinion matrix.