Am I hurting my child feeding him GMOs? From mommy guilt to mommy outrage

Things were downright challenging when I brought my new baby home from the hospital. With those challenges came guilt; lots and lots of guilt. Guilt about struggling with breastfeeding, guilt about creating cognitive development opportunity, and guilt about wanting more sleep. However, with time things calmed down, we found a routine and the guilt at last began to wane.

Then the introduction of solid food came along and screwed up everything.

Cooking has always been therapeutic for me. So it seemed only natural to prepare all baby food at home, from scratch. I bought a baby blender and a stack of cook books explaining the finer points of steaming and pureeing. I found the instructions wildly helpful, but the proselytizing downright abhorrent. It’s a popular ideology today that organic food is safer and every author felt the need to wax poetic about the importance of buying and feeding your child organic food.

Bombarded with “Organic or Illness”

It started with the blender. My Baby Bullet came with The Pocket Nutritionist, which included a list of “which foods should be organic”. Lisa Barrangou, who holds a doctorate in food science, was even more misleading by denoting, using clever little icons, when “organic is necessary.” Yes, necessary. Other books I had picked up at least stated it is not a requirement, but a choice.

The book Feeding Baby noted, “some health professionals say that eating organic is a lifestyle, but I believe it is a choice”. “There is growing evidence that synthetic chemicals used in conventional food production have a negative impact on fetuses, infants, and children,” it lectured me, citing everything from brain damage to autism and eczema.

Real Baby Food outlined how going organic is a “personal decision based on priorities and budget”. But that refreshing feeling of choice quickly soured when details and scary figures in the book made it clear if you don’t buy organic, you’ve made the wrong choice.

While most research has shown that the pesticide level in conventional food is safe, many new parents choose to err on the side of caution and buy organic, especially since chemical pesticides accumulate in higher levels in small children.

So your choice according to these books is: 1) buy organic; or 2) play roulette with your child’s health. 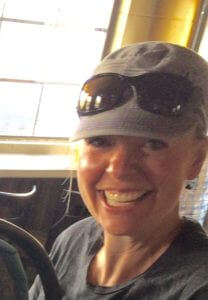 These female authors, all mothers themselves, had just partaken in creating mom guilt. This is a mom-on-mom crime. I say crime because this propaganda, especially when relayed by people with academic credentials after their names, has a real, harmful impact on moms everywhere. Mommy blogs are riddled with guilty confessions of letting little tummies “rumble a little at the end of the month because…I chose not to buy conventional items”—in other words, moms ran out of money buying costly organic foods, which meant their children were short of food as a result.

Others note how they fed their kids junk food but felt that’s okay because it was organic junk food!  “Nearly 75 percent of commercial prepackaged meals and snacks for toddlers are high in sodium,” one wrote, but seeing the word ‘organic’ on packaging decreased my guilt”.

These are not isolated instances. According to a survey conducted by Common Ground, an organization of women in farming, “not being able to afford organic meat, dairy and produce was the No. 1 source of food guilt among moms–edging out overall food affordability.” The obsession with food purity has gotten so extreme that a purity-obsessed eating disorder has been defined: orthorexia nervosa

My mommy guilt became mommy outrage as I realized none of these fear-inducing statements is backed by scientific fact. Feeding Baby cited articles on PCBs not used in agriculture; residential usage of chlorpyrifos; and research by Charles Benbrook, whose research in support of organic agriculture was funded entirely by organic activists before he was severed from his research professorship at Washington State University.

All authors referenced the Environmental Working Group (EWG)’s “Dirty Dozen”, a list of the twelve fruits and vegetables with the highest pesticide residues.  Moms were encouraged to eliminate from their children’s diet these targeted fruits and vegetables “if your budget does not allow a 100 percent organic diet”. The EWG sounds like a scientific organization, but rather lobbies on behalf of the organic industry and is recognized by academic toxicologist as routinely overstating health risks. However, this list, used as a holy grail by mommies everywhere has been dismissed as junk science and inflammatory and has debunked several times over.

The EWG routinely lists as dangerous trace chemicals in food that are thousands of times lower than what the FDA considers potentially harmful.  EWG claims “leafy greens” like spinach regularly carry “toxic pesticides.” That’s hogwash according to the U.S. Department of Agriculture. As the Alliance for Food and Farming (a non-profit comprised of both organic and conventional farmers) notes, in a single day a child would have to eat 2,564 servings of spinach (a member of the Dirty Dozen) contaminated with the highest level of pesticide recorded by the USDA in order to see any effect from consumption of these “toxic” residues.

Carl Winter, a toxicologist at the University of California at Davis, recently told the Washington Post that the Environmental Protection Agency, working from animal research and factoring in the special sensitivities of human subgroups such as babies and children, has found that lifetime risk of adverse health effects due to low-level exposure to pesticide residue through consumption of produce is “far below even minimal health concerns, even over a lifetime.”

Unfortunately, as our fears have risen, so have the organic industries profits. Their vested lobbyists’ efforts are paying dividends.

Piles of scientific data have been unable to demonstrate any health or ecological advantages for organic food over conventionally raised food or produce. It’s not healthier and doesn’t make food taste better. This subject has been reviewed exhaustively. Even the pesticide residue argument doesn’t hold weight since both production practices use pesticides (many natural compounds even being far more toxic than the ever railed against glyphosate, which is actually a comparatively innocuous herbicide). In almost all cases, the pesticide residues in both conventional and organic food far below the acceptable level for human consumption. However, that organic label tricks people into believing it tastes better, is less processed with fewer chemicals and is overall a better choice for your child.

Surprise, organic production is not even healthier for the environment

Because of this relentless propaganda, Americans have come to perceive organic production as a utopic, chemical free, nature-philic system. However, extensive investigation has failed to show proof that organic agriculture protects the environment more than conventional best practices. Even Whole Foods is recognizing conventional farming can be more sustainable and environmentally friendly than organic and they acknowledge that with their Responsibly Grown ratings. They comprehensively evaluate seven different factors ranging from soil health to water conservation and biodiversity and have awarded higher ratings to conventional farmers than organic.

Scientific studies have shown organic agriculture is not as productive as conventional agriculture with yields averaging as much as 34 percent lower for organic production, according to a meta-study in the journal Nature, compared to comparable conventional systems. The recent USDA study of 370 crops grown both organically and conventionally found a huge systematic yield gap, especially in growing fruits and vegetables. Matching yields alone would require deforestation and negatively impact biodiversity.

Many organic farms also use more fossil fuel. The Alliance for Food and Farming interviewed Rod Braga, one of the nation’s largest conventional and organic vegetable producers, about his two production practices. He stated his conventional farm was more environmentally friendly based on fertilizer application alone. He explained this by saying he needs to truck and spread tons per acre on his organic farm versus hundreds of pounds per acre on his conventional farm based on his restriction to use manure versus synthetic fertilizer.

Devastating droughts have been hitting California, yet the demand for organic produce in the state is on the rise. It may surprise those consumers to know that conservation minimum tillage and no-till practices which benefit water quality and conservation are more commonly used by conventional farming.

What matters most to me as a mother is knowing my child will grow up to inherit a healthy planet and have the healthy wherewithal of his own to enjoy it. Without a benefit for the environment or my baby’s own health, I can’t justify paying a premium for food just for a label.  I would rather save those extra dollars to pay for his college education. I want my son to grow up to be an innovator and a critical, independent thinker. How can I expect this of him if I cave to peer pressure-induced guilt and buy into a useless ideology? This mommy will be feeling guilty no more, at least not regarding conventional produce.