It’s all bug spray in the end: Organic pesticides not necessarily safer for bees 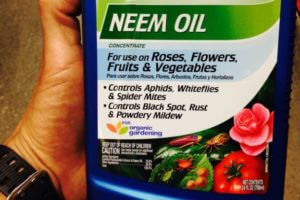 “Finding safe, non-toxic pesticides for the garden that actually work can be a challenge… Neem oil insecticide is everything a gardener could want,” claims a blog post in Gardening Know How, an ironic website name considering its advice.

Earth to Gardening Know How: Neem oil couldn’t possibly work if it weren’t toxic to pests. And evidence suggests that Neem— which contains a number of active ingredients, including the chemical azadirachtin —is not necessarily any less toxic to beneficial insects than heavily tested synthetic ones. In other words, yes, it can be highly toxic — depending on how it’s used.

Today, the battle lines over chemicals has begun to center around the effects some chemicals might have on honeybees and other pollinating insects. A number of recent studies have questioned the widely accepted but speculative belief that organic chemicals are safer than synthetic ones, particularly for “non-target” organisms like bees. In fact, some of these pesticides have exhibited toxicity that at least rivals that of conventional pesticides that are now subject to heavy regulations, even bans.

In a mailing to potential supporters, the Natural Resources Defense Council blamed neonicotinoids, a class of insecticide, for contributing to the death of honeybees — a familiar meme among activist groups despite the questionable evidence:

Now the science is in, and it leaves no room for doubt or delay. The world’s most widely used class of insecticides — called neonics — is a key factor in the devastating loss of bee colonies. Our government should be imposing an immediate ban on all uses of neonics that endanger bees — as the European Union has already done.

The Pesticide Action Network — Europe has built on the anti-neonics fear campaign, offering alternatives; these pest-killing darlings of the organic industry include azadirachtin (also known as Neem oil) and Spinosad, among others. Neem oil, andiroba oil, and (until it was removed from the US market) rotenone have been part of a group of organic-approved chemicals that have been deemed non-toxic to honeybees and other crucial pollinators.

Emerging knowledge of toxicity in organics

Recently, a handful of scientific papers have shaken this assumption of safety to bees.

Some notable bee experts have identified issues with this study’s methodology. Randy Oliver, a biologist and beekeeper in Grass Valley, California, who publishes the Scientific Beekeeper blog, observed, “The adult toxicity study did not allow for ventilation of the volatile oils, so was really a test of both contact and fumigant effects. The larval feeding amount of products was excessive.”

“Although the botanical pesticides that were studied collectively killed roughly 50 percent of adult bees, depending on the chemical that was used, it is far from clear that these tests have any relevance to real life,” observed Josh Bloom a scientist with the American Council on Science and Health.

What did we learn from the study? Oliver and other experts agree that any insecticide, organic or synthetic, at the right dose can also be harmful to bees. Wrote Bloom: “That the six organic pesticides tested are toxic to bees at some dose — the exact same argument that we make when evaluating the toxicity of any chemical, natural or otherwise: The dose makes the poison.”

In other words, the belief that organic chemicals are inherently safer is wishful thinking.

Another study from the University of Ghent, Belgium, did look more closely at dosages, finding harmful effects on bumblebees from Neem (azadirachtin). Testing the compound at concentrations above and below those used in farmers’ fields, the team discovered that Neem concentrations 50 times lower than concentrations commonly used started harming bumblebees (at this level, fewer males were hatching compared to controls and those that did hatch exhibited deformities). Fewer than 30 percent of bumblebees survived exposure to concentrations greater than 6.4 mg/l (an exposure considerably lower than the accepted field concentration of 32 mg/l).

The toxicity of these chemicals, organic or conventional, has been — or should have been — well known. In 2009, the Xerces Society published a comparison list of various organic pesticides that showed more than a few were toxic to honeybees. And, Thurston County, Washington, in the U.S. rated neem as moderately to highly toxic to honeybees.

However, published literature studies on pollinators have been plagued by methodogical problems that have made comparisons and standardization difficult. For example, many studies rely on oral ingestion of pesticides; test only the active ingredient (not the formulation of the pesticide); or otherwise don’t try to replicate actual field usage. Even Thurston County listed its LD50 (the dose that kills half a test population) as “per bee,” not “per liter or per kilogram,” as other studies have.

“I, as a beekeeper, would be more interested in clearer and standard contact toxicity, residual toxicity, and larval toxicity in ppb studies,” said Oliver. Cynthia Scott Dupree, an entomologist at the University of Guelph, Ontario, agreed. On the Brazilian study, she noted, “The paper doesn’t indicate the exact dose of each insecticide used in the study; they just refer to recommended label rates but I have no idea what those are in Brazil.” But, she added, “They tested botanical insecticides, which at the right dose will be toxic to insects, and honey bees are insects.”

Based in limited evidence, it’s simplistic to demonize synthetic pesticides and promote organic alternatives as many activists groups do as a matter of course. Anything at the right dose can be a killer. More standardized, field-accurate ways of testing pesticides, even so-called natural ones, will go a long way to determining what’s truly “safer.”