Campaigns against genetically modified organisms (GMOs), originating primarily in Europe, have created significant obstacles to the development and adoption of genetically modified crops. While the policies and practices resulting from these campaigns impose considerable costs on the economies of origin, they disproportionately hurt those nations with the greatest need for more productive agriculture — particularly the developing nations of sub-Saharan Africa. Information Technology and Innovation Foundation (ITIF) estimates that the current restrictive climate for agricultural biotech innovations could cost low- and lower- middle-income nations up to $1.5 trillion in foregone economic benefits through 2050. In short, anti-GMO activists have erected significant barriers for the development of the poorest nations on earth.. . . . 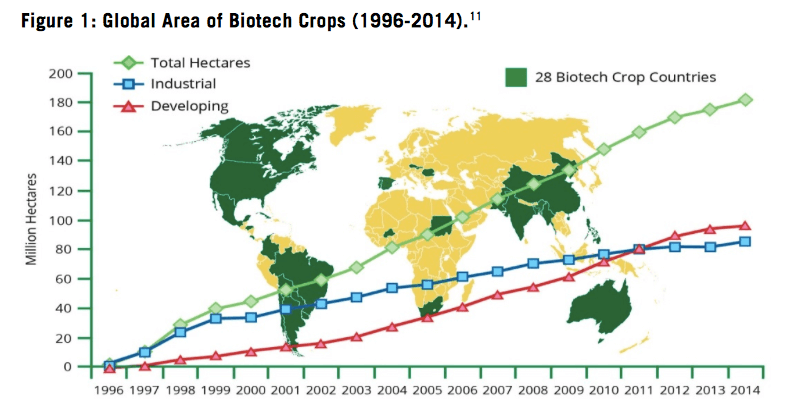 In 2014, seeds improved through biotechnology were grown by 16.5 million small farmers in 20 developing countries on 230 million acres (53 percent of the global total). . . .These smallholders enjoyed increased income amounting to $16.7 and $16.2 billion, respectively, while benefitting from a 50 percent reduction in pesticide applications on their crops. . . . .

. . . Figure 1 clearly shows two regions lagging in their adoption: Europe and Africa. Indeed, only 3 of the 54 countries in Africa grow any biotech-improved crops. . . .

Adoption of biotech-improved seeds by farmers in developing countries has been impeded by two main factors: scientifically indefensible regulations limiting GMO use and export limits, largely driven by Europe. The former have been driven by NGO campaigns to demonize GMOs, European foreign aid and other pressures aimed at reducing GMO use, and mixed impacts from various United Nations programs.

The most important vehicle through which European anti-GM forces have impeded GMO use in developing nations, particularly in Africa, is the widespread use of nontariff trade barriers for GMO exports. . . .

A third driver of reduced GMO use in Africa is political discord fomented by activist groups that continues to stymie African agricultural innovation efforts. For example, Greenpeace International and Friends of the Earth International, both based in Europe, have campaigned heavily in Africa against agricultural GMOs. . .

. . .  It is difficult to estimate the full economic impact of these pressures on African agricultural productivity, but some estimates can be made.

In 2013, the average global adoption rates for biotech-improved seed were 79 percent for soybean, 32 percent for maize, and 70 percent for cotton. To estimate the opportunity costs borne by countries that have not yet adopted biotech crops, we calculated the gains they would have seen had they adopted biotech varieties starting in 2008 at rates comparable to those in adopting countries. Next we use the global average of a 22 percent yield increase for biotech crops, although this number represents a conservative estimate for developing countries. Discounting African nations that are already growing biotech crops (South Africa, Burkina Faso, Sudan), we superimpose 2013’s global adoption rates onto other African countries’ production in soybean, maize, and cotton, while holding prices constant:

These projections provide a conservative estimate based on the adoption of biotech- enhanced seeds, and leads to an overall increase in the total gross value added of maize, cotton, and soybeans planted in Africa by 8 percent more than 2013 levels, or an absolute amount of $984 million. 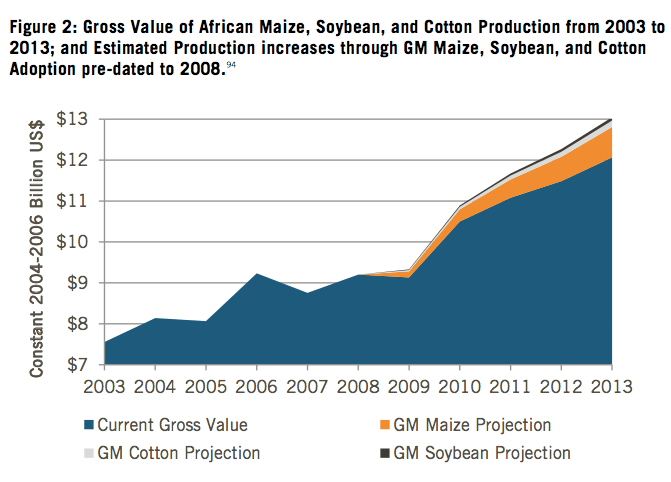 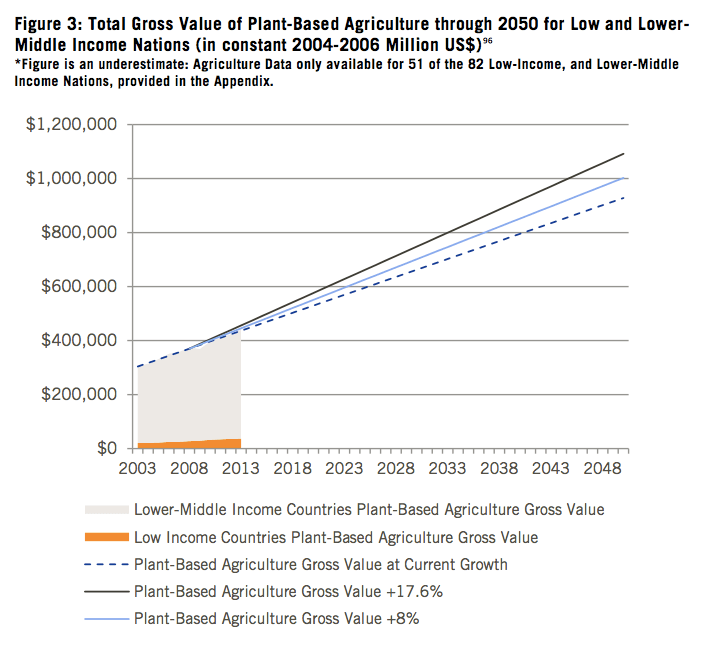 A healthier agricultural industry in these countries will provide a boost to the rest of the nation’s economy. If all other factors were constant, ITIF estimates that the continued suppression of biotech innovations in agriculture has cost African agricultural economies alone at least $2.5 billion from 2008-2013, and as illustrated in Figure 3 (by the difference between the areas captured by the solid gray and dotted blue lines from 2015-2050), will cost low- and lower-income countries worldwide as much as $1.5 trillion from 2015-2050 in agriculture value forgone. . .

This is a condensed version of a report issued by the Information Technology and Innovation Foundation (ITIF) is a nonprofit, nonpartisan research and educational institute focusing on the intersection of technological innovation and public policy. A pdf version of the full report is available here:  Suppressing Growth: How GMO Opposition Hurts Developing Nations