Ask your doctor if a fecal transplant is right for your multiple sclerosis.

This ad doesn’t exist, but it might someday. Researchers are spending more time exploring the characteristics of the microbiome, the bacteria and other microbes that reside in our intestines and how they affect our health. This research is now reaching into connections with diseases of the nervous system, an area of the body long considered “off limits” from the intestinal system by researchers and doctors alike.

This has led a number of supplement companies, including Customprobiotics.com, to begin selling probiotics — products that contain live, potentially healthy bacteria that are meant to colonize the human body with the belief it will improve health — to treat a number of nervous system disorders, like multiple sclerosis (MS) and autism. The company’s “Probiotic Supplements for Autism” feature:

D-Lactate Free Probiotic Powder. D-Lactate is a by-product of probiotic fermentation that may produce neurological problems. Our D-Lactate Free Probiotic powder formulation is very high in potency at 250 billion cfu’s per gram. It contains L. Salivarius, L. Rhamnosus, B. Bifidum, B. Infantis and B. Longum. It is dairy free, hypoallergenic and does not contain any artificial colors, flavors, sugar, casein, gluten, soy or FOS. Children with ASD have used our D-Lactate Free formulation successfully worldwide. Daily probiotics usage is recommended and dosage varies from person to person. Dosage depends on the age of the child, extent of intestinal flora imbalances due to candida or other pathogenic bacteria and the response of each child to it.

The supplement industry, for the moment, is reacting to research that while promising, hasn’t progressed beyond tracing correlations between variations in the microbiome and certain nervous system disorders. But there are signs that such correlations might be transformed into causes, once more is known about how the nervous and gastrointestinal systems interact.

Scientific advancement in this area may have another challenge: the attitude of scientists and physicians. The brain and nervous system have traditionally been perceived as separate from most of the body, thanks in large part to the presence of the impenetrable blood brain barrier, which insulates the brain from other systems in the body (or so it’s been thought). One noted Southern California neurosurgeon thus expressed his preference for operating on the brain over the liver or other more thoracic organs, “I like the brain; it’s clean.” 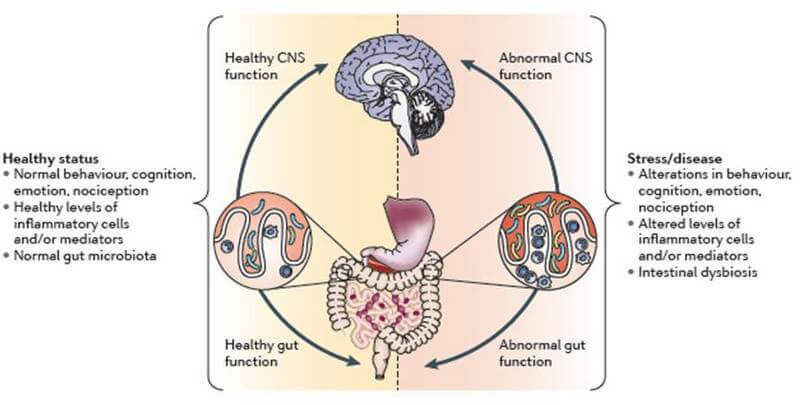 The gut, it turns out, receives signals from the central nervous system, and in reverse, the central nervous system receives signals from the gut. A number of scientists have termed this communication signal the “gut-brain axis.” This axis appears to include peptides transported through blood to the brain to indicate satiety (“I’m full!”). It also can send message through endocrine pathways like the pituitary and adrenal glands, which communicate with the hypothalamus in the brain. In the other direction, this “axis” includes stress-induced messages that ultimately raise corticosterone levels, create immune responses and change the microbiotic composition of feces in the guts (in this case, of rats).

The immune system may also serve as a pathway for signals between gut and brain. Long considered a system apart from immune cells, it’s now known that the brain and nerves do contain immune cells. And researchers have found that autoimmunity changes can arise because of signals from the nervous system, and a number of immune signals (like interleukins, C-reactive proteins, tumor necrosis factor and others) are risk factors for depression. 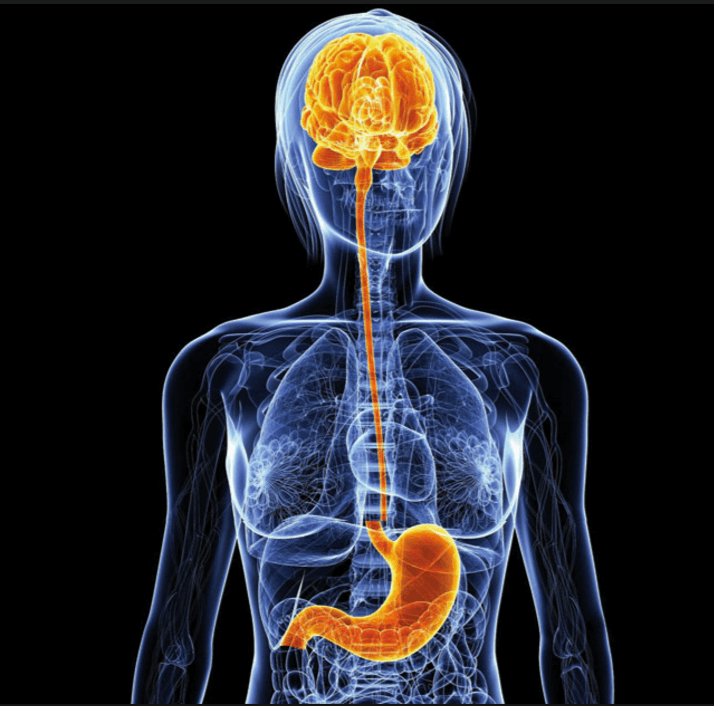 Most connections between the microbiome and nervous diseases (at least in humans) are still in the realm of possibility, it not yet probability. “It’s very difficult to tell is microbial differences you see associated with diseases are causes or consequences,” Rob Knight, microbiologist at the University of California, San Diego, told Nature last fall. But some clues behind the correlations are starting to turn into connections, at least for some diseases.

Multiple Sclerosis—While it’s still unknown whether or not microbiomes have any impact or cause of MS, some studies show that more MS patients have antibody responses against gastrointestinal microbes than people without MS. In addition, animal models of the myelin sheath degradation seen in MS show that spontaneous degradation of myelin depends on microbiome organisms, and that antibiotics could reduce this degradation with the help of immune cells produced by the microbiome.

Autism — An Italian study published this year showed that imbalances in the ratio of certain bacteria and fungi, and increases in Lactobacillus, Sutterella and other microbes correlated with autism. The scant data available showed that therapeutics, such as antibiotic drugs or probiotic bacteria, seemed to reduce autism incidence in experimental models.

Mood disorders — The same Italian study indicated that over-expression by the gut of the bacteria Alistipes has been implicated in chronic fatigue syndrome, IBS, as well as depression. It may be involved by generating inflammatory molecules that can alter the permeability of the intestine. Low levels of other bacteria in the gut, such as Faecalibacterium, appear related to the severity of depression.

So, how could the microbiome actually cause disease?

Hygiene — a hypothesis exists stating that lack of exposure to infectious agents in childhood could result in later T-cell related allergic diseases. Scientists are exploring the possible role between helper T cells that target microbes, and could send signals to the brain that triggered immune-related central nervous system disorders, such as Type 1 diabetes or MS.

Antibiotics — Cell signaling molecules like IFN-y and interleukin-17, which encourage inflammation, were reduced in antibiotic treatment of an animal model that mimics MS. This may indicate a benefit of antibiotic treatment in the gut for neurological disorders. However, other studies showed that antibiotics could change certain central nervous system signals, such as those emanating from the hippocampus, a memory center in the brain.

Probiotics — now part of the arsenal of supplement sellers purporting their health benefits, these beneficial live bacteria have been observed regulating immune cell balances, and even changing regulation of certain neurotransmitters. Probiotic treatment was seen to alter levels of a neurotransmitter called kynurenine levels, reversing a number of nervous system disease models in animals.

Microbiome-derived signals — Signaling molecules like serotonin, GABA, melatonin and histamine were all observed being synthesized or mimicked by metabolites that originated from microbiome members. In fact, metabolites, including signaling molecules, which are created in the microbiome are being seen as essential to communication along the gut-brain axis.

Leaky guts — still a very controversial topic when it comes to direct therapy or supplements, “gut permeability,” as some prefer to call it, has been associated with microbiomes and nervous disorders. Immune reactions in the blood, persistent inflammation and irritable bowel syndrome may all work together to weaken the integrity of the mucus that epithelial cells that provide a barrier between the gut and bloodstream.

It’s not time to “ask your doctor” yet. But it may be time for them to keep their eyes open.