Why vitamins and nutrients are disappearing from non-GMO food

Health is a big reason people say they choose organic or non-GM foods over conventional versions. But is this really the case? Often activists make claims that studies show GMOs cause dangerous effects on human health like increases in allergies or cancers (see the discredited work by Gilles-Éric Séralini). Anti-GMO groups have long opined that genetic modification in food carries health risks. Meanwhile, others simply believe that by virtue of possessing an organic label, the food is inherently more nutritious than conventionally grown food—like a study from February 2016 which stated that organic milk and meat had more of certain important nutrients like iron and Vitamin E.

On the other hand, many pro-GMO activists make the claim that GMOs have been thoroughly tested and found to be equivalent in nutrition and safety to organic food. The World Health Organization declared this while also acknowledging that concerns about possible health effects of GM foods have led to a safety assessment process quite unlike anything for conventional, non-GM foods.

Yet look around the supermarket, and compare organic, non-GMO, and conventional foods and you may find something different: Organic and non-GMO foods are less healthy and nutritious than conventional foods. How did this happen?

The National Organic Program (NOP) of the USDA and the private, non-profit Non-GMO Project both advertise the fact that any food under their labels is free from genetic modification. And a number of companies, including General Mills, makers of the Cheerios brand of cereal, include “no genetically modified ingredients” as part of their reasons for the food’s “wholesomeness.” On Cheerios’ website, the company declares on its site:

But a look at the labels of some foods (including Cheerios) before and after inclusion in the Non-GMO project or NOP shows a distinct change in nutrition. For a large number of products, the vitamin content dropped, and for some nutrients, disappeared altogether.

Post, the maker of Grape-Nuts, “no longer includes Vitamin A, Vitamin D, Riboflavin, and Vitamin B12,” a spokesperson told Food-Navigator USA. 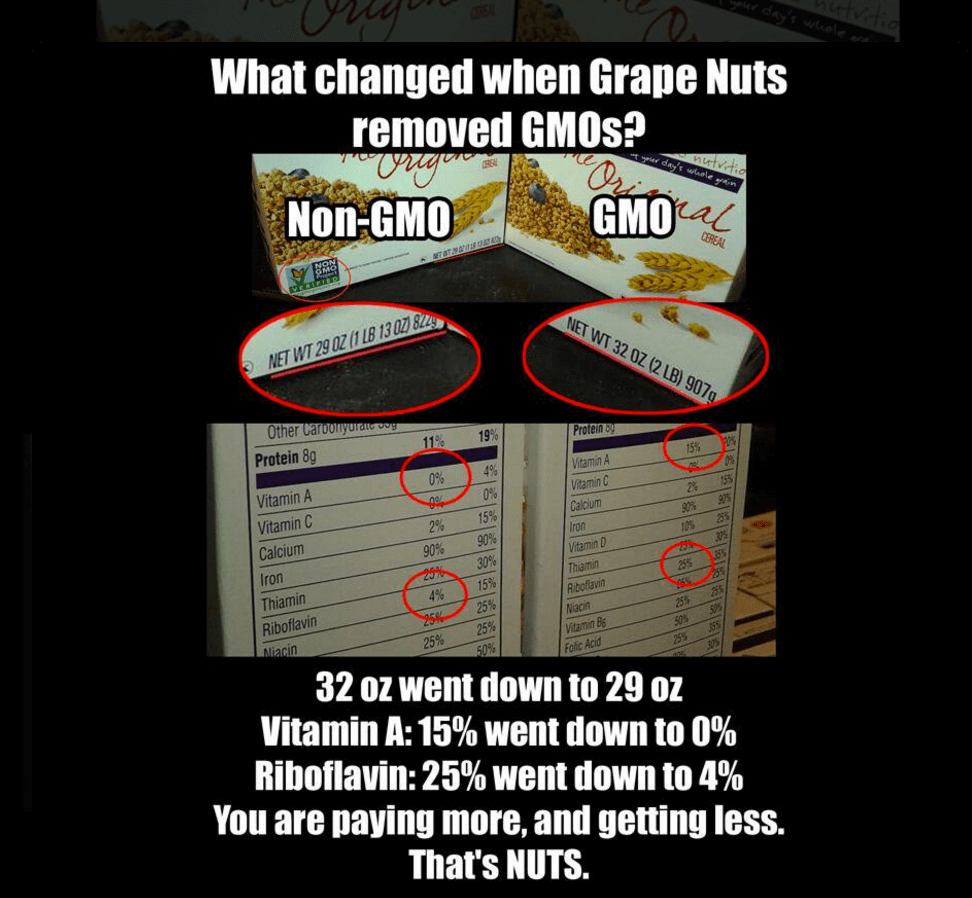 Some brands of salt (as in sodium chloride) now carry the Non-GMO Project label. While salt isn’t created by any enzymatic, protein-based or genetic process, and therefore can’t be genetically modified, the Non-GMO salt does lack one ingredient—iodine. This ion was included to prevent goiter and other metabolic disorders. While not the only source of iodide, kelp and soy are popular sources of the ion and can be made through genetically modified organisms.

Good nutrients are hard to find

The reasons for Vitamin and micronutrient losses appear to be a head-scratcher at first: why should moving to organic or non-GMO reduce vitamin content?

The answer is in the supply chain. Most vitamins are fortified in cereals and other foods—that is, they’re included from another sources during the manufacturing process. And the sources of these vitamins can largely come from genetically modified crops.

Under the National Organic Program, these fortifications are permitted for organic foods. But other, stricter programs like the Non-GMO Project, and even some organic vendors, don’t allow any ingredients that came from genetically modified sources. Even the NOP is facing criticism for allowing some GM micronutrients and fortifications.

The NOSB should be aware that a growing number of vitamins are produced using genetically engineered organisms, making it ever more necessary to develop natural and from organically produced and non-synthetic sources.

Supply chains aren’t easily changed. But as one commenter on the web asked, “What is the non-GMO seal worth?”