Golden Rice, an Asian rice genetically fortified with beta-carotene that could ease global malnutrition, is at the emotional epicenter of the GMO battle.

Its supporters cite it as the poster child for how genetic engineering could save millions of lives while GMO foes dedicate huge resources to stop its progress because of ideological reasons. It’s a vicious fight with both sides engaged in passionate rhetoric, but most people just hope for any reasonable solution to fight the scourge of Vitamin A deficiency (VAD) around the world, including the use of genetically modified Golden Rice.

While activists on both sides may disagree about Golden Rice’s promise, there is zero debate that VAD is a health crisis that kills or blinds hundreds of thousands of children every year. Genetic engineering is the only way right now to boost the beta-carotene content of rice, a food that half the world eats every day. This is no simple task.

Unfortunately, many Golden Rice critics are eager to pounce on any setback. They go to great lengths to dispute Golden Rice’s potential, such as whether the rice will contain enough beta-carotene or whether it will be culturally accepted. Opponents don’t just report on the difficult scientific challenge of creating this humanitarian innovation, they crow about the obstacles and seem to relish how much time it’s taking to perfect the rice.

The latest salvo is from Glenn Davis Stone, a Washington University in St. Louis anthropology professor. In an academic study released last month, “Disembedding Grains: Golden Rice, the Green Revolution, and Heirloom Seeds in the Philippines,” Stone not only pokes holes in virtually every feature of Golden Rice, he claims to address the role of international anti-GMO activists who have been criticized for contributing to the delay in the crop’s commercialization.

Golden Rice is still not ready for the market, but we find little support for the common claim that environmental activists are responsible for stalling its introduction. GMO opponents have not been the problem.

Anti-GMO groups eagerly started echoing his claim (here, here), almost chortling over the fiction that GR is somehow a ‘failure’ because it has not yet overcome expensive, technical hurdles.

Stone’s statement is baffling since Stone could have found more than a little support for that claim in the articles he cites for his own report. For example, he references a paper by Adrian Dubock of the Golden Rice Humanitarian Board about the progress and challenges in developing Golden Rice, but he overlooks a number of Dubock’s important comments that are contrary to the narrative Stone is trying to create. Dubock says this about how activist groups have frightened legislatures into constructing complicated but largely unnecessary legal barriers:

Right from the first Golden Rice Humanitarian Board meeting in August 2000, and at every subsequent step, scientific progress of research has been shaped and impeded by the regulatory requirements for GMO-crops.

The regulatory requirements Dubock refers to are based on the Cartagena Protocol on Biosafety, which many technology-fearful non-profits, most notably Greenpeace—one of the world’s most anti-GMO organizations—proudly takes credit for helping to create.

Dubock says the Cartagena Protocol’s precautionary restrictions on biotechnology have made it extremely difficult for sparsely-funded humanitarian science research projects to progress:

The ability of the international co-operators to share Golden Rice seed and pool their seed breeding resources…was increasingly restricted as the malevolence of the Cartagena Protocol took root in increasingly bureaucratic obligations.

Dubock goes on to refer to the effects of ‘political activism in the guise of health and environmental concerns:

As the debate became more intense, some institutional participants became frightened of ‘potential liability issues.’ Most international organisations quietly avoided any funding or association with ‘GMO-crops’ even those which had clearly huge potential for good, such as Golden Rice.

According to Dubock, the Greenpeace-created regulatory burden has had an “insidious” impact on the science and that political activism and has eroded collaboration and funding for Golden Rice. This directly repudiates Stone’s claim that GMO opponents ‘aren’t a problem.’ 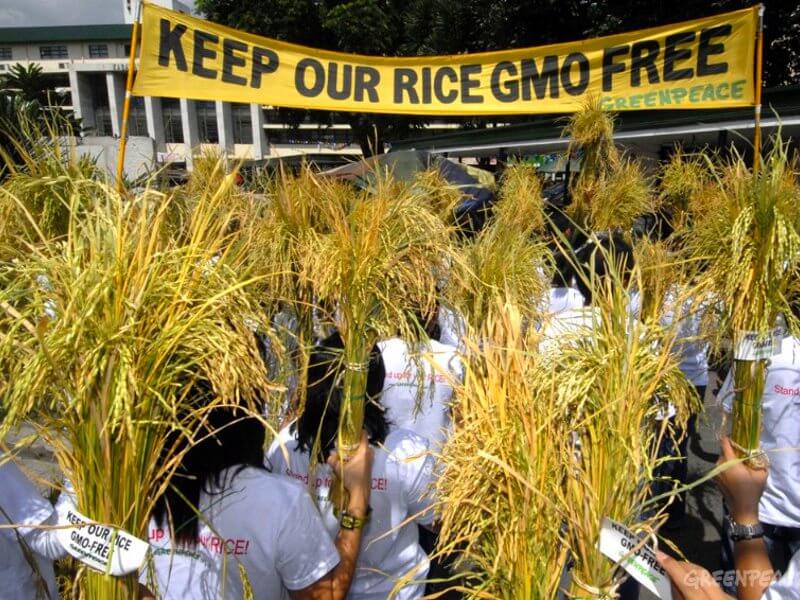 Stone also goes out of his way to absolve Greenpeace of its most destructive actions, such as when their associates ripped up a Golden Rice test field or how the group successfully petitioned the Philippines’ Supreme Court to halt (temporarily) development of GMOs, including Golden Rice. He may be accurate to say they haven’t technically impacted scientific progress on Golden Rice but he most certainly doesn’t provide evidence of his case that GMO opponents “aren’t the problem.”

That isn’t the only time Stone has demonstrated his cynicism toward Golden Rice. In a podcast interview in February 2016 (in which he refers to Golden Rice in the past tense), Stone buys into a theory proposed by Mother Jones reporter, Tom Philpott, who questions whether the Golden Rice project has made Vitamin A deficiency worse. “By sucking in and tying up resources that could have gone to methods of dealing with the problem we know are effective, has it sucked up enough resources to have actually possibly worsened the problem?” Stone took Philpott’s anti-GMO leap of logic and ran with it:

Genetic engineering has sucked up a lot of resources and had it not come along, or had it not played the role maybe some of those resources would have gone to other kinds of crop development. I don’t think there is any doubt about that. …

I think it has sucked resources away from things that might have been done. Whether or not it has led to a worsening of Vitamin A, I can’t say. But I certainly think you have a good point on its potentially negative impact on other the directions of other interventions.

The fact is the the Golden Rice project—sparsely funded by science groups, corporate donations of time and patented resources, and spotty foundation support—has not ‘sucked up” any humanitarian dollars that could have possibly gone to better non biotech solutions. And despite claims on anti-biotech sites to the contrary, years of well-funded failed efforts in trying to combat a growing crisis suggests Golden Rice is by far the best untried option now available. Moreover, corporations, which have donated their technology and patents for free, will own none of this innovation; it’s purely humanitarian.

With a global health crisis of this magnitude, we should all be supporting every effort to combat human suffering instead of campaigning for the failure of possible solutions. At the very least, kindly get out of the way.

Julie Kelly is a food policy and agricultural writer in Orland Park, IL. You can reach her on twitter @Julie_Kelly2

Amy Porterfield Levy is a Writer, activist, mother from Atlantic Beach, FL and founder of An Ecomodernist Mom @amystruth on Twitter.