Human enhancement is at least as old as human civilization.

Up to this point in history, however, most biomedical interventions, whether successful or not, have attempted to restore something perceived to be deficient, such as vision, hearing or mobility. Even when these interventions have tried to improve on nature – say with anabolic steroids to stimulate muscle growth or drugs such as Ritalin to sharpen focus ­– the results have tended to be relatively modest and incremental.

But thanks to recent scientific developments in areas such as biotechnology, information technology and nanotechnology, humanity may be on the cusp of an enhancement revolution. In the next two or 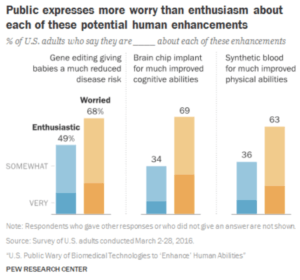 three decades, people may have the option to change themselves and their children in ways that, up to now, have existed largely in the minds of science fiction writers and creators of comic book superheroes.

Both advocates for and opponents of human enhancement spin a number of possible scenarios. Some talk about what might be called “humanity plus” – people who are still recognizably human, but much smarter, stronger and healthier. Others speak of “post-humanity,” and predict that dramatic advances in genetic engineering and machine technology may ultimately allow people to become conscious machines – not recognizably human, at least on the outside.

The GLP aggregated and excerpted this blog/article to reflect the diversity of news, opinion and analysis. Read full, original post: Human Enhancement–The Scientific and Ethical Dimensions of Striving for Perfection