Epigenetics, pregnancy and the Holocaust: How trauma can shape future generations

The Guardian has reported on an epigenetic study in an article titled “Study of Holocaust survivors finds trauma passed on to children’s genes“. It discusses a paper, “Holocaust exposure induced intergenerational effects on FKBP5 methylation“, in Biological Psychiatry. I get excited by teachable moments so I decided to take the opportunity to teach some more epigenetics (see my pages on Facebook or Google+ for my Intro to Epigenetics series).

Epigenetics literally means “over the genome”. It encompasses all meiotically and mitotically heritable changes in gene expression that are not coded in the DNA sequence itself. If we break that down, there are some key points to note:

Epigenetics generally refers to 4 mechanisms: DNA methylation (and other modifications to cytosine), histone modifications, non-coding RNAs, and long-range chromatin interactions (3D structure of chromosomes). In this paper, the authors focused on DNA methylation and identified changes in DNA methylation that occur in people who were in a Nazi concentration camp, witnessed or experienced torture, or hid from the Nazis during World War II. Similar changes were seen in their children. This transmission of a trait from parents to children is called intergenerational inheritance.

However, it is difficult to separate out the different mechanisms that contribute to the inheritance of traits to subsequent generations. Thus, it is an important research question to ask how the effects of trauma, stress and other exposures are passed from generation to generation. This is the question the scientists wanted to address in this paper: is there an epigenetic component to the intergenerational inheritance of the effects of trauma? 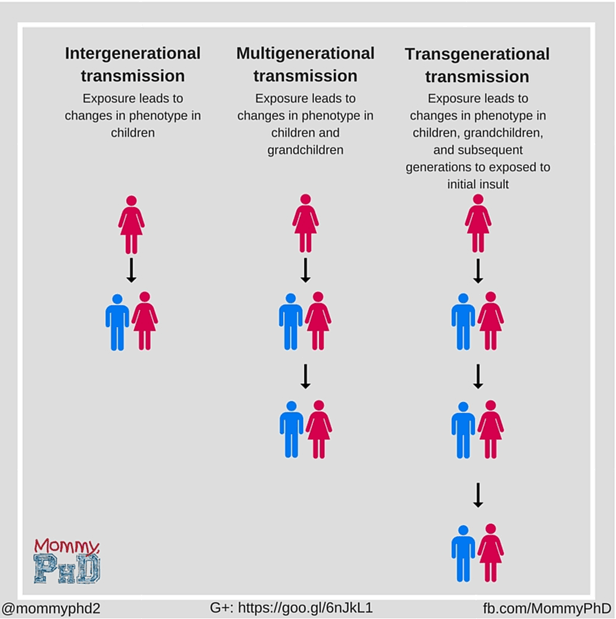 This paper provides direct evidence in humans that the epigenetic effects of pre-conception stress can be seen in both parents and offspring. The authors looked at one specific gene only – FKBP5 – because it is known to be involved in the response to high glucocorticoid levels (a biological signal for stress) and is a possible novel target for antidepressant medication. They looked for changes in DNA methylation in glucocorticoid response elements within this gene. Response elements are sequences of DNA that bind to specific transcription factors and regulate transcription of genes. In this case, glucocorticoid response elements are bound by glucocorticoid hormones and their receptors to regulate expression of the gene containing the response element. They found changes in DNA methylation in these specific elements of the specific FKBP5 gene in Jewish Holocaust survivors and their children, but not in other Jewish people of similar age.

This observed change in DNA methylation of the FKBP5 gene was in the opposite direction in parents and offspring, yet we do not yet have an explanation as to why this change would be different in parents and offspring. Thus, it is actually impossible to say from the results of this paper if these epigenetic changes are due to direct effects of stress and high glucocorticoid levels (or other shared environmental factors) or to inheritance of epigenetic marks.

Let’s say a woman or girl lived through the Holocaust. She and her eggs were exposed to high glucocorticoid levels, and other effects, due to stress. If a woman was pregnant during this time, she, her eggs and her in utero daughters’ eggs were exposed. So that’s 2, and possibly, 3 generations directly exposed to the stress. Until you get to the 4th generation, there is still a possibility of direct exposure. It might be epigenetic, but it is also possible that it’s still a result of direct exposure. Changes must be observed in the generation the great-grandchildren to definitively say that they are epigenetically inherited and not a result of direct exposure. In general, the great-grandchildren are the first generation that was definitely not directly exposed to the stressor. However, in this case, they looked at preconception stress, so looking at the 3rd generation (grandchildren) would be sufficient to differentiate between epigenetic inheritance and direct exposure.

This paper only looks at parents and their children. So the eggs that produced ALL those children were directly exposed (since females are born with all their eggs) to the trauma. It’s possible that high glucocorticoid levels directly affect the methylation of FKBP5 in the eggs as well in cells of the parent. The discussion of the paper itself goes into this, but the article overlooked this point and it’s a really important point to understand if you are interested in epigenetic inheritance.

From the discussion section of the paper:

The main finding in this study is that Holocaust survivors and their offspring have methylation changes on the same site in a functional intronic region of the FKBP5 gene, a GR binding sequence in intron 7, but in the opposite direction. To our knowledge, these results provide the first demonstration of transmission of preconception stress effects resulting in epigenetic changes in both exposed parents and their offspring in adult humans. Bin 3/site 6 methylation was not associated with the FKBP5 risk-allele, and could not be attributed to the offspring’s own trauma exposure, their own psychopathology, or other examined characteristics that might independently affect methylation of this gene. Yet, it could be attributed to Holocaust exposure in the F0.

It is not possible to infer mechanisms of transmission from these data. It was not possible to disentangle the influence of parental gender, including in utero effects, since both Holocaust parents were survivors. Epigenetic effects in maternal or paternal gametes are a potential explanation for epigenetic effects in offspring, but blood samples will not permit ascertainment of gamete dependent transmission. What can be detected in blood samples is parental and offspring experience-dependent epigenetic modifications. Future prospective, longitudinal studies of high risk trauma survivors prior to conception, during pregnancy and postpartum may uncover sources of epigenetic influences.

This article appeared in August 2015 in the now defunct Sound of Science blog as was recently reposed to MyScizzle.com, here.

Alison Bernstein a neuroscientist studying the role of epigenetics in neurodegenerative diseases and toxic exposures. She lives in Atlanta with her husband, 2 kids, and 2 cats. You can follow her on Facebook and G+, where she writes as “Mommy PhD”, and on Twitter @mommyphd2.