Anti-GMO crusader Jeffrey Smith: ‘Labeling GMOs was never the end goal it was a tactic to get them banned’

Because “public-interest” groups cloak themselves with the feel-good mantle of protecting consumers, the environment, animals, etc., the motives of such groups rarely get questioned. But . . . all too often, activists put their own self-interest before the public’s interest.

In reacting to the federal [GMO labeling] law’s passage, some mandatory-labeling proponents confirmed that labeling has always been a means to much larger ends. For instance. . . the founder of the Institute for Responsible Technology. . . implored his followers that “we are still winning the . . . effort to eliminate GMOs from the market altogether. Labeling GMOs was never the end goal for us. It was a tactic [to get them banned]” . . .

Related article:  Why GMOs aren't responsible for a spike in food allergies 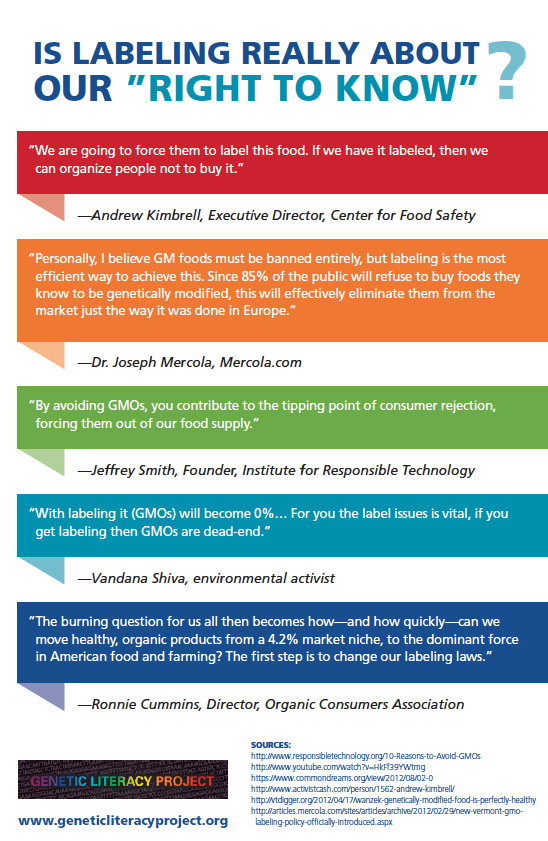 The pursuit of prohibition behind the veil of consumers’ “right to know” would be the ultimate betrayal of the public interest. . . .  most consumers prefer the healthy option of cheaper food produced with the benefit of harmless GMO technology. . . .

The GLP aggregated and excerpted this blog/article to reflect the diversity of news, opinion and analysis. Read full, original post: Crusade Or Charade: What’s Really Motivating Efforts To Mandate GMO-Labeling?