The International Agency for Cancer Research (IARC), a World Health Organization subgroup, has come under scrutiny because of how it evaluates the health risks posed by different products or occupations. For example, it puts processed meat, excessive sunlight, and working as a hairdresser in the same hazard category–class 2A, “probably carcinogenic”–as plutonium and tobacco. These categorizations have led to criticism from scientists and journalists, most recently in this in-depth piece by Reuters.

[The Genetic Literacy Project has an analysis of the safety concerns raised about the herbicide glyphosate, “Is glyphosate (Roundup) dangerous?”]

What confuses many people–the public and regulators–is that IARC does not actually look at how risky something may be–how long would a person have to be exposed to the sun or how much processed meat a person would have to eat to lead to serious health problems. After all, almost anything can pose dangers if a person is exposed to it long enough. Said another way, Risk=Hazard x Exposure. IARC never actually examines what exposure levels are safe and what are not; it only looks at theoretical dangers, not actual ones. 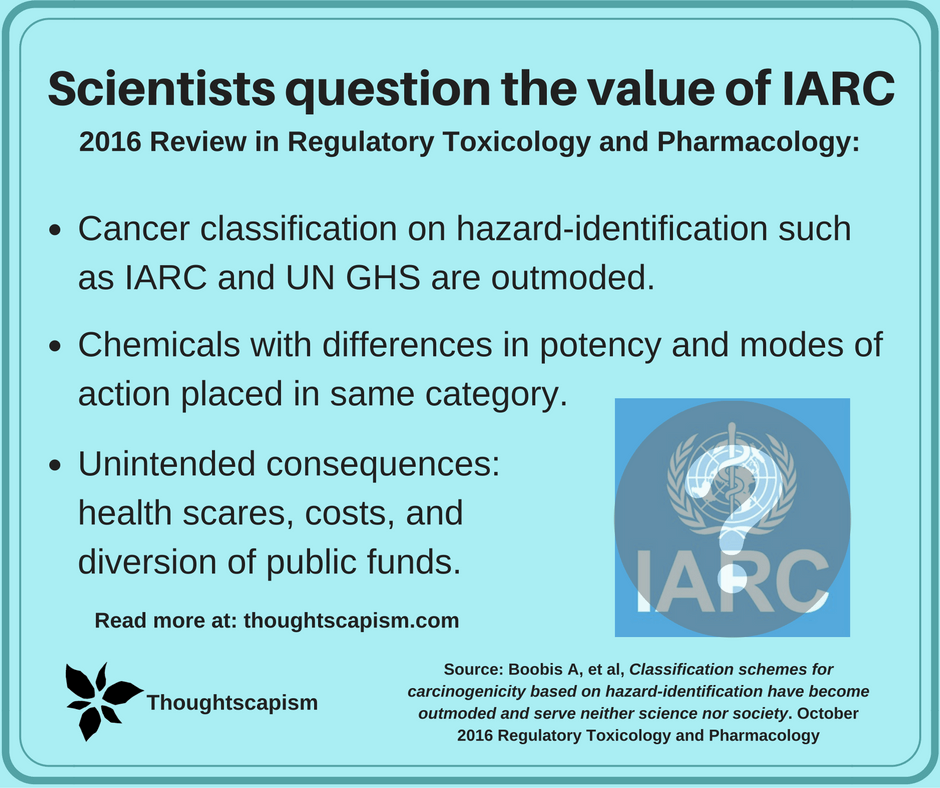 Many expert toxicologists have weighed in on the lack of scientific justification for the simplistic division of substances (and an array of other circumstances, such as occupations) into two categories, non-carcinogenic and carcinogenic, without consideration of drastically different levels of potency and modes of action. On top of that, there are also several concerning aspects about how IARC has handled the specifics around various review, such as meat or cellphone radiation or various chemicals, as noted by Reuters.

Questionable selection and interpretation of studies

IARC is also being challenged over how it has interpreted some studies. For example, it reviewed one study that it said concluded glyphosate was genotoxic. But one of the authors of that study said that IARC’s representation was incorrect. Toxicologist Keith Solomon challenged how IARC interpreted his research.

Keith Solomon, a University of Guelph professor emeritus and a globally recognized authority on pesticides, said the conclusion is “totally wrong.” Solomon should know because he wrote the Colombian study. “They stated there was evidence of genotoxicity and they quoted one paper to support that statement,” Solomon said. “There’s no evidence that glyphosate is genotoxic.”

The study, focused on glyphosate use in Columbia, can be read here. Solomon also has published a separate, recent analysis of glyphosate exposure levels based on data from the US Environmental Protection Agency and UN Food and Agricultural Organization, and has concluded that glyphosate exposure is so low as to be well within the robust safety margins set by regulatory agencies:

All of these exposures are less than the reference dose and the acceptable daily intakes proposed by several regulatory agencies, thus supporting a conclusion that even for these highly exposed populations the exposures were within regulatory limits.

IARC notably did not include in its analysis this more sweeping Solomon study.

Some have criticized IARC for alleged ethical conflicts and a lack of transparency. One of the key researchers of the IARC report, Chris Portier, has connections to advocacy organizations that was not disclosed to other IARC members or to the public, raising questions the organization’s transparency and Portier’s motivations.

Additionally, after IARC issued its designation, Portier embarked on a campaign to discredit the herbicide. (Here is Genetic Literacy Project’s short summary of that original piece):

Individuals closely associated with IARC, such as Dr. Christopher Portier, have used the IARC’s findings to lobby against its use. For instance, Dr. Portier led a group of activists in a letter to the EU Commissioner for Health and Food Safety, suggesting that the IARC classification was more rigorous than that of the European Food Safety Administration’s (EFSA) classification of glyphosate and urging the Commissioner to “disregard the flawed EFSA finding on glyphosate.

In fact, Portier was the chairman of a 2014 IARC meeting to determine the organization’s priorities in research for the coming year, which incidentally included glyphosate. According to Reuters, Portier represented a conflict of interest for IARC due to his part time employment with the Environmental Defense Fund. Additionally, Portier did not disclose his EDF affiliation in the 2014 advisory group meeting mentioned below, at which glyphosate was scheduled for review.

IARC is specifically charted to evaluate hazard (not looking at exposure) and not risk. But in the case of the glyphosate designation, in often referred to its analysis as a risk review. According to the piece, IARC declined a request from the World Health Organization to change references in the study from ‘risk, which is misleading, to the more accurate ‘hazard’ classification.

A paper just published in Regulatory Toxicology and Pharmacology criticizes IARC’s mission, which is to simplistically divide substances into carcinogenic or non-carcinogenic hazard categories, without taking in consideration the degree and nature of exposure–risk. ,Key highlights from Classification schemes for carcinogenicity based on hazard-identification have become outmoded and serve neither science nor society:

UN GHS refers to Globally Harmonized System of Classification and Labelling of Chemicals. The expert toxicologists’ take on IARC’s methodology:

Classification schemes for carcinogenicity based solely on hazard-identification such as the IARC monograph process and the UN system adopted in the EU have become outmoded. They are based on a concept developed in the 1970s that chemicals could be divided into two classes: carcinogens and non-carcinogens. Categorization in this way places into the same category chemicals and agents with widely differing potencies and modes of action.

Another review was published in September, which summarized the results from four panels of experts that conducted similar reviews of the evidence about glyphosate:

Four Expert Panels have been convened for the purpose of conducting a detailed critique of the evidence in light of IARC’s assessment and to review all relevant information pertaining to glyphosate exposure, animal carcinogenicity, genotoxicity, and epidemiologic studies.

This review concluded that the associations made by the IARC lacked statistical strength and plausible mechanisms of action, and failed to show dose-response relationships. It is quite striking to fail on so many accounts. These panels found no biological plausibility as to how glyphosate could be carcinogenic, no finding of higher risks with higher exposures (suggesting causality) and no robust epidemiological correlations. With such absence of evidence, it raises the question of why IARC believed it had grounds to reach an opposite conclusion?

The synthesis from the four panels of the review above on glyphosate, its breakdown product AMPA,
and glyphosate-based formulations (GBFs) ends with:

The Panels concluded that the data do not support IARC’s conclusion that glyphosate is a:

“probable human carcinogen” and, consistent with previous regulatory assessments, further concluded that glyphosate is unlikely to pose a carcinogenic risk to humans.

As a European citizen and scientist, I have always looked to the World Health Organization as a reliable source of information on topics of global importance. Reading closer on many health and environmental topics, including those of the different sub-groups of the WHO, and the workings of the United Nations in general, I have realized that like any large organization, it is no stranger to internal politics. While its scope and track-record in many areas is commendable, the committees and conferences, and the numerous sub-topics it handles, are not immune to political and ideological influences. Biases, coupled with simple human failings, may on occasion undermine science, as sadly appears to have been the case with IARC.

IARC remains an outlier among various World Health Organization agencies. All other agencies within WHO – as well as the US EPA, the German BfR and the European Food Safety Authority – reach a converging, evidence-based agreement on the risks posed by glyphosate: trace amounts in food or even larger volumes used by farmers is highly unlikely to cause cancer. (Scientists do not use terms such as ‘does not cause cancer’, as almost any substance can be toxic under certain exposure conditions.)

World regulatory bodies need a uniform, clearly communicated consensus about how to determine cancer risk based on the most up-to-date scientific methodology. Without that standard, the public’s trust in national and international health organizations will erode as the science consensus comes under attack from the scientifically illiterate who are all too willing to use scare tactics to sway people and challenge regulatory authorities.

Iida Ruishalme, Finnish by birth and now a Swedish resident, is a cell biologist and science communicator, and author of the Thoughtscapism blog, which is where this piece originally appeared–here. She is also a fiction writer and a contributor to Genetic Literacy Project, Skepti-Forum, and Biofortified, as well as the cultural journal The Woolf. Twitter: @Thoughtscapism