Skepticism of genetically modified (GM) foods remains strong in America, although the embrace of the safety of biotechnology has grown dramatically over the past two years. Well, more than half of adults—57%—now say that GM foods are as safe or safer than non-GM varieties. A strong majority also believe that organic produce is healthier than conventionally grown varieties. That’s the headline takeaways from a new Pew Research Center survey.

The research also reveals a troubling lack of trust of scientists by most Americans, most particularly among young consumers, who are more likely than other adults to reject the overwhelming scientific consensus that GM crops are as safe or safer than organic or other conventionally grown foods.

In the survey, conducted May 10 to June 6, 2016, Pew asked 1,480 adults a number of questions about food, health and science and specifically about their views of what have come to be known as
genetically modified organisms (GMOs). Americans remain enraptured about organically grown food. 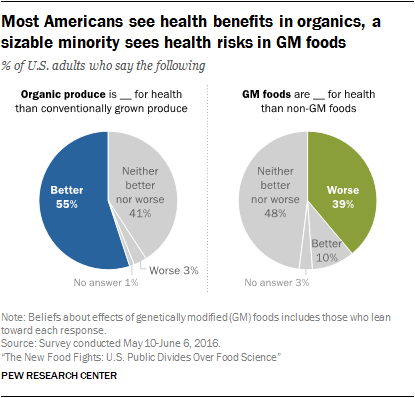 Some 55% believe that organically grown produce is healthier for them than conventionally grown varieties. (About 70% of processed food contains ingredients from GM crops.) However, only four in 10 say they buy organic products at least “some of the time”.

Those aged 18-49 are more likely than others to consider organic food to be healthier and 48 percent of Millennials (ages 18-29) believe that GM foods are worse for their health, compared to just 29 percent of Americans over the age of 65.

In what could be seen as good news for the science-minded and advocates of crop biotechnology, well more than half of Americans, 58%, now believe GM foods are as safer or healthier than non-GM 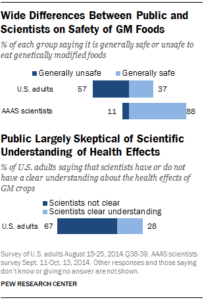 and GM foods (with 10% believing they are healthier). Some 39% consider GM foods worse for their health than non-GMO alternatives.

Those numbers are a sharp improvement in the belief in GM product safety from a PEW survey released in January 2015. At that time, a majority of the general public, 57%, believed that GM  foods were generally unsafe to eat, while only 37% viewed them as safe. Respondents in the prior survey were not asked if they thought GM foods might be healthier.

The latest survey also underscored the deep divide between scientists and the public over perceptions of GM safety. The 2015 survey found an overwhelming consensus among scientists at the American Association for the Advancement of Science that GM crops are safe–88%. That was a higher percentage than the 87% of AAAS scientists who believed that humans play a key role in global warming.

The divide grew last May–about the time when PEW began conducting this new survey—when the National Academies of Science, Engineering, and Medicine released a report stating that fears about the health risks from eating GM foods are unfounded. The independent scientists found no credible evidence linking GM foods to any diseases or health disorders. This isn’t the only time a major scientific organization of scientists has endorsed the safety of consuming GM foods. The World Health Organization, the American Medical Association, the European Commission, the Royal Society and the American Association for the Advancement of Sciences (AAAS) have all released statements affirming the safety to humans of GM foods. There are some 2,000 scientific studies that have found no ill effects on humans or animals from consuming GMOs.

What is driving consumer attitudes?

According to lead author Cary Funk, interest in food and nutrition issues was the main driver of the divisions in opinions on organic and GM foods:

The data suggest that people’s divisions are linked to their interest in food issues and how they think food consumption ties to their well-being. Their views are not driven by their political attitudes, their level of education, their household income, or where they live. 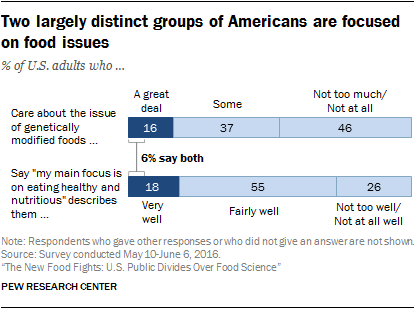 For example, 76% of those that care about GM food issues say that most or some of what they eat is organic compared to the 75% of those with little concern about GM foods who say they eat very little or no organic food at all.

Strikingly, overall most Americans do not feel strongly about the GM food issue as just 16% identified themselves to Pew as such—a fact that may surprise some people. After all, an overwhelming majority of Americans, in some surveys more than 90%, that they want GMOs labeled. However, other data support the finding that the issue is below the radar for most Americans. For example, a 2013 Rutgers University study found that when people were asked “what information do you want to be labeled on your food” (as opposed to asking “do you want GMOs labeled” as the question is normally phrased) only 7% cited GM ingredients. Similar results were obtained in a 2014 survey conducted by the International Food Information Council.

This is not to say the public does not care about the food they eat. On the contrary, 72% of US adults told Pew that they believed that eating healthy and regular physical activity was important to their health. But when it comes to food, most Americans just don’t think much about GMOs—unless a survey prompts them to.

Public does not trust scientists

Despite the exhaustive scientific analysis on GM foods and prestigious endorsements, according to the survey the public does not have confidence that science and scientists know enough about GMOs. Just 19% think scientists understand the health effects of GMOs, while 35% believe they do not understand the health effects of GM foods at all or well.

Scientists need to find a way to bridge this gap and educate the public on GMOs because the public does want their input—60% of US adults told Pew that scientists should play a major role in GM policy.