On January 17, 2017, Rachel Ray, a TV talk show host trusted by millions of families around North America, hosted a registered dietician, Keri Glassman, in her ‘Healthy or Hype’ segment. Glassman launched into an attack on the safety of conventional milk, which she claimed was made by pumping cows up with antibiotics.

“Whole organic milk, ‘that’s what I have at home that’s what I’m going to put in my cart.”

Ray chimed in her disapproval. In fact, by law, all milk, organic and conventional, is tested to ensure it is antibiotic free and any milk testing positive is discarded.

As a kicker, Glassman recommended only drinking soy milk made from non-GMO soybeans–despite the fact that no mainstream scientist believes there are any nutritional or health differences.

A Wisconsin dairy couple, Sam and Brittany Olson, watching the show, was dismayed about the show’s lack of understanding about science. Here are their concerns–which remain unaddressed by Rachel Ray or her show producers–first expressed in a blog post on their Facebook page that resonated with farmers and scientists.

We, a family of fourth and fifth-generation dairy farmers, were watching your show today over lunch. TV commonly serves as background noise while we talk about our plans for the week, so we don’t pay very much attention. However, something you said caused me to drop my jaw and subsequently my Dr. Pepper.

You told millions of adoring viewers to always buy organic cow’s milk, and almond “milk” if they wanted more calcium because it’s been fortified.

My husband and I milk anywhere from 30 to 45 cows depending on the time of year. The farm was purchased in 1902 by my Great-Great Grandfather. He moved his family here to Dallas, WI from Decorah, IA where he moved with his family from Norway in the late 1850s. My wife and I are the fifth generation to farm here. This will be the first time the farm has been passed down to a son; it has always gone to a daughter in the past.

This has always been a dairy farm with different breeds of cattle over the years. Along with the cows, we have had chickens and hogs at various times, mostly for our own use. My grandfather purchased seven Registered Holstein cows in the 1960s and our current herd has grown from those seven along with five more Registered Holsteins purchased in 2014-15 and now four Registered Jerseys purchased in 2015-16. Our farm is small with around 50 milking cows and 50 calves and heifers.

We grow most of our own feed raising hay, corn, and some small grains like oats or barley on about 250 acres (mostly owned.) Round Up Ready Corn has been planted for many years and we have planted double and triple stacked varieties. We pasture our cows and heifers May-October as the Northwest Wisconsin weather permits. We hope to incorporate no-till practices in the future.

We graze our cattle from May through October and our somatic cell count, a measure used to gauge cow health and milk quality, has been under 100,000 for the past few weeks. This is something we are VERY proud of and work very hard to maintain.

When they get sick, we use antibiotics to clear up the infection and rub down their udders with a 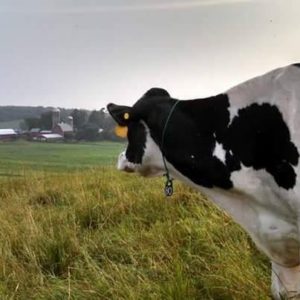 mint-based liniment to reduce swelling and help them feel better while discarding the milk until the antibiotic residue is gone.

On an organic dairy farm, this wouldn’t happen. Sure, they can use antibiotics, but they have to sell their cattle in order to keep the treated milk from entering the organic milk supply. We also plant GM hybrids to guarantee, as much as the weather and soils allow, a plentiful harvest come fall when it’s time to take the crops off and make feed for our cattle. We don’t plant GMOs because we’re evil, but because farming is hard and it’s one less thing to keep us awake at night.

And your bit about almond “milk” having more calcium…it’s fortified with calcium, but also with gellan gum, sea salt, vitamins and minerals (of which less than 2 percent of that beverage contains). Meanwhile, cow’s milk needs no additives unless you like chocolate milk or you’re like me and you like a little coffee with your cream.

I know you’re not going to see this. You’re in Hollywood in your mansion with your pit bulls, not caring whether you’ll be able to pay the bills next month or not worrying about what your next paycheck might look like, and could probably care less what some podunk farmer’s wife in Dallas, Wisconsin could think about one little blurb on your show that aired today. However, because you have such a large audience, I encourage you to speak carefully and do your research. Your fans – my customers – are watching. Thank you.