Buying organic food to avoid pesticides? You may want to reconsider

[Editor’s note: The Environmental Working Group released its “dirty dozen” list of pesticides on March 8, 2017. EWG is highly critical of conventional agriculture, claiming farmers’ use of ‘dangerous pesticides’ poses substantial health risks. The organization urges consumers to buy organic food, which it claims uses less pesticides. However, this is not accurate because organic fruit and vegetable farmers use non-synthetic pesticides, which can be more toxic to humans and beneficial insects than targeted synthetic pesticides. Organic pesticides are often untested.]

Organic might not mean what you think it means. Consider recent data generated as part of the USDA’s Pesticide Data Program (PDP) — This isn’t surprising information. It echoes results from previous PDP testing and with more comprehensive testing of organic samples in 2001-11 by the USDA and 2011-13 by the Canadian Food Inspection Agency. What is interesting is that while the incidence of residue detection is somewhat lower for organic, the very low levels of chemicals found are quite similar to the low levels detected on conventional samples. The 2015 PDP study found residues of 68 different pesticides, pesticide metabolites, or plant growth regulators on organic fruits and vegetables.

Chemicals detected on organic samples in the 2015 PDP

For 37% of these chemicals the average residue on organic samples was actually higher than the averages on conventional, but still very small.

What really matters is that the levels detected for both kinds of produce are below the “tolerances” that are set by the EPA and those tolerances already reflect a generous safety margin.

So, what these data really tell us is this:

“Yes. Skilled analytical chemists can detect tiny amounts of synthetic and natural pesticide residues on organic and conventional produce. In both cases, the levels that are found are below to well below any threshold of concern. Our regulatory system is working. Those who grow our food are well trained and are following the rules designed to both enable crop production and protect the public. Enjoy your safe, healthy, delicious options!”

Background on the PDP

Each year the USDA gathers and analyzes around ten thousand samples from the mainstream US food supply – mainly fruits and vegetables. In the sampling process, USDA ends up including some items labeled as USDA Organic (349 samples in 2015, 4% of the total). USDA labs then look at all the samples for residues of crop protection chemicals using extremely sensitive analytical methods.

USDA provides both brief and detailed summaries of this information, but I appreciate the fact that the raw data is transparently available to the public so that I can look through it myself (it is bit challenging because there is a two million+ row main table, a 10 thousand row sample table, and 18 reference tables). I looked in detail at all the pesticide detections and also looked at the testing results for produce samples that were being sold with the organic claim.

As with the overwhelming majority of samples, the residues detected on the organic items are at levels below the conservative “tolerances” that are set by the EPA. Yes, residues are present. No, they are not a safety problem. However, the presence of residues does conflict with what many consumers have been led to believe about the difference between organic and conventional.

Many people think organic means “no pesticides.” That is simply not true. Organic farmers can and do use a range of allowed pesticides because they too have to deal with pests. The list of organic-approved pesticides is not based on safety criteria but rather on whether or not they can be considered “natural.” Again, in spite of much misleading marketing, “natural” does not automatically mean safe. In fact, the USDA which is in charge of organic certification specifically states on its website that “our regulations do not address food safety or nutrition.”

As with all pesticides and other crop protection products, it is the EPA which assesses which pesticides can be used safely, and within what constraints.

So what sorts of residues are found on the organic samples? The most common detection is of an insecticide called spinosad. That is an effective control for a variety of caterpillar pests and is produced through a microbial fermentation process, thus allowing it to qualify for use in organic (see chemical structure of one of the spinosyns below). Just to be clear, the spinosad products are produced by the Dow chemical company. 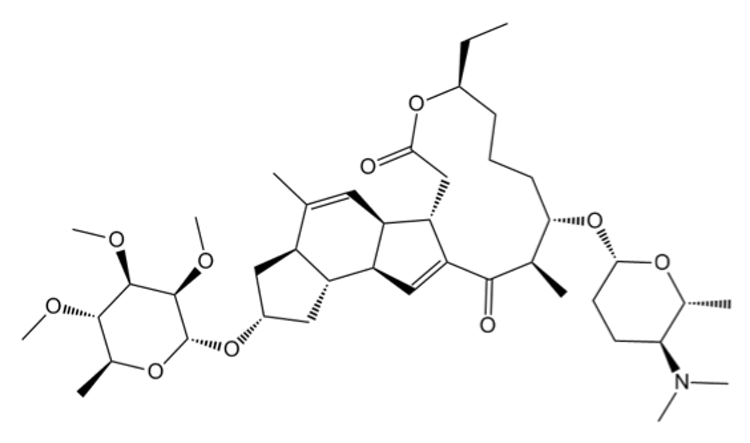 Conventional farmers also make good use of this and other natural products. Spinosad is really the only natural product pesticide that is detected in the USDA’s monitoring program. Other widely used products like sulfur, petroleum distillates, copper salts and microbial products can’t be monitored using the same, highly sensitive and cost-effective tools that allow the USDA to generate the more than two million test results they generate each year. If specific tests were conducted for those natural products, the number of residues detected per organic sample would probably be much larger – but it wouldn’t really change the overall conclusion that these foods are safe to enjoy.

Other than spinosad, the remaining 80.2% of residues detected on organic are of “synthetic” chemicals. 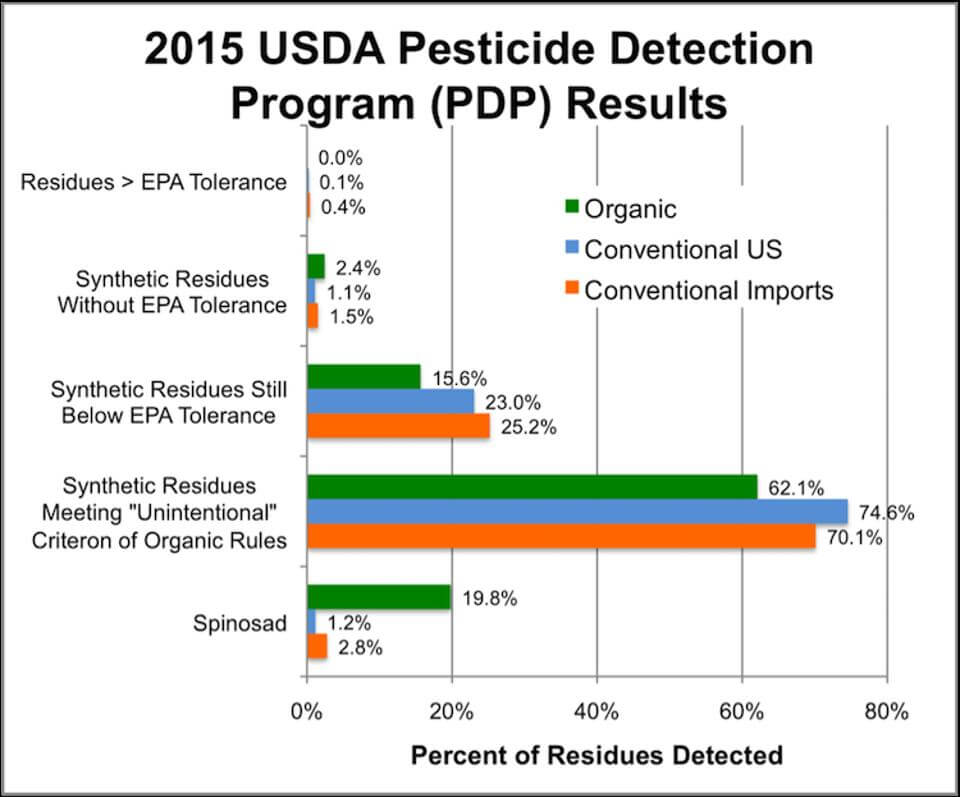 While very few of the synthetic materials used in agriculture today are intrinsically very toxic to humans, they are theoretically not supposed to be present on organic because they are not on the list of approved, natural options.

There is, however, a rule in the organic certification system that any residue present at 5% or less of the USDA tolerance will be considered “unintentional” and thus not a reason to deny organic certification. 62.1% of the 2015 organic detections met that criterion, but interestingly so do 74.6% of the detections on non-organic samples from the US and 70.1% of the detections from imported, non-organic samples. Not so different.

Another 15.6% of residues detected on organic technically violate the organic rules by being over 5% of EPA tolerance, but such residues are still fully safe based on EPA criteria. That same safety criterion applied to 23.0% and 25.2% of conventional US and imported samples respectively. For both organic and conventional there are a few detected residues of products that don’t have a specific, assigned tolerance for the crop in question. These are generally very low-level detections, so while they represent technical violations they are not of real concern and once again, similar for organic and conventional (average “no tolerance” detection for organic 23.7 parts/billion, average for conventional imports 19.8 ppb, and average for US conventional 17.2 ppb).

To reiterate, what this transparent public database tells us is that our food supply is safe from the perspective of pesticide residues. This means that our regulatory system is working and that thousands of farmers in the US and elsewhere are doing a great job of managing pest damage while still protecting our health. The data also tells us that there are some striking similarities between organic and conventional when it comes to residues. What the data also tells us is that as consumers we should reject some of the misleading marketing and advocacy efforts of certain irresponsible elements of the organic industry. Instead of giving in to those fear-based campaigns we should feel the freedom to choose healthy and delicious produce using important criteria like freshness, flavor, quality and affordability.

A version of this article appeared at Forbes as “Organic Might Not Mean What You Think It Means” and has been republished here with permission from the author and the original publisher.