Once upon a time in the 20th century, agriculture was transformed by a scientific innovation, involving the creation of new plants that was based on a very simple genetic concept. And this innovation, perhaps more than any other, ushered in an unprecedented boost in productivity, and was responsible for the creation of industrialized, large-scale agriculture, otherwise known as “Big Ag.” And it is recognized as perfectly safe.

What was the innovation? No, it’s not the advent of advanced bioengineering of crops, although that may one day be seen as an equally momentous leap. The innovation that created modern agriculture was hybridization, or F1 hybrids for short.

While it’s a simple genetic concept, creating a good F1 hybrid can be astonishingly complicated. Getting to a successful F1 can take years (and millions of dollars).

It isn’t easy getting to F1 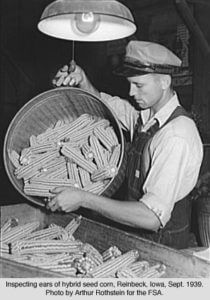 The F1 (first generation) hybrid is a product of Mendelian genetics. Start with two parents that are homozygous for a trait you like, such as color or taste (let’s say, AA and aa, BB and bb). Breed the homozygous parents (aka, F0), and all the offspring have the trait you want (Aa or Bb) in that first generation (F1) plant. The main difference between open pollination and this method is that you start with inbred homozygous parent plants, and carefully control how pollen gets to the offspring.

Eric Bjerregaard, a papaya and tropical fruit farmer in Gainesville, Florida, has spent many years trying to develop an F1 hybrid papaya from saved seeds. Florida is a warm climate, but not what tropical papayas are used to.

Bjerregaard has been trying to select for “stocky plants with good flavor and precociousness,” he has 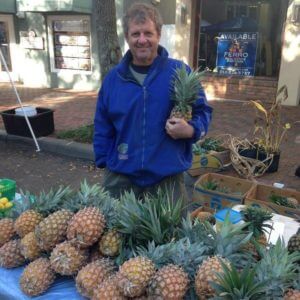 said. Some of his new plants are tolerating the state’s cooler, cloudier winters, too. What he has been doing is the most important step of developing the hybrid—finding the right parents. Once these parents are inbred — possess homozygotically the traits you want — then there’s a better chance of hybrid vigor, the type of offspring that has all of the desired traits, all in one plant.

This is not easy. It requires very careful control of pollination, ranging from placing sleeves on the male and female parts of a plant (such as corn), spacing parent plants apart, and even some sophisticated genetics (which may or may not include recombinant “genetic modification”).

Take canola, for example. Dale Burns, a canola plant breeder with Monsanto in Lethbridge, Alberta, Canada, spent 10 years arriving at a satisfactory canola F1 hybrid. Because canola (Brassica napus) is self-pollinating as well as cross-pollinating, breeders first had to make one parental male sterile. This forced the plant to breed with another parent (and prevented self-pollination).

One way to do this is cytoplasmic male sterility (CMS), which uses a sterile cytoplasm surrounding the cell nucleus of the male line that’s infertile. The sterile male then crosses with the fertile female to produce a sterile offspring. Then, that sterile offspring is matched with a fertile “restorer” cell line, producing the desired F1 hybrid. This method is licensed by a French institute, and is an improvement of an invention by Japanese scientists made in the 1970s. 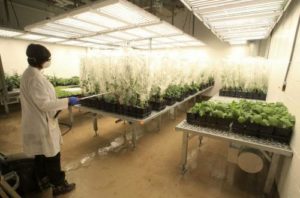 Another way is to isolate a gene found from soil bacterium and insert it into the cell nucleus of the female parent. Then a restorer line restores male fertility and the F1 hybrid is born.

These first steps are made merely to bypass the complications from self-pollination. Once a trait looks like one worth selecting for, the sterility hybridization process is used to breed that cell line. This requires thousands of hybrid crosses, which are evaluated until a handful of new variants appear that carry the desired traits. The method takes years, not only because of this long evaluation process, but also because non-desirable traits need to be avoided as much as desirable traits need to be preserved.

“The increased vigor is real. The increase in yield is real,” said Burns.

Hybridization rescued a number of crops from yield stagnation, according to the U.S. Department of Agriculture. In the early 20th century, corn was the United States’ primary field crop in terms of acreage. But yields remained fixed until the 1930s. The F1 hybrid broke this stagnation, and yields soared. And since the 1960s, hybrid corn has made up more than 95 percent of all corn planted in the U.S. “Hybrid corn seed had higher yield potential, greater uniformity in maturity, and resistance to lodging, making large-scale mechanization possible,” the USDA noted.

A radical, but mainstream and powerful, part of the organic community is opposed to applying advanced genetics to agriculture. The Organic Consumers Association, which is also known for its claims that vaccines are dangerous and quack homeopathy treatments are effective, has pushed to change the status of certain F1 hybrids, claiming that they’re not different from genetic modification–GMOs. The OCA has petitioned the USDA, asking the National Organic Program to remove CMS, the process Monsanto used to develop its new canola hybrid, from the list of allowable organic practices. The reason? Because these hybrids were made through a process called mutagenesis. A process pioneered in the late 1920s, new foods were created by subjecting seeds to either radiation or chemicals, which created random mutations, some of which ended up being beneficial. Some hybrids, but by no means all, have been created through this process. 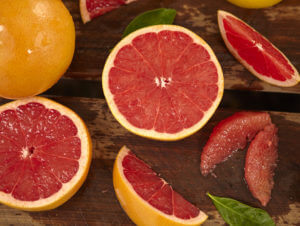 In 1929, farmers stumbled on the Ruby Red grapefruit, a natural mutant. Its flesh eventually faded to pink, however, and scientists fired radiation to produce mutants of deeper color — Star Ruby, released in 1971, and Rio Red, released in 1985. The mutant offspring now account for about 75 percent of all grapefruit grown in Texas.

Today there are more than 3,200 approved mutagenized plants and crops, including grapefruits, Vietnamese rice and durum wheat used in making premium pasta — all of which can be and are sold as organic. Why? Because the process, while far less precise than genetic engineering in which one gene is changed, mapped and tested — instead of thousands of genes — is perfectly good food. Changing genes is just not that controversial a process. Except to organic extremists, who recognize that embracing Ruby Red grapefruits and gourmet pasta are undermining their argument against GMOs. Here is that they now say about the thousands of foods approved and sold as organics:

Mutagenesis is a method of plant breeding that involves subjecting plants to radiation, or dousing them in chemicals, in a way that scrambles their genes in order to produce new traits. The goal is to produce plants suitable for modern industrial agriculture, where crops are grown in vast monocultures with the aid of chemicals and machinery.

Mutagenesis doesn’t involve transferring the genes of one species into another. But just like genetic engineering, mutagenesis is an imprecise and uncontrolled process. The intent may be to produce a specific, desired trait. But there is no way to predict or control the unintended consequences.

This sounds convincing, unless you pair the comments next to what it takes to develop a F1 hybrid, including an organic F1 hybrid.

And, in fact, in 2013 the USDA National Organic Program split hairs a little bit: the agency decided that certain cell fusion hybrids were permitted under the NOP, as long as they did not involve recombinant DNA technology, and did not involve cells from another taxonomic category.

One of the reasons for developing genetic recombination was to reduce unwanted characteristics that still occurred with F1 hybrids, and other uncertainties that revealed themselves during the long process of producing that hybrid. When comparing, for example, removing the male tassels of corn stalks so that male pollen didn’t cross with the silks in the female ear of the plant, the difference between that type of breeding and inserting DNA in a point in a plant genome to create a characteristic fades.

As Montana Extension Agent Timothy Fine recalled watching an agricultural expert try to answer “what’s the difference between hybrids and GMOs?” his own answer to himself was: