Epigenetics Around the Web: Spinach, turnips likely won’t protect you from air pollution, and more

Nicholas Staropoli | March 20, 2017
This article or excerpt is included in the GLP’s daily curated selection of ideologically diverse news, opinion and analysis of biotechnology innovation.

I would doubt whether it gives a prediction of life expectancy … that is by itself accurate to any useful extent.

— John Greally, director of the Center for Epigenomics at Albert Einstein College of Medicine

Vitamin B protects against air pollution?

How can we minimize the health impact of air pollution? Invest in new clean burning technologies? The BBC says to eat more spinach.

According to the World Health Organization, 92 percent of the world’s population lives in places where air quality is below WHO standards. Air pollution is linked to numerous health maladies, such as cardiovascular diseases, stroke, chronic obstructive pulmonary disease and lung cancer. The WHO also reports that nearly 3 million deaths a year are linked to exposure to outdoor air pollution.

A recent article, titled “Vitamins may have ‘protective effect’ against air pollution” on the BBC site discussed this problem. The story centered around a February 2017 study in Proceedings of the National Academy of Sciences. The study, lead by Jia Zhong from Harvard School of Public Health, investigated epigenetic changes in immune cells that are linked to exposure to air pollution. The results showed that people who took vitamin B supplements were protected from these changes.

“I think that B vitamins are a likely hope that we can potentially utilize as an individualized treatment to complement the policy regulations to minimize the impacts of air pollution,” said Zhong.

However, there are several reasons to doubt these findings. First, of all the study was done on just ten people, a sample size that is far too small to make important conclusions. The individuals in the study were also exposed to levels of artificial pollution and even the authors admit the doses of vitamin B were excessive. 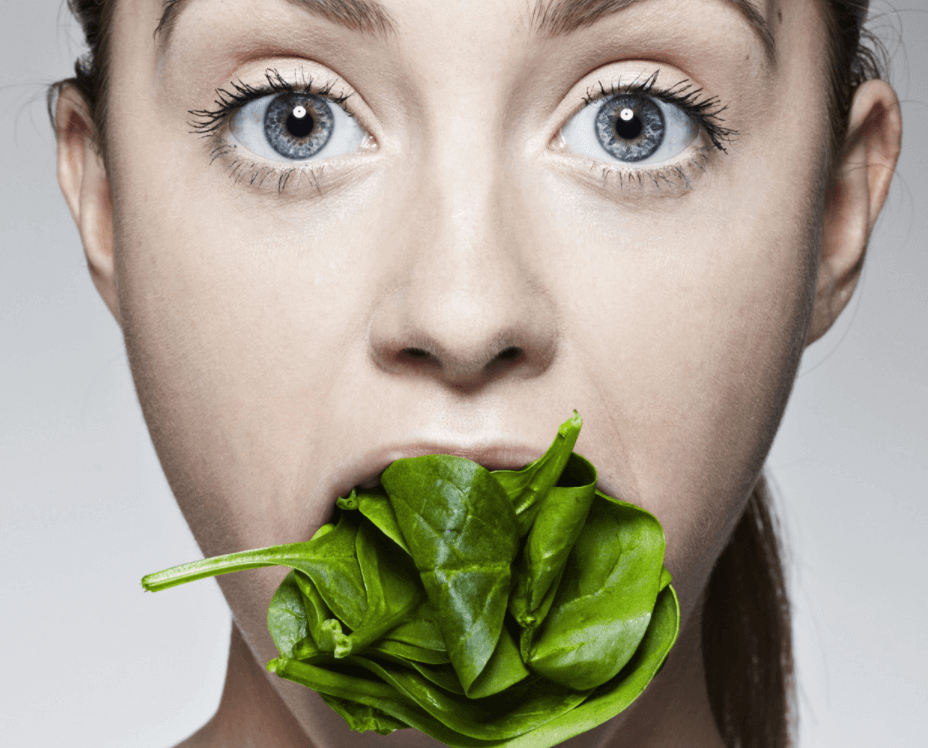 The study also examined epigenetic changes on mitochondrial DNA, a part of the cell that is important for producing cellular energy. However, mitochondrial epigenetics is a very poorly understood process and controversial topic. A recent study in Nature found that most studies of mitochondrial methylation may be completely unreliable.

To their credit, the BBC story, authored by environmental correspondent Matt McGrath, points out some of the shortcomings of this study.

But McGrath exercised poor journalistic judgment in deciding to cover this study. By publishing a story on such a weak study in a large outlet, it elevates the study’s importance. Thousands of studies are published in science journals every month, so the BBC’s decision to publish a story is a signal to the reader that it is significant. But this study was too weak, too small and relied too heavily on controversial science to be elevated to the public’s attention. Journalists covering science need to be more responsible when deciding what to cover.

In the March 6th Epigenetics Around the Web, I dissected a plan by the life insurance company GWG Life to use epigenetics data to determine people’s life expectancy. While there have been several studies that have found some correlations between changes in epigenetic marks and health, I don’t believe we know enough about what causes these changes to use it to make important decisions.

The company calls this ‘precision insurance.’ I called it a “serious miscarriage of science.” Needless to say, the company was not happy, tweeting in response: 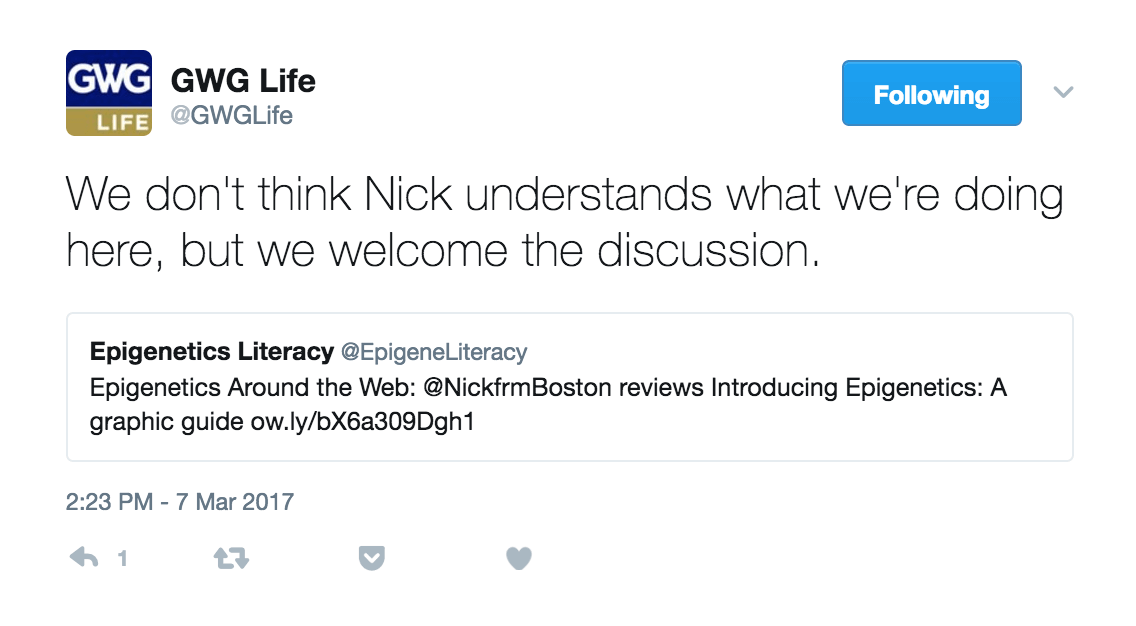 Unfortunately, for GWG Life, I’m not alone in my disapproval. Numerous scientists and communicators took to Twitter to criticize the company. Cath Ennis, science writer whose recent book Introducing Epigenetics: A Graphic Guide, was profiled on ELP, was shocked: 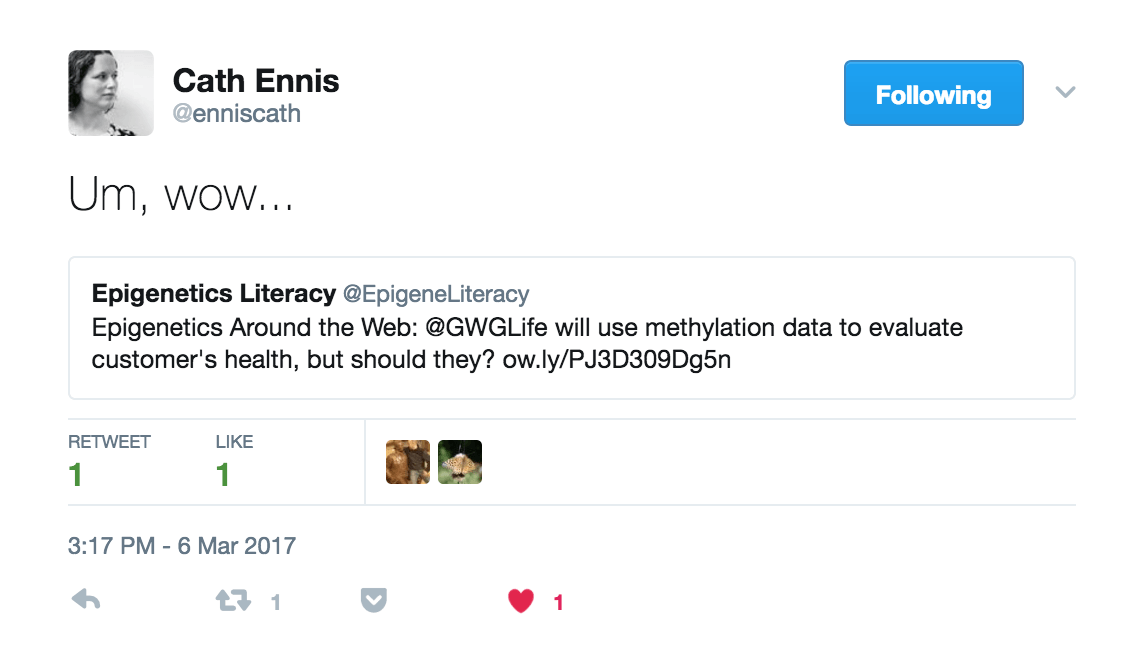 John Greally, director of the Center for Epigenomics at Albert Einstein College of Medicine, was the most critical calling it “grotesque:” 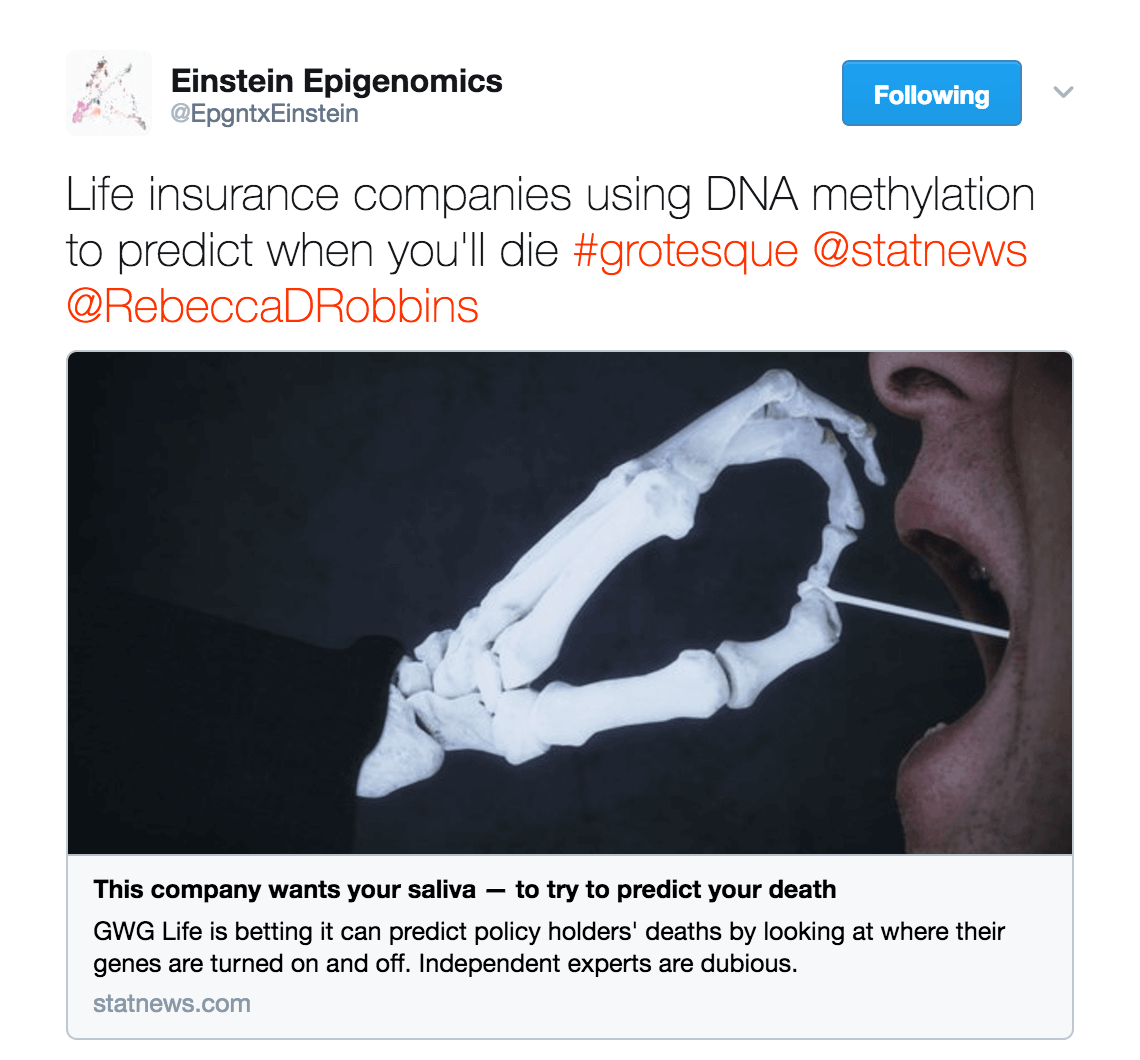 Greally also told STAT, “I would doubt whether it gives a prediction of life expectancy … that is by itself accurate to any useful extent.” Arguably the most damning comments are from Steve Horvath, UCLA epigeneticist, who developed the algorithm (often called the ‘epigenetic clock’) that GWG used to predict life expectancy and health. Horvath refused to endorse their decision to use his clock.

On March 12, New York Time’s columnist Nicholas Kristof wrote that men should be worried about their sperm health because of environmental toxins and endocrine disruptors. Geoffrey Kabat, cancer epidemiologist at the Albert Einstein College of Medicine, said that Kristof’s article is not supported by science.

Beyond mutations: How our view of cancer’s origin has evolved

Scientists used to think cancer was caused only by genetic mutations that were either inherited or caused by an environmental trigger such as smoking. But our understanding of cancer is evolving and now it appears that epigenetic changes can cause cancer too.

How one company is using epigenetics to build hardier crops

University of Nebraska epigeneticist Sally Mackenzie is a pioneer in epigenetics in agriculture. Her lab has been able to epigenetically improve plants—including soybeans, tomatoes and sorghum—which have shown increased yields and stress tolerance.