Three months after the birth of a child, most parents are worried about getting the baby to sleep through the night or wondering when to start solid food. But Layla Richard’s parents had bigger concerns. Their daughter suddenly became ill and stopped eating. That’s when doctors discovered that Layla had acute lymphoblastic leukemia (ALL). None of the standard treatments worked. Even the heroic treatments couldn’t quell her cancer. But parents Lisa and Ashleigh Richards refused to give up. From the Guardian:

Despite several rounds of intensive chemotherapy, Layla still had leukemia cells in her body when the transplant was performed, and seven weeks later the disease returned. Soon after, doctors told the family there were no other treatments that might cure Layla and suggested palliative care. But Layla’s parents, Lisa and Ashleigh, insisted that the doctors keep trying. “We didn’t want to accept palliative care and give up on our daughter, so we asked the doctors to try anything for our daughter, even if it hadn’t been tried before,” Lisa said.

So doctors at Great Ormond Street Hospital in London gave Layla an experimental treatment that had only been tested in mice. They transfused Layla with genetically engineered immune cells from a female donor. Within 28 days she was cancer free. A second child was also treated a few months later. She also is cancer free. Kristen Brown at Gizmodo details the procedure:

The treatment entailed collecting blood from donors, isolating healthy immune T-cells, and then using a genetic engineering tool known as TALENs to deactivate certain T-cell genes that would normally cause them to be rejected once transplanted into a leukemia patient. The T-cells were also engineered to attack cancer cells directly.

This kind of engineered T-cell immunotherapy has been around for a few years. There are several, small human clinical trials ongoing. One trial was canceled earlier this year because of the deaths of three patients caused by side effects of the treatment. However, these therapies all rely on taking T-cells from the patient, engineering them to attack cancer, and reintroducing them into the patient’s system. The process is tedious and takes a relatively long time. But the girls in London got their engineered T-cells from a donor. And gene editing was used not just to put cancer-receptors on the T-cells, but also to erase the immunological signature that causes rejection when cells are transplanted from donor to patient. That significantly cuts the work, and potentially the costs, of this kind of treatment, writes Antonio Regalado at Technology Review:

The ready-made approach could pose a challenge to companies including Juno Therapeutics and Novartis, each of which has spent tens of millions of dollars pioneering treatments that require collecting a patient’s own blood cells, engineering them, and then re-infusing them….In the off-the-shelf approach, blood is collected from a donor and then turned into “hundreds” of doses that can then be stored frozen, says Smith. “We estimate the cost to manufacture a dose would be about $4,000,” she says. That’s compared to a cost of around $50,000 to alter a patient’s cells and return them. 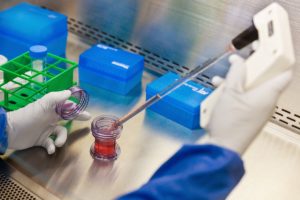 The study also highlights an interesting paradox. T-cell immunotherapy is considered one of the most advanced forms of precision medicine. Taking an individual’s cells, engineering them to fight their specific cancer type then giving them back to the patient are all ways of matching genes to treatment. The safe use of donor cells used to cure these girls could be a back step for precision medicine. The more universal approach worked better in this case. And that begs the question, have we become overly focused on the individualized nature of precision medicine and missed easier, better and cheaper solutions along the way?

The treatment did have some side effects which the doctors described as limited. The second child who was treated developed graft versus host disease. “The team did note that the first young patient did indeed have a bad immune reaction to the treatment two months after it took place, but after a round of steroids and some bone marrow transplantation, she’s now doing well,” IFL Science reported.

The girls will be closely monitored for signs that their cancers are returning or that there is some residual side effect of the T-cell treatment. But as of late January 2017, both children remained cancer-free 18 months and 12 months after the treatment.

Meredith Knight is a frequent contributor to the Genetic Literacy Project and freelance science and health writer based in Austin, Texas. Follow her @meremereknight.