Have you heard of Aflatoxin? It is a major risk factor for cancer in the developing world.  Aflatoxin is a natural chemical produced by a fungus. It is highly toxic and is a very potent carcinogen in animal studies. Those of us in the developed world are fortunate in that a number of safeguards keep aflatoxin out of our animal feed and human food supplies. Unfortunately, in the developing world, people are not so well protected. In those regions aflatoxin contaminated foods are responsible for many poisonings, and high cancer rates. Researchers in Arizona have recently published a paper about a biotech crop breakthrough that could dramatically improve that situation.

Aflatoxins are chemicals produced by certain fungi that infect food crops (Aspergillus flavus, Aspergillus parasiticus). The biggest developing world risks are with maize (corn), and groundnuts (peanuts) – staple, subsistence crops in parts of Africa and Asia. When insect feeding damages crops and/or through drought stress, they are most susceptible to infection by these fungi. The infections can continue to develop after harvest, particularly under less than ideal storage conditions. 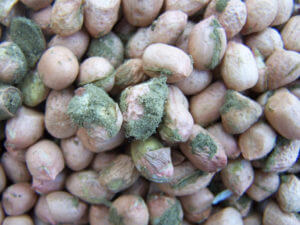 In an article published in the prestigious journal, Science Advances, five scientists from public institutions in Arizona described how they genetically engineered corn to prevent its contamination by aflatoxin. For this article I spoke with Monica Schmidt of the University of Arizona. Schmidt’s team engineered the corn to make three small RNA molecules designed to specifically bind to parts of a particular RNA produced by the fungus. These small RNAs made in the kernel cells are able to move from the corn into the invading fungus. Once there, they trigger a mechanism in the fungus cells that blocks the production of a key enzyme required by Aspergillus to make aflatoxins. Because this approach involves three separate bits of targeting RNA, it is extremely unlikely that the fungus could mutate in a way to get around this blockage. The corn plants modified this way are effectively protected from contamination with aflatoxin. This kind of corn could give developing world consumers a much safer food supply.

This work was funded by the Gates Foundation, which also funds work to develop corn that is resistant to insect damage and drought. In combination with the aflatoxin protection, this constitutes an ideal integrated solution for that critical crop. This is also a proof of concept for taking a similar approach with peanuts. The intention is to make this technology freely available for breeding into the local crop varieties that are best adapted to the regions in question.

What about the developed world? It would actually make a lot of sense to add this technology to the diverse toolset that we already use to keep aflatoxin out of our corn and peanuts. There are also other crops that could benefit from another protection strategy from aflatoxin – notably tree nuts like almonds, pistachios, walnuts and pecans. Aflatoxin can also be an issue in cottonseed that is used as an animal feed. The same biotech strategy may well work with other fungal toxins that can be an issue in other crops.

The world’s consumers can derive great health benefits from the further development of this technology. This is definitely one to track and to encourage.

A version of this article appeared at Forbes as “New Biotech Crops Could Dramatically Reduce Cancer Risk In Developing Countries” and has been republished here with permission.