Users of a multiplayer online puzzle game could become the latest front in a growing effort to defeat a deadly, persistent, and globally widespread agricultural contaminant that causes liver cancer and has been linked to stunted growth in children. They would join a handful of other projects in the past few years designed to weaken or eliminate the compound, called aflatoxin, or the crop mold that generates it.

Success in this arena has been elusive but could prevent between roughly 25,000 and 155,000 cases of liver cancer annually, most of which occur in sub-Saharan Africa, Southeast Asia, and China, according to an estimate published in 2010. About 4.5 billion people in developing nations are chronically exposed to the toxin through the food they eat, according to the Centers for Disease Control and Prevention.

The latest foray seeks to exploit the ingenuity and creativity of thousands of puzzle solvers at the website Fold.it, a crowdsourcing project in which participants seek new and efficient ways to fold selected virtual proteins, which scientists might then be able to replicate in the real world as a way of targeting diseases.

The site recently unleashed the first of a series of puzzles designed to optimize the structure and shape of an enzyme that could degrade or neutralize aflatoxin. Within several months, researchers at the Massachusetts-based biotech firm Thermo Fisher Scientific plan to work with the top puzzle solutions to synthesize hundreds of genes that can make the new versions of the enzyme.

Then biochemist Justin Siegel of the University of California, Davis, and his lab team are set to harvest proteins from the genes and test for activity against the type of aflatoxin that is most carcinogenic. Ultimately, the enzyme could be induced genetically in crops or applied via a wash or spray on crops after they are harvested, Siegel said.

“Using enzymes to treat food to modulate flavor and texture and nutritional properties is a very old, well-established industry,” Siegel said. “So it’s like, let’s develop an enzyme to treat this food. So instead of modulating the flavor or texture, it’s detoxifying it.”

Another tactic in the battle against aflatoxin has emerged from decades of work in the lab of Peter Cotty, a research plant pathologist with the U.S. Department of Agriculture and an adjunct professor at the University of Arizona. He and colleagues have developed a biological control technology to manage aflatoxin and have registered strains of the Aspergillus flavus fungus that do not produce aflatoxin. These more benign strains can be applied to crops and effectively out-compete the toxin-producing strains. 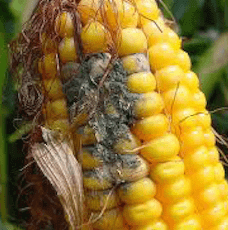 Upgrades to agricultural practices might help too. Pummi Singh, a graduate student working with Cotty, recently compared dried red chili samples purchased in the United States with similar samples purchased in Nigeria for the presence of aflatoxin and the culprit fungus. In findings published in the October issue of Food Control, she reports that significantly more of the samples from Nigeria contained aflatoxin and the fungus, compared to those from the U.S., which is not surprising. Regulations designed to control aflatoxin and other dangerous food contaminants are well enforced by U.S. federal agencies, whereas such local regulations in Nigeria are not well enforced, she said.

But the aflatoxin and fungal count levels in the U.S. chilies were not that much different than those from the chilies from Nigeria from a health standpoint. Singh found that 93 percent of the chili samples from Nigeria were under the safety threshold of 20 parts per billion, whereas 98 percent of the U.S. samples were below that level. The finding raises questions about the cost-effectiveness of U.S. regulation enforcement for food safety. Aflatoxin testing and management in the U.S. costs tens of millions of dollars annually.

Practices such as airtight packaging, temperature controls, and reduced exposure to soil and open air can help to control fungus and aflatoxin in chilies, Singh said. And biological control technology also might perform well and be more cost-effective, she added.

Along with the development of biological treatments and chemical approaches, such as the Foldit-inspired enzyme, Siegel agrees that improvements to agricultural practices are necessary in the effort to overcome aflatoxin. But he hints that they might not be feasible for all crops and in all parts of the world. “If you can get a good cold storage base, good agricultural practices and humidity controlled worldwide, sure, you don’t need the enzyme,” he said, “but good luck.”

Robin Lloyd is a freelance writer, editor and educator, as well as a contributing editor for Scientific American and an adjunct professor at New York University’s Science, Health and Environmental Reporting Program.

This story originally appeared on Undark Magazine as Online Gamers Puzzle Over Deadly Crop Contaminant and has been republished here with permission.