Politics of obesity: Democrats more likely to blame genetics for being overweight

In 2015, the Center for Disease Control reported nearly 71 percent of United States adults were overweight, more than one third obese, and 17 percent of youth were obese.

Do Americans think being overweight is based on the uncontrollable dictates of biology? In a national survey we asked American adults why some people were significantly overweight or obese. 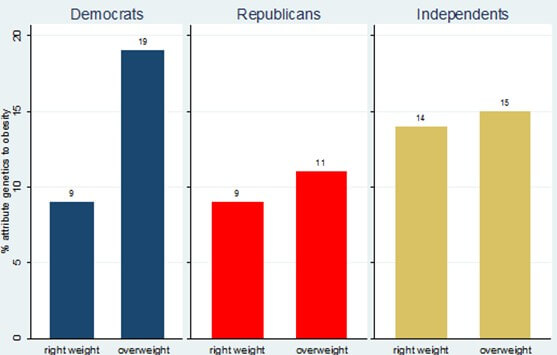 Overweight respondents are more likely to favor genetics, compared to the about right weight respondents, but we were curious whether this was true among Democrats, Republicans and Independents. It would seem that overweight Republicans are cross-pressured–their weight predisposes them toward genetic explanations but eating and lifestyle habits is favored among their party. This is not true for overweight Democrats—weight and party work in the same direction. Democrats and overweight people are both prone to genetic explanations.

The GLP aggregated and excerpted this blog/article to reflect the diversity of news, opinion, and analysis. Read full, original post: Democrats are more likely than Republicans or Independents to blame genetics for obesity – including their own.