If you needed a kidney, liver, or heart transplant, would you take your chances on the waiting list, or accept an organ from a pig? Not a pig’s organ, but a human organ grown inside a pig’s body. It would function just like any organ from a human donor. And your immune system would see the transplant as if it were from a human — or even better. The new organ wouldn’t have developed from specially-engineered human stem cells, rendering the usual organ matching process obsolete.

Some people have ethical concerns with the idea of taking the life of an animal. But the reality is that 8,000 people die each year in the United States, simply because not enough organs are available. There may be a day when human organs from pigs will fill that organ shortage gap. Certainly, the  technology and science required to accomplish the task are advancing quickly, pushing a host of issues onto the public’s radar. Earlier this year, the issue attracted considerable attention when researchers announced the successful creation of a chimera, with cells from both a human and a pig. The chimeras weren’t allowed to develop beyond the fetal stage, but the success of the project has raised hopes about the potential for organ harvesting in the future.

Growing an organ from the ‘wrong species’

There are a few different paths that can be taken to grow human organs in another animal, but the most promising one involves stem cells, specifically induced pluripotent stem cells (iPSCs), which were used in the experiment reported earlier this year. There have been other successes. Researchers have been able to make a mouse embryo develop with a rat pancreas in place of the usual mouse pancreas. After the rat is born, the pancreas can be removed and transplanted into a rat whose immune system does not reject it. It’s also possible to do the reverse, resulting in a rat born with a mouse pancreas, which then can be transplanted into a mouse. 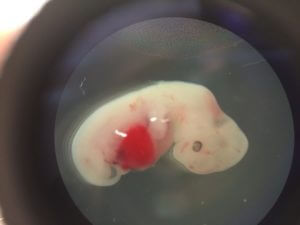 The process begins with genetic engineering on embryos that were somewhat tricky back in 2010. But the advent of CRISPR genome editing has made it a lot easier today. In the rodents, CRISPR is employed to delete a gene called PDX1. Without this gene, embryos do not develop a pancreas. Instead, there is just a little space where the organ is supposed to be. Scientists then fill that space with iPSCs. This causes a pancreas to develop matching the species of the animal that supplied the iPSCs. If you inject mouse iPSCs, for instance, a mouse pancreas develops. If you inject rat iPSCs, a rat pancreas develops.

The research has focused on mice and rats, but if you were to inject iPSCs, from something else, a squirrel or rabbit for instance, this should grow a pancreas appropriate for transplantation into a squirrel or rabbit, respectively. The species of the iPSCs determines the species of the organ, whereas the location of the empty space determines which particular organ develops in the host animal.

The trick now is figuring out how to scale up the process to create a pig with a human pancreas inside. No one has gone all the way yet, but the first step has been realized both in Japan and in the US. Pig embryos lacking a pancreas have been created using the same method that’s been proven in rodents. A single gene is deleted using CRISPR editing, and so the challenge is the next step —  making a human pancreas grow in the empty space. A team in the Department of Animal Science at University of California at Davis is working on it, with strategies similar to those used in rodents. The UC Davis team is led by Pablo Ross, who anticipates reporting progress in the scientific literature by the end of the year, but progress has been slow because ethical concerns make for limited funding.

Related article:  Male pregnancy may be closer than you think

Objections and concerns about the research vary from reasonable cautions about animal welfare to alarmist beliefs that the government and scientists have created half-human, half pig chimeric beings, consisting of human brains trapped within pig bodies. 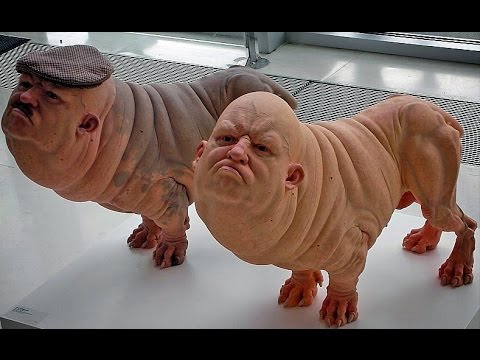 You can find pictures like this one in articles and videos with titles often beginning with “The truth about….”, but the stories about human pig chimeras have been greatly exaggerated. Currently, photo editing technology is far ahead genetics.

Nevertheless, there are concerns floating around that research like the studies underway at UC Davis could –unwittingly– produce some kind of humanized brain in a pig. How? The idea is that some human iPSCs could wander from the injection site to the pig embryo’s developing brain and somehow give it human-like consciousness. The possibility once led to a National Institutes of Health (NIH) to ban research on human-non-human chimera under NIH funding, but NIH is preparing to lift the ban.

How realistic are the concerns? Probably, not very realistic at all. In earlier research, Ross and his team found that iPSCs from one species tend to be out-competed by stem cells of the host embryo — except when there’s a space open because an organ is absent. Thus, should any human iPSCs find their way to the brain of pig embryo, they would not likely change the normal brain development. Furthermore, limitations on the skull size in a pig and the amount of time for a fetus and newborn to develop make the idea of a pig brain humanizing fairly implausible. Even so, to be absolutely safe, research protocol by the UC Davis groups requires that any piglet born from an embryo treated with human iPSCs be sacrificed by 28 days of age so that the brain can be studied.

More conventional objections to the research stem from people thinking about animal rights, particularly in connection with industrial farming.

“I’m nervous about opening up a new source of animal suffering,” Peter Stevenson, a lawyer and Chief Policy Advisor for Compassion in World Farming, said in an interview earlier this year. “Let’s first get many more people to donate organs. If there is still a shortage after that, we can consider using pigs, but on the basis that we eat less meat so that there is no overall increase in the number of pigs being used for human purposes.”

This sounds perfectly logical, although nearly 10 million pigs are killed in the United Kingdom for food, and roughly 117 million in the US. Comparatively, the increase needed to fill the organ gap, 8,000 in the US, looks like a small number. Not if you’re one of those 8,000 pigs, of course, but such pigs would otherwise never come to life, which could make for a tough dilemma.

On the other hand, considering experience with heart valves and other parts from pigs that have been used in many humans for medical purposes, the goal to preserve human health in all likelihood will win out. But as we approach this next medical crossroads, be prepared for a lively public discourse.